A cloud that took the form of a ‘hand of God’ holding a fireball dominated the skyline above the north coast the Portuguese island of Madeira at around 8 a.m. on Monday, Jan. 24. (Mercury Press)

END_OF_DOCUMENT_TOKEN_TO_BE_REPLACED

Buses carrying protestors cross Lisbon’s April 25th bridge on Saturday, Oct. 19 2013, to take part in a demonstration called by Portugal’s main union CGTP, General Confederation of Portuguese Workers, against the government’s austerity measures. A protest march across the bridge was forbidden by the government and the union opted to bring the protestors in buses from across the Tagus river. (AP Photo/Armando Franca) (The Associated Press)

END_OF_DOCUMENT_TOKEN_TO_BE_REPLACED

Have you ever seen a disaster movie that is so bad that it is actually good?  Well, that is exactly what Syfy’s new television movie entitled “Sharknado” is.  In the movie, wild weather patterns actually cause man-eating sharks to come flying out of the sky.  It sounds absolutely ridiculous, and it is.  You can view the trailer for the movie right here.  Unfortunately, we are witnessing something just as ridiculous in the real world right now.  In the United States, the mainstream media is breathlessly proclaiming that the U.S. economy is in great shape because job growth is “accelerating” (even though we actually lost 240,000 full-time jobs last month) and because the U.S. stock market set new all-time highs this week.  The mainstream media seems to be absolutely oblivious to all of the financial storm clouds that are gathering on the horizon.  The conditions for a “perfect storm” are rapidly developing, and by the time this is all over we may be wishing that flying sharks were all that we had to deal with.  The following are 10 reasons why the global economy is about to experience its own version of “Sharknado”…

END_OF_DOCUMENT_TOKEN_TO_BE_REPLACED 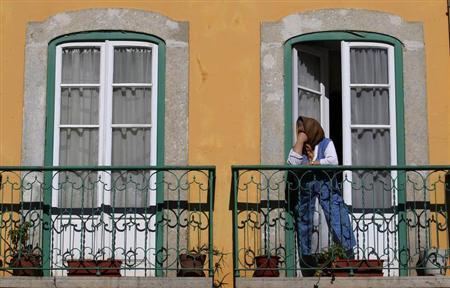 By Andrei Khalip and Daniel Alvarenga

(Reuters) – The Portuguese government approved around 800 million euros of new spending cuts on Thursday to put its EU/IMF bailout back on track after some of its austerity plan was thrown out by the constitutional court.

Budget Secretary Luis Sarmento told a news briefing after an all-night cabinet meeting that the latest cuts and some other measures would allow Lisbon to meet this year’s budget deficit target of 5.5 percent of gross domestic product and secure the next 2 billion euro tranche of its bailout.

The government will hope its new plan is resistant to fresh court challenges, but the cuts could still stoke public anger which brought hundreds of thousands of people onto the streets last month in opposition to austerity.

Keeping Portugal on course for a full return to the debt markets is an important goal for the euro zone, which has seen its path out of crisis blocked in recent months by a political stalemate in Italy and a financial collapse in Cyprus.

Representatives of Lisbon’s lenders from the European Union and International Monetary Fund were in Lisbon this week to help the government identify measures to compensate for the court’s ruling and work on wider structural cuts through 2015.

The government had been forced to cut spending further after the court on April 5 overturned a range of austerity measures set out in this year’s budget, leaving a hole of around 1.3 billion euros.

The new spending cuts that affect expenditure on public sector workers and other current spending are worth 0.5 percent of gross domestic product.

But the government said it would also use European Union structural funds, further renegotiate public-private partnership contracts and bring forward some structural spending cuts planned for 2014 and 2015 to plug the hole. The cuts will be detailed on Tuesday.

“These measures will guarantee that the eighth tranche of the bailout is disbursed to Portugal. The tranche depended on Portugal honoring the budget limits and that’s what we are after with these measures,” Regional Development Minister Miguel Poiares Maduro told the news briefing.

Portugal, which is in the grips of its worst recession since the 1970s, has already imposed the biggest tax hikes in living memory to try and bring down its deficit and exit its bailout program in 2014 as planned. In January it issued its first bond since the 2011 bailout and has been preparing another issue this year to regain full access to market financing.

Filipe Garcia, head of Informacao de Mercados Financeiros consultants in Porto said the new demonstration of the government’s will to comply with its bailout commitments and the fact that the court ruling had failed to trigger a political crisis supports Portugal’s credibility abroad.

“As for the measures themselves, it’s too early to say if they will be enough to meet the goals because there are no details and because some depend on third parties,” he added.

The center-right coalition government has a comfortable majority in parliament to pass bills and earlier this month easily defeated a no-confidence motion by the main opposition Socialists who have ruled out cooperating with the government on further austerity measures.

In a statement, Portugal’s lenders said they would continue to discuss the measures with the government and hoped to complete the latest review in a timely fashion.

The government will submit amendments to this year’s budget to parliament by mid-May.

The country’s benchmark 10-year bond yields that spiked to around 6.7 percent after the court ruling have since slipped back to about 6.2 percent – not far from January’s levels of 5.9 percent – the lowest since late 2010. They were little changed on Thursday.