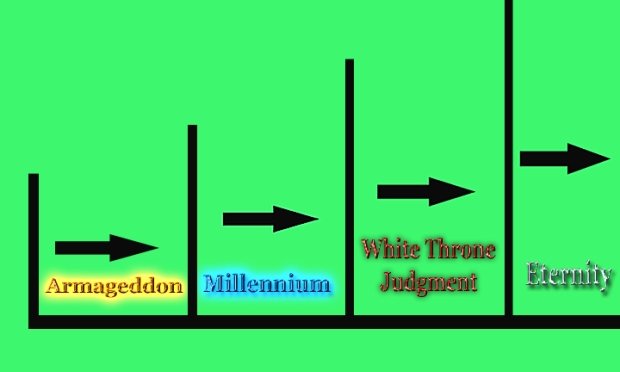 There is good news for the believers who remain alive on earth after Armageddon and Christs return.  He will rule the Earth for 1000 years!  Life expectancy will increase dramatically.  This 1000 year period is referred to as the “Millennium”.  There will be peace on earth until the end of the 1000 year reign.  Isaiah, a prophet from the old testament prophesied the future.

“I will rejoice in Jerusalem and be glad in my people; no more shall be heard in it the sound of weeping and the cry of distress.  No more shall there be in it an infant who lives but a few days, or an old man who does not fill out his days, for the young man shall die a hundred years old and the sinner a hundred years old shall be accursed.  They shall build houses and inhabit them; they shall plant vineyards and eat their fruit.  They shall not build and another inhabit; they shall not plant and another eat; for like the days of a tree shall the days of my people be, and my chosen shall long enjoy the work of their hands.  They shall not labor in vain or bear children for calamity, for they shall be the offspring of the blessed of the Lord, and their descendants with them.  Before they call I will answer; while they are yet speaking I will hear.  The wolf and the lamb shall graze together; the lion shall eat straw like the ox, and dust shall be the serpent’s food.  They shall not hurt or destroy in all my holy mountain,’ says the Lord.”

How do I know that this passage is speaking of the 1000 year millennium?  Well, I don’t for sure.  However, the passage mentions people living long lives.  If this were after a new heaven and earth, there will be no one around in a mortal body.  Christ will have already judged those at the end of the millennium and all those alive in the book of life will be given new immortal bodies, like during the rapture.  It clearly states that his people will live as long as trees.  It also mentions wild animals living together in peace and harmony, that they shall not hurt or destroy in all of God’s holy mountain.  When on earth has this ever happened, other than at the creation of Adam and Eve?  Never has, never will until this time.

The book of Revelation also speaks of the 1000 year reign of Christ.

“2 He laid hold of the dragon, that serpent of old, who is the Devil and Satan, and bound him for a thousand years; 3 and he cast him into the bottomless pit, and shut him up, and set a seal on him, so that he should deceive the nations no more till the thousand years were finished.

4 And I saw thrones, and they sat on them, and judgment was committed to them. Then I saw the souls of those who had been beheaded for their witness to Jesus and for the word of God, who had not worshiped the beast or his image, and had not received his mark on their foreheads or on their hands. And they lived and reigned with Christ for a thousand years. 5 But the rest of the dead did not live again until the thousand years were finished. This is the first resurrection. 6 Blessed and holy is he who has part in the first resurrection. Over such the second death has no power, but they shall be priests of God and of Christ, and shall reign with Him a thousand years.”

God will bind Satan, the devil, and cast him into the bottomless pit for a thousand years.  During this time only those who have not worshiped the beast (Satan) will live and reign with Christ.  Whoever has part of the “first resurrection” is blessed and holy!  The first resurrection is composed of believers who accepted Christ before the 1000 year Millennium period, the “second resurrection” is for the unbelievers, the unsaved who did not accept Christ before this time.

So what happens to the people who are born into this world during the 1000 year Millennium?  What if they reject Christ?  Revelation chapter 20 goes on to tell us what will happen.

“7 When the thousand years are over, Satan will be released from his prison 8 and will go out to deceive the nations in the four corners of the earth—Gog and Magog—and to gather them for battle. In number they are like the sand on the seashore. 9 They marched across the breadth of the earth and surrounded the camp of God’s people, the city he loves. But fire came down from heaven and devoured them. 10 And the devil, who deceived them, was thrown into the lake of burning sulfur, where the beast and the false prophet had been thrown. They will be tormented day and night for ever and ever.”

Just like the passage states, Satan will gather together all of those people who have rebelled against God.  They shall come against the believers for battle.  However, God destroys them with fire from heaven.  This does not mean that they shall not endure hell, rather their bodies will be resurrected for final judgment, the “Great White Throne Judgment”.

Anyone whose name was not found in the book of life was thrown into the lake of fire.  That would be everyone present at this judgment.  None of them shall escape, this is the second death.  They shall all live for eternity in hell!  Read: Hell.

‘Then I saw “a new heaven and a new earth,” for the first heaven and the first earth had passed away, and there was no longer any sea. 2 I saw the Holy City, the new Jerusalem, coming down out of heaven from God, prepared as a bride beautifully dressed for her husband. 3 And I heard a loud voice from the throne saying, “Look! God’s dwelling place is now among the people, and he will dwell with them. They will be his people, and God himself will be with them and be their God. 4 ‘He will wipe every tear from their eyes. There will be no more death’ or mourning or crying or pain, for the old order of things has passed away.”

5 He who was seated on the throne said, “I am making everything new!” Then he said, “Write this down, for these words are trustworthy and true.” ‘

All those placing their trust, faith and salvation in Jesus Christ shall be God’s people.  He will be with them for all eternity!  They shall neither die, nor mourn, nor cry or feel any pain.

‘3 And I heard a loud voice from the throne saying, “Look! God’s dwelling place is now among the people, and he will dwell with them. They will be his people, and God himself will be with them and be their God. 4 ‘He will wipe every tear from their eyes. There will be no more death’ or mourning or crying or pain, for the old order of things has passed away.”

5 He who was seated on the throne said, “I am making everything new!” Then he said, “Write this down, for these words are trustworthy and true.”

6 He said to me: “It is done. I am the Alpha and the Omega, the Beginning and the End. To the thirsty I will give water without cost from the spring of the water of life.

7 Those who are victorious will inherit all this, and I will be their God and they will be my children.‘

Don’t miss out on this “Once in a Lifetime Opportunity!”

Accept Jesus now as your personal Lord and Savior!