Hello all, I hope and pray that you are safe and well.

Last night I had a very real dream, except that it was in black and white.  This is very strange, due to the fact that most of my dreams are always in color.  I’m not saying that it was or wasn’t a prophetic dream.   But, living in the times that we are I thought best to share it.   This dream pertains to America.

The dream took place on a long sandy beach along the coastline somewhere in America.  I do not know the exact location.  I was sitting on the beach with a small group of people, there were seven or eight of us in all.

It was very, very dark and you could not really see much of anything.  I looked out over the water at the horizon and noticed that it lit up.  When I scanned the horizon I noticed strange cloud formations along the horizon line.  First I noticed one mushroom cloud, then two, then three, then four.  I called out to everyone that was with me to look!  Look quick! After that I noticed explosions in the water, much, much closer to us.  It was like when a very large person jumps off of a diving board into a pool of water and creates a large splash, except these splashes were much, much larger. 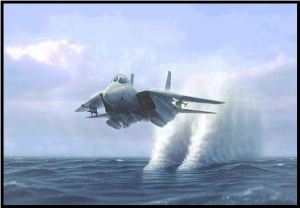 As I saw the splashes I began to hear the sound of very low flying aircraft.  Lots of aircraft, not commercial jets, but fighter jets.  I yelled for everyone to take cover and stay down!  I then told everyone not to turn on any lights, “keep them off, all of them” I yelled!

The next thing I knew the aircraft were just about on top of us and all that you could hear was gun fire.  Loud, fast and unforgiving gun fire.  I cried out to God to keep us safe!  I could feel the wind from the bullets hitting the beach all around me.  I thought for sure that I was a goner.  One hit from this attack and my life would be ended.  It seemed unending!  The planes kept coming, in swarms, one after another.  I looked up in the sky ahead of me and could make out dark silhouettes of fighter jets streaming past us.

After the jets had all passed I looked towards the direction of the planes and saw many, many large, bright explosions!  One after another, explosion after explosion, unrelenting!

I looked around for all of my friends, everyone was ok, no one was hurt.  Thank God!

That’s it.  My dream ended.  I woke up and replayed the dream over and over in my head.  Thinking, what in the world?  I didn’t think too much about it until I started waking up more.  Then I thought that maybe, just maybe it was a vision from God.  So, I got up out of bed and started writing this post.

We are living in perilous times my friends.  Perilous times.  God told us that events such as this were to happen in the end times, before the return of Christ.  I have had other visions and dreams.  All have been true so far.  I have not always been 100% accurate in my interpretation of my dreams and visions (I am working on that, asking God for the gift of interpretation).  Like the vision I had of darkness, evil and demonic spirits (“Vision Warning”).  I thought that this pertained to Israel perhaps, although I did not say for sure.  It turns out that I now believe it was a warning for the increase in demonic spirits and evil increasing in intensity throughout the world.

Take this dream for what you will.  Pray about it.  Ask God for your protection.  Pray for the saints and all Christians around the globe.

God said in Acts 2:17 NIV
“In the last days, God says, I will pour out my Spirit on all people. Your sons and daughters will prophesy, your young men will see visions, your old men will dream dreams.”

Well, I guess that I am sort of in the middle, I see visions and have dreams.  God said that it would happen and it is.  I know of many, many other people who have visions and dreams as well.  What about you?  Have you had any visions or dreams lately?

God Bless you all!  Jesus is coming quickly.  We don’t have much time left.  If you are not a Christian, accept Jesus now as your personal Lord and Savior!  Click Here!

7 thoughts on “I Had a Dream….America Attacked!”