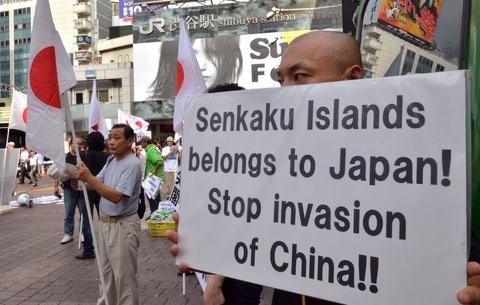 Zukang cautions against hostilities over “those two tiny rocks”

END_OF_DOCUMENT_TOKEN_TO_BE_REPLACED

Something is amiss. Most Americans know this – they can feel it deep down inside – even if they don’t know what it is, things just don’t seem right.

The signs are everywhere. The headlines are true.

The global economy is faltering. The United States has become wholly dependent on the Federal Reserve injecting nearly $1 trillion dollars a year into financial markets and the U.S. government just to stay afloat. Over one hundred million Americans are living in poverty and dependent on government disbursements just to make ends meet.

Across the world the cold war between the U.S., Russia, China and regions in the middle east is heating up. Just last month our President brought the entire planet to the very brink of what could have easily devolved into conflict on such a scale that even global leaders were suggesting that World War III was imminent. War mongers in Congress were so adamant about launching a middle east strike on Syria that one of them even suggested a nuclear weapon could be detonated over South Carolina if we failed to act.

END_OF_DOCUMENT_TOKEN_TO_BE_REPLACED

The Iranian military has test-fired three new missiles of a previously untested type, the country’s Fars news agency reported Saturday.
“Three types of missiles developed by the army and the defense industries have been successfully test-fired in the Ground Force’s recent war games,” Fars quoted Iranian Army Ground Force Lieutenant Gen. Kioumars Heydari as saying.  Heydari said the missiles were of a previously untested type, “different from the Naze’at 10 and the Fajr missiles.”

The Naze’at 10 is a long-range artillery rocket capable of reaching targets between 110 and 130 kilometers away, while the Fajr 5 artillery rocket has been used against Israel in the past few years by Hezbollah, Hamas and Palestinian Islamic Jihad militants.

A top army official told the news agency that the purpose of the trials was to deter Iran’s enemies from striking it. Iranian President Mahmoud Ahmadinejad has made similar statements in the past.

Also on Saturday, Iranian Ambassador to Paris Ali Ahani warned that Tehran’s response to any Israeli aggression would be so crushing that it could trigger a third world war with unprecedented consequences.

“A potential Israeli attack on Iranian territories to hit a blow at its scientific and nuclear facilities is sheer madness and its consequences are catastrophic and uncontrollable,” Fars quoted the envoy as saying.

“Iran will not sit silent under such an aggression. Such a move can trigger a series of violence which will possibly lead to the World War III,” Ahani reportedly said, citing IAEA Resolution 533, which prohibits “all armed attacks against nuclear installations devoted to peaceful purposes whether under construction or in operation.”

North Korea has threatened to send missiles to Guam, Hawaii and the US mainland – presumably by air mail. The country is broke, its weaponry is archaic and its computer technology little more than an old space invaders game nicked from a London pub in the 1980s. And yet it has ramped up its war on the rest of the world. Why?

One novel explanation comes from a website run by North Koreans living in exile. It says that Pyongyang’s declaration of “Grade 1 War Readiness” has a specific and surprising translation: it means that the country is preparing itself not to defend its citizens or even the motherland but rather the “dignity” of the ruling Kim clan – including all the artwork that depicts them. The phrase “Grade 1” refers specifically to the Kims and, from that proposition onwards, things get really weird:

North Korea has declared a Protection Order regarding the portraits of Kim Il-sung and Kim Jong-il, as well as related images and artefacts. An emergency meeting was convened among North Korean officials stationed abroad in relation to the recent declaration of ‘Grade 1′ War-Readiness by the Supreme Command of the KPA, according to our sources. Contrary to expectations, the meetings were not concerned with the state of war-readiness within North Korea.

This explanation of North Korea’s increased war preparations – that it wants to protect all the sculptures, paintings and tea coasters bearing Kim’s image – might seem far-fetched, but it’s actually based in a serious reality with potential consequences for the rest of the world. Knowing that North Koreans are expected to revere statues of the Kim family, South Korea has responded to recent attacks from the communist state by threatening to blow those artworks up. From the Chosun Ibo newspaper:

The statues are considered sacred in the North, and any damage to them could deliver a huge psychological impact. “If North Korea launches another provocation, our military has developed a plan to respond with air-to-surface and surface-to-surface missiles to strike not only the source of provocation as well as support and command forces, but also some statues of Kim Il-sung and Kim Jong-il,” a government source here said Sunday.

The North Korean dissident website concludes that this is the real context for the threat to strike the US mainland with missiles: it’s terrified that Seoul is about to demolish some of its 35,000 statues of the Kims.

As I’ve argued many times before, we don’t need to worry too much that North Korea is going to trigger World War III. It cannot deliver on its threat to wipe out California and its military posturing is about a) reminding the rest of the world that it exists and b) asserting political integrity at home. But how remarkable to imagine – if this is indeed true, and there’s always reason to be sceptical about anything involving North Korea – that the latest geopolitical crisis is informed by the threat posed to some tacky communist artwork. Of course, regardless of the theory’s veracity, it’s also absurd that a Marxist state should regard statues as icons worthy of starting a war to save. Communism is supposed to be a materialist doctrine that has no space for religious worship, and yet it is so often communist regimes that embalm their leaders or cover the landscape with shrines to tin-pot heroes. As ideologies go, it wins top marks for enthusiasm but a big fat zero for irony.