FILE – In this Oct. 1, 2015 file photo, family members of sailors wave as the U.S. Navy aircraft carrier USS Ronald Reagan arrives at a U.S. Navy base in Yokosuka, Japan south of Tokyo. The U.S. Pacific Fleet is smaller than it was in the 1990s, helping fuel a debate about whether the U.S. has enough ships to meet challenges posed by fast-growing and increasingly assertive Chinese naval forces. (AP Photo/Eugene Hoshiko, File)

END_OF_DOCUMENT_TOKEN_TO_BE_REPLACED

Iranian naval vessels near the Strait of Hormuz, Jan. 3, 2012. Photo by Reuters

Iran’s Northern Navy Fleet commander says vessels already on way to Atlantic Ocean via waters near South Africa, and that this move ‘has a message.’

END_OF_DOCUMENT_TOKEN_TO_BE_REPLACED

Reblogged from “The Vine of Life News” 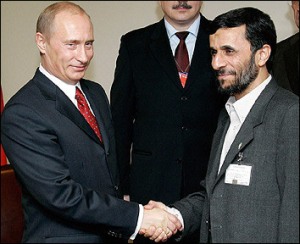 Regulars readers of this blog — and books like The Ezekiel Option and Epicenter – know that I’ve been writing about a growing and troublesome alliance between Russia and Iran since 2005. Given that history, I thought it would be important to bring thisNew York Post article to your attention today. The headline is, “Why Iran is falling into Russia’s arms,” and it’s written by Amir Taheri.

Taheri is an Iranian dissident and former editor-in-chief of an Iranian newspaper whom I find quite insightful about Iranian foreign and domestic policy and political intrigues. He was one of the first international journalists to  notice and begin reporting Mahmoud Ahmadinejad’s obsession with eschatology. After reading Taheri’s work, I began to study more closely Ahmadinejad’s pronouncements on the subject and began studying more carefully the substance of Shia End Times theology and its impact on Iranian foreign policy. While he was ahead of the curve on Ahmadinejad’s eschatology, Taheri is a little behind the curve on noticing the alliance forming between Russia and Iran. and its implications. Still, the good news is that he has focused on important new developments in recent weeks and is on to the story now.

Students of Bible prophecy will find all this particularly interesting. After all, the Hebrew prophet Ezekiel wrote 2,500 years ago that a dictator (Gog) from the territory we now call Russia (Magog) would form an alliance in the “last days” with Persia (what we now call Iran) and a group of other Middle Eastern countries. The goal of the alliance will be to threaten and then attack a prosperous and secure Israel in the years following Israel’s prophetic rebirth. Such an event has never happened in human history, but a growing number of Jewish and Christian Bible scholars and teachers believe geopolitical trends suggest the fulfillment of the “War of Gog and Magog” prophecy might not be so far off.

For now, I commend Taheri’s column to your attention.