Iranian President Hassan Rouhani, left, and Italian Premier Matteo Renzi talk to each during their meeting at the Campidoglio, Capitol Hill, in Rome, Monday, Jan. 25, 2016. Rouhani arrived Monday in Rome on the first state visit to Europe by an Iranian president in almost two decades, eager for foreign investments after the lifting of international sanctions. (AP Photo/Gregorio Borgia)

END_OF_DOCUMENT_TOKEN_TO_BE_REPLACED

Russia’s President Vladimir Putin looks over at the French president during their bilateral meeting on the sidelines of the G20 Summit in Brisbane, Australia, Nov. 15, 2014 (photo credit: AP/Alain Jocard, Pool)

END_OF_DOCUMENT_TOKEN_TO_BE_REPLACED 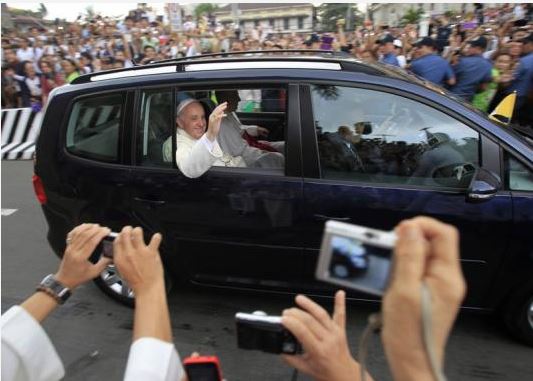 Pope Francis waves to the waiting crowds after a mass at the Cathedral in Manila January 16, 2015. REUTERS-Romeo Ranoco

END_OF_DOCUMENT_TOKEN_TO_BE_REPLACED

Pope Francis waves to people waiting on the road after crossing a row of decorated elephants standing to welcome him in Colombo, Sri Lanka, Tuesday, Jan. 13, 2015. Pope Francis arrived in Sri Lanka Tuesday at the start of a weeklong Asian tour saying the island nation can’t fully heal from a quarter-century of ethnic civil war without pursuing truth for the injustices committed. (AP Photo/Saurabh Das)

END_OF_DOCUMENT_TOKEN_TO_BE_REPLACED

SEOUL, Sept. 30 (Yonhap) — American aircraft carrier USS George Washington is due at South Korea’s southern port city of Busan next week to participate in joint naval drills as part of their routine training, a military source in Seoul said Monday.

The nuclear-powered 97,000-ton supercarrier, forward deployed to Japan’s Yokosuka as part of the U.S. 7th Fleet, is expected to carry out joint drills with the South Korean Navy in the East Sea, the source said.

The ship will arrive in Busan this weekend and carry out maritime training exercises with South Korean warships and Aegis destroyers for two or three days next week, he said.

“The training is expected to include aircraft carrier maneuver, anti-submarine drills and maritime training,” the source said, speaking under anonymity as he is not authorized to talk to the media. “It is a routine training conducted two or three times when a U.S. carrier makes a port call here.”

North Korea has condemned the allies’ joint drills as a prelude to war. In March, Pyongyang threatened to strike Seoul and the continental U.S. when the two nations’ forces conducted their annual drills involving stealth bombers, stealth jets and aircraft carriers.

The two Koreas technically remain at war as the 1950-53 Korean War ended in a truce, not a peace treaty.

US President Barack Obama, arriving in Israel on Wednesday, will be the guest of Prime Minister Benjamin Netanyahu for a rapid-fire presentation at the Israel Museum showcasing some of Israel’s best technology.

Israel, Netanyahu will tell Obama, has made unique contributions in the fields of medicine, agriculture, road safety, robotics, and more — and will prove it by showing him some of the world-changing innovations developed here.

Seven of Israel’s most important contributions — chosen by a committee of government and technology leaders — will be presented to Obama in the context of the museum’s “Israeli Technology for a Better World” exhibit. After touring the the exhibit, Obama will be introduced to the tech leaders of tomorrow in the form of three young Israelis who won a robotics contest last year with their Robowaiter, a special robot “butler” designed to help the disabled.

The half-hour presentation will show Obama the following products:

Phinergy aluminum-air battery for electric vehicles: The Phinergy battery solves a major problem of electric vehicles — the short range of travel provided by batteries before a recharge is needed.

The Phinergy battery allows a threefold increase in travel range over a  regular electric vehicle, with a much lower weight than conventional batteries. This is due to the fact that it is based on metal air technology which utilizes oxygen from the surrounding air instead of oxygen manufactured by heavy materials built into the battery. The result: A much lighter battery that can power cars for a significantly longer time than current batteries, solving the two issues that many believe are preventing electric cars from taking off.

Mobileye’s road safety alert system: No longer a start-up, Mobileye’s alert system, based on cameras and sensors, working in tandem with advanced software, tells drivers when they are too close to the vehicle in front of them, and when dangerous situations are likely to develop. The heads-up gives drivers an edge, making them more alert and giving them crucial extra seconds to prepare to deal with problem situations. The result: fewer traffic accidents.

The Robotic Snake: There are many disaster scenes where responders dare not tread, even if there are people who need help. A collapsed building is a deathtrap not only for those caught inside, but also for rescuers, whose slightest wrong move can set off an avalanche that will bury survivors, and themselves, alive.

Enter the Technion-developed Robot Snake, a miniaturized robot that slithers into such disaster areas. It’s light enough not to cause any more damage, and, equipped with cameras and sensors, it can lay out a path for rescuers to enter without further damaging the structure — as well as determine exactly where the survivors are. The system can be used in any situation where advance information about a situation is needed in order to prepare rescue teams to do their work.

ReWalk: Until not too long ago, the notion of a person without legs walking, much less running, was the stuff of science fiction. That was before ReWalk, which makes an exoskeleton suit with motorized legs  that power knee and hip movement to provide even paraplegics with “walking technology.”

Battery-powered for all-day use, ReWalk is  controlled by on-board computers and motion sensors, restoring  self-initiated walking without needing tethers or switches to begin  stepping. ReWalk controls movement using subtle changes in center of  gravity, mimics natural gait, and provides functional walking speed. The ReWalk does it all, from walking to climbing stairs to running marathons.

The MinDesktop: Using off-the-shelf technology, three Ben-Gurion University students developed a headset that allows users to control computers using  brainwaves or facial movements. The computer is controlled without a mouse  or keyboard by means of a headset that images the user’s brainwaves from 14  separate points. The system, which was developed by three software  engineering graduates, is designed to serve the physically handicapped who could not otherwise operate a  computer or other devices.

It’s still in its early stages, BGU said, but when fully developed, MinDesktop will revolutionize the way individuals with severe disorders like ALS are able to interact with society.

Robo-Waiter: Disabled people who have a hard time doing for themselves will, in the future, be able to rely on robots to perform many of their day-to-day tasks. Obama will receive a preview of that future, and the future scientists who will craft it, in the form of the Robo-Waiter, built by three junior high students from Haifa under the direction of Technion experts.

The rolling humanoid robot, complete with arms and an extension to grab items, is equipped with sensors, cameras, and software that allows it to “hear” commands. It’s a work in progress, but the students, along with the Technion, are working to perfect it. Even at its current stage, Robo-Waiter was good enough to win the Best Humanoid Robot prize at an international robotics contest in the US last year.

While many aspects of Israel are presumably well-known to Obama, its products and technologies, and the contributions they represent, may be less familiar, said Liran Dan, head of the National Information Directorate, one of the groups organizing the presentation.

“There are two  principal messages that we would like to emphasize during the visit,” he said. “First  and foremost is the deep connection between Israel and the US. Alongside  this, we would also like to present the products of the future  that originate in Israel and which will be used in many places around the world.”