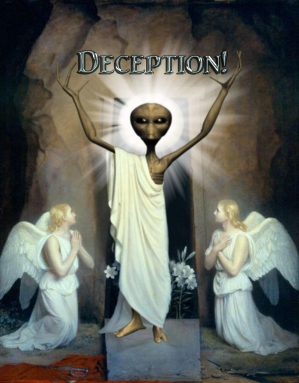 END_OF_DOCUMENT_TOKEN_TO_BE_REPLACED

Photo of mysterious lights in the sky.

END_OF_DOCUMENT_TOKEN_TO_BE_REPLACED

Well, well, well.  What have we here?  UFOs you say?  Alien beings?  From outer space?  Hmmmm.  Interesting, right?  Not!  These are all lies and deception fed to us by satanic spirits.  That is what these UFOs are.  They are demonic spirits manifesting themselves in the physical realm.  After all, God gave Satan and his demons dominion over the world and of the air.  Ephesians 2:2  “In which in time past you walked according to the course of this world, according to the prince of the power of the air, the spirit that now works in the children of disobedience.”  People have been and are continuing to be deceived.  This is a big lie that will usher in, I believe, the “Tribulation” period.  It will be one of, if not the main reason given for the rapture of the church.  The time is so close, we are seeing more and more strange sights in the air.  Hearing more and more of aliens and abductions.  The more we hear and see, the closer we get to the return of Jesus for the church!  Prepare, for time is short.   God Bless!

Participants say the time is now to tell Americans the truth

WASHINGTON—An unprecedented gathering of experts and witnesses will hold a citizen hearing about extraterrestrials engaging the human race, at the National Press Club (NPC) in Washington, D.C. from April 29 to May 3.

The U.S. Congress has not conducted an official hearing on the subject since 1968, in spite of much evidence and credible witnesses, according to Stephen Bassett, Executive Director of Paradigm Research Group. The Paradigm Research Group is an advocacy organization pursuing public awareness and open congressional hearings regarding an alien presence on earth.

To facilitate disclosure by the U.S. government, “We will hold a hearing that they won’t hold,” said Bassett at a press conference at the Sundance Film Festival earlier this year.

For the five day hearing, the main ballroom of the National Press Club (NPC) in Washington, D.C. will be converted to look like a Senate hearing room. The Hearing Committee will include former Senator Mike Gravel (D-Alaska), former Congresswomen Darlene Hooley (D-Ore.), Carolyn Kilpatrick (D-Mich.), Lynn Woolsey (D-Calif.), and former Congressman Merrill Cook (R-Utah). They will hear testimonies from 30-40 witnesses and grill them for answers.

Dr. Edgar Mitchell, Apollo 14 astronaut and sixth man who walked on the moon, is the international spokesperson for the citizen hearing.

At the Citizen Hearing on Disclosure press conference at the Sundance Film Festival, Dr. Mitchell said that disclosure should provide “vital information that we need to know.”

In a 1998 interview on the Art Bell Show, Dr. Mitchell explained why it is important for the public to know. “I think our representative democracy is in danger … I think events are moving so fast, so very rapidly, that no one is really on top of it, and if we don’t get the people mobilized here to demand that we get to the bottom of these issues … we’re not going to have an opportunity forever,“ he said, according to the citizenhearing.org website.

One of the expert witnesses is Richard Dolan, a University of Rochester historian who became one of the leading researchers on the topic. In his academic career, he studied U.S. Cold War strategy, Soviet history, and international diplomacy. He is co-author of the book: “A.D. After Disclosure: When the Government Finally Reveals the Truth About Alien Contact.”

In the book, Dolan elaborates on what “Disclosure” means: “It covers all aspects, all the moving pieces, all the complexity, of the event’s impact. You can disclose a fact about UFOs, but Disclosure is the event and the process. It encompasses all that happens when we say, ‘We are not alone.’”

According to Dolan, people who believe that UFOs are of extraterrestrial origin have steadily risen and now a majority of Americans believe it. Thanks in large part to constantly advancing technology, many people are becoming more and more effective at getting the evidence and communicating their findings to the world.

“Determined researchers have forced the release of classified reports prepared by the U.S. government and other nations,” he wrote.

Dolan and other researchers say that “Disclosure” is inevitable, and will happen sooner or later, with or without the cooperation of the U.S. government.

Not everyone welcomes such a disclosure. A Brookings Institution report advised NASA as early as 1960 that if evidence for advanced intelligent life other than humans were discovered on the moon or Mars and made public, it could destabilize society.

In Sept. 22, 2011, a petition was launched on We the People website urging President Obama to “formally acknowledge an extraterrestrial presence engaging the human race.”

A few weeks later, the White House responded: “The U.S. government has no evidence that any life exists outside our planet, or that an extraterrestrial presence has contacted or engaged any member of the human race. In addition, there is no credible information to suggest that any evidence is being hidden from the public’s eye.”

The citizen hearing from NPC will be live streamed on the Internet in English, Spanish, Arabic, Hindi, Japanese, and Mandarin.

The entire citizen hearing, including activities of key participants leading up to the event at NPC, will be filmed for a forthcoming documentary called the Truth Embargo by Just Cause Entertainment.