Lebanese army soldiers stand beside an armored vehicle with spent bullet casings littering the ground during clashes with Islamic militants, in the northern port city of Tripoli, Lebanon, Saturday, Oct. 25, 2014. Lebanese troops battled Islamic militants in Tripoli for a second day Saturday, with at least one person killed and a dozen people wounded in the clashes, the Lebanese army and state media said. (AP Photo)

END_OF_DOCUMENT_TOKEN_TO_BE_REPLACED 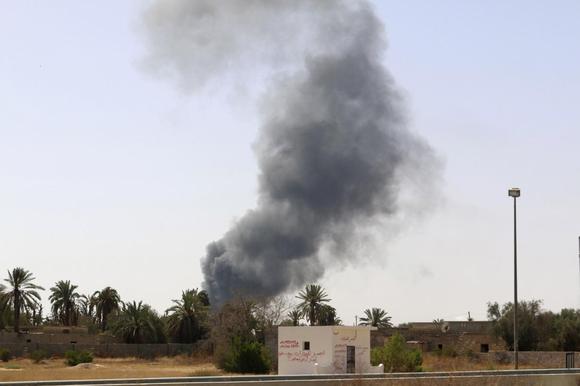 Smoke rises over the Airport Road area after heavy fighting between rival militias broke out near the airport in Tripoli July 25, 2014. REUTERS/Hani Amara

END_OF_DOCUMENT_TOKEN_TO_BE_REPLACED 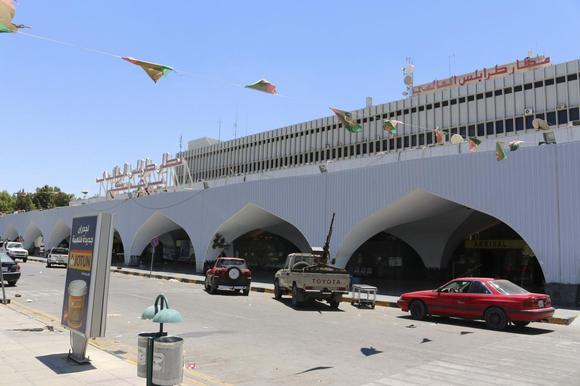 A general view of the front of the airport is seen after a shelling at Tripoli International Airport July 17, 2014.   Credit: Reuters/Hani Amara

END_OF_DOCUMENT_TOKEN_TO_BE_REPLACED

Libyan militants allied with terrorist groups stole millions of dollars in high-grade American military equipment, including armored Humvees and advanced night-vision goggles, during raids on a U.S. special forces base outside of Tripoli last summer.

Fox News reports that anonymous sources in the State Department and military confirmed the theft, which is far worse than the few guns first assumed stolen earlier this month. In addition to hundreds of M4 automatic rifles and Glock pistols, nearly every set of available night-vision goggles and laser-targeting devices were snatched during two night-time raids on the compound in July and August.

“It’s not just equipment… It’s the capability,” one source told Fox. “You are giving these dangerous groups the capability that only a few nations are capable of… All these militias are tied to terrorist organizations and are tied to [jihadist movements].”

END_OF_DOCUMENT_TOKEN_TO_BE_REPLACED

(BBC) At least 27 people have been killed and more than 350 injured by two blasts in Lebanon’s northern city of Tripoli, officials say.

END_OF_DOCUMENT_TOKEN_TO_BE_REPLACED 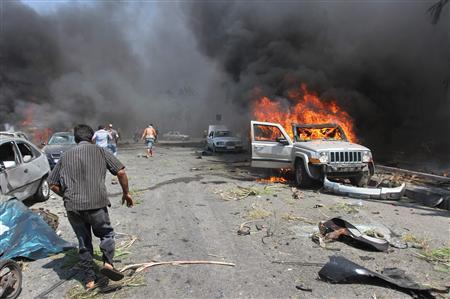 People run for help as a car burns outside one of two mosques hit by explosions in Lebanon’s northern city of Tripoli, August 23, 2013. REUTERS-Omar Ibrahim

(Reuters) – The death toll from twin blasts that hit two mosques in Lebanon’s northern city of Tripoli on Friday has gone up to 27, the health minister said.

“So far, we have 27 martyrs and 358 wounded,” Ali Hassan Khalil told Reuters.

Vehicles, mounted with anti-aircraft guns are parked outside the foreign ministry that has been surrounded by gunmen demanding it be “cleansed of agents” and ambassadors of ousted dictator Moammar Gadhafi on April 28, 2013 in the Libyan capital Tripoli. (Mahmud Turkia/AFP/Getty Images)

Esam al-Naas said 38 trucks, some mounted with machineguns, had surrounded the ministry on Sunday. The men allege that many supporters of the old regime are still occupying senior positions in the ministry and its missions abroad.

He said negotiations with the protesters are underway and that no one has entered the ministry building.

Gunmen stormed the headquarters of a privately-owned Libyan televisionstation on Thursday, abducting the channel’s owner and four journalists.

Alassema TV owner Jomaa Al-Osta and four of his staff were detained by unknown assailants, the parliament’s human rights commission said in a statement.

According to the AFP news agency, the commission urged the interior ministry “to intervene immediately to release the prisoners.”

Mohammed al-Sharkassi, an anchor at Alassema TV, told a national news channel he was seized briefly outside his workplace by “individuals who identified themselves as former rebels.”

Speaking on Libya al-Ahrar television, Sharkassi said he was questioned by his abductors and told he would be freed “on condition that I leave Tripoli.”

He said his abductors were “former rebels from Tripoli… angered by the editorial policies of Alassema TV”, but did not elaborate.

The station is known to be close to the liberal coalition which came ahead of Islamists in last July’s legislative elections.

Mahmud Jibril, who heads the National Forces Alliances coalition, was an architect of the 2011 revolt that toppled Moamer Qaddafi.

Libya al-Ahrar said that several attackers, some of them armed, stormed the headquarters of Alassema TV on Thursday afternoon.

“They entered through the windows,” it said.

Security forces were deployed outside Alassema TV following the attack, according toAFP.

Private newspapers and television stations have flourished in Libya since the ouster of Qaddafi, who had banned private media and any criticism of more than four decades of his iron-fisted rule.