UN warns situation in Eastern Ghouta ‘spiraling out of control,’ as 57 children are killed in bloodiest bombardments in four years

END_OF_DOCUMENT_TOKEN_TO_BE_REPLACED 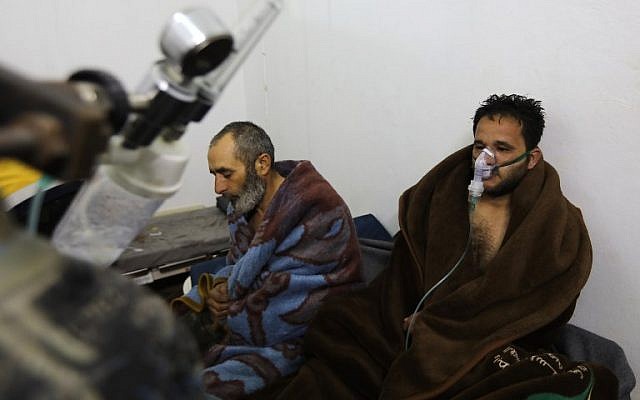 Syrians reportedly suffering from breathing difficulties following Syrian regime air strikes on the northwestern town of Saraqeb at a field hospital in a village on the outskirts of Saraqeb, due to the lack of hospitals in the town, on February 4, 2018. (AFP / OMAR HAJ KADOUR)

END_OF_DOCUMENT_TOKEN_TO_BE_REPLACED

An Israeli soldier looks through binoculars at a Syrian village from an army post on the border between Israel and Syrian on the Golan Heights (photo credit: AP Photo/Sebastian Scheiner)

No injuries or damage reported after Tel Fares hit END_OF_DOCUMENT_TOKEN_TO_BE_REPLACED

UNITED NATIONS (AP) — Syria’s foreign minister claimed Monday that his government is fighting a war against al-Qaida-linked militants who eat human hearts and dismember people while they are still alive, then send their limbs to family members.

Walid al-Moallem, addressing world leaders at the U.N. General Assembly in New York, also charged that the U.S., Britain and France had blocked the naming of the real perpetrators of chemical weapons attacks in Syria, which he blamed on the opposition.

President Barack Obama told the same forum last week that it was the President Bashar Assad’s regime that was behind a chemical weapons attack in August that killed hundreds in the Damascus suburbs and brought threats of a retaliatory U.S. strike.

After the U.S. threatened to attack Syria, the Assad regime committed to getting rid of its stockpiles of chemical weapons. The U.N. Security Council then voted unanimously on Friday to oblige it to do so based on a plan made by the Organization for the Prohibition of Chemical Weapons. The resolution broke 2-1/2 years of paralysis on the Syria conflict in the Security Council.

END_OF_DOCUMENT_TOKEN_TO_BE_REPLACED

Where are the demonstrations? The shocking disclosure that Syria’s civil war has claimed at least 60,000 lives has brought precious little reaction. To place this in context, President Bashar al-Assad’s murderous struggle to keep his stranglehold on power has now killed more people than any of the Arab-Israeli wars.

Not one of those conflicts, going back to and including 1948, was remotely as bloody as the conflagration in Syria. The nearest comparison is the Six Day War of 1967, which killed 23,500 Arabs and 1,000 Israelis – barely a third of the death toll in today’s Syria.

When Israel fought its last war in Lebanon in 2006, claiming 1,350 lives, there were daily demonstrations outside Israeli embassies across the world, particularly here in London. About 40 times as many people have died in Syria. So where are the protests? Syria still has an embassy in Belgrave Square, although admittedly its diplomats have been withdrawn. Why is there not a round-the-clock demonstration?

The people who tend to organise protests often voice their outrage about “Western double standards”. What about their own double standards? When Israel kills Arabs, they are easily stirred to outrage. When an Arab leader kills many more Arabs, they are less concerned. Meanwhile, the only round-the-clock political protest in London seems to be an ugly banner in Parliament Square protesting about Nato’s presence in Afghanistan. Wrong target, wrong place. What about protesting against Assad in Belgrave Square?