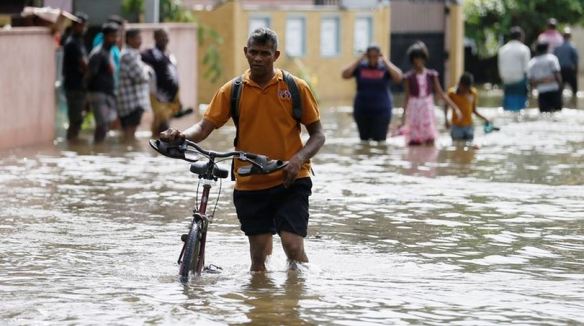 The flooding has displaced half a million people, Oxfam says. (Photo: Reuters/Dinuka Liyanawatte)

END_OF_DOCUMENT_TOKEN_TO_BE_REPLACED

The scene after a massive landslide in Kegalle District, about 72 kilometers (45 miles) north of Colombo, Sri Lanka, Wednesday, May 18, 2016. Massive landslides triggered by torrential rains crashed down onto three villages in the central hills of Sri Lanka, and more than 200 families were missing Wednesday and feared buried under the mud and debris, the Sri Lankan Red Cross said. (AP Photo/Eranga Jayawardena)

END_OF_DOCUMENT_TOKEN_TO_BE_REPLACED

Pope Francis waves to people waiting on the road after crossing a row of decorated elephants standing to welcome him in Colombo, Sri Lanka, Tuesday, Jan. 13, 2015. Pope Francis arrived in Sri Lanka Tuesday at the start of a weeklong Asian tour saying the island nation can’t fully heal from a quarter-century of ethnic civil war without pursuing truth for the injustices committed. (AP Photo/Saurabh Das)

END_OF_DOCUMENT_TOKEN_TO_BE_REPLACED

Australian authorities believe up to 55 asylum-seekers have drowned after their boat sank in the Indian Ocean, 65 nautical miles from Christmas Island.

Refugee campaigners and the Green Party criticised the rescue effort for being too slow to respond Photo: EPA

Local media also reported another boat in a similar area of the ocean sent a distress signal late on Sunday night.

Customs and Border officials, who are currently responding to the second boat, called off efforts to retrieve the bodies, as part of a joint operation with the Australian navy that was launched on Thursday when the boat disappeared.

It is believe the vessel carrying 70 people ran in to trouble when it’s engine failed and did not call for help. So far authorities have retrieved 13 bodies while those that survived are being treated by navy medical staff.

END_OF_DOCUMENT_TOKEN_TO_BE_REPLACED

Several people have been injured in Sri Lanka’s capital, Colombo, when Buddhist monks led hundreds in an assault on a Muslim-owned clothing warehouse.

Buddhist monks were filmed throwing stones at the storage centre of popular garment chain Fashion Bug in a suburb of the capital on Thursday night.

Police told AFP news agency that forces had been deployed to guard the area.

The attack comes as hard-line Buddhist groups step up a campaign against the lifestyles of Muslims.

The government’s Minister for Justice Rauff Hakeem, himself a Muslim, urged the prime minister to call an urgent cabinet meeting to discuss the security of Muslims following these attacks.

During Sri Lanka’s bitter civil war the Muslims – a small Tamil-speaking minority, about 9% of the population – kept a low profile, but many now fear that ethnic majority hard-liners are trying to target them.

The BBC’s Charles Haviland in Colombo said the monks led a crowd which quickly swelled to about 500, yelling insults against the shop’s Muslim owners and rounding on journalists seeking to cover the events.

Five or six were injured, including a cameraman who needed stitches.

Eyewitnesses said the police stood and watched although after the trouble spread they brought it under control.

“The situation was brought under control within a few hours,” he said, adding that no arrests had been made.

Television footage showed broken glass and clothing from the warehouse strewn in the street.

Hard-line Buddhist groups led by monks also sent around a text this week urging people to boycott Muslim shops when stocking up for the forthcoming Sri Lankan New Year festival.

After some Muslim groups called a strike in protest against a growing Buddhist campaign against their lifestyle, including halal food classification, a hard-line Buddhist party in the governing coalition issued a statement saying: “Sinhalese Buddhists should be determined to teach such Muslim extremists a lesson that they will never forget”.

The assault comes a day after police set up a hot-line to tackle complaints about anyone “inciting religious or racial hatred hatred”.

The Sri Lankan military is using rape and extreme sexual violence against men and women suspected of links to the defeated Liberation Tigers of Tamil Eelam (LTTE), according to a report by Human Rights Watch.

Human Rights Watch report of 75 cases of rape and sexual assault by members of the Sri Lankan security forces from 2006 to 2012 Photo: AP
SOURCE

The international human rights group said rape and sexual violence against Tamil Tiger suspects was common during the 26 year long civil war which ended with the LTTE’s defeat in 2009 but continues to be used today against the government’s political opponents.

Its report details 75 cases of rape and sexual assault by members of the Sri Lankan security forces from 2006 to 2012 – three years after the civil war ended when the army encircled the remaining LTTE forces in a tiny ‘no-fire zone’ in the far north of the country and killed most of its leaders.

The Sri Lankan government has been accused of war crimes for its conduct of the final stages of the war, including allegations that thousands of civilians were killed by shelling of the ‘no-fire zone’ but has rejected the claims as politically motivated. Opponents say it has developed a siege mentality and allowed a culture of impunity to continue.

Last week, Channel Four News published photographs it said indicated the son of the late LTTE leader Prabhakaran had been shot dead while in the custody of Sri Lankan security forces. The government has strongly denied the claims and said it believes photographs, showing the 12 year old boy alive in dead in army custody, were ‘morphed.’ These latest allegations of continuing abuses will further isolate Sri Lankan president Mahinda Rajapaksa and intensify international pressure on his government amid growing concerns over the country’s human rights record.

Human Rights Watch said it had interviewed most of the 75 victims whose cases it details after they had fled the country and said their testimony revealed that those detained as LTTE suspects remained under threat. “The Sri Lankan security forces have committed untold numbers of rapes of Tamil men and women in custody. These are not just wartime atrocities but continue to the present, putting every Tamil man and woman arrested for suspected LTTE involvement at serious risk.” said the group’s Asia director Brad Adams.

The victims accounts, many of which, it said, were corroborated by medical and legal statements, revealed a pattern of kidnap by unidentified men in plain clothes followed by interrogation and sexual assault in a detention centre by security servicemen.

A 32-year-old woman said she was stripped and photographed naked by two men in plain clothes who had abducted her.

“They told me to confess about everything. I refused to confess as I thought they would kill me. I was beaten up and tortured continuously. On the second day, a man came to my room and raped me. I was raped by different men on at least three days. I can’t remember how many times,” she told the group.

The Sri Lankan government has dismissed claims of human rights abuses as propaganda circulated by Tamil groups and political opponents.