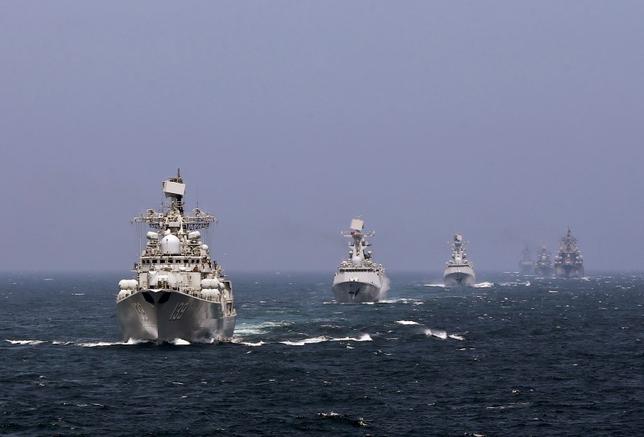 Chinese and Russian naval vessels participate in the Joint Sea-2014 naval drill outside Shanghai on the East China Sea, May 24, 2014. REUTERS/China Daily

END_OF_DOCUMENT_TOKEN_TO_BE_REPLACED

FILE – In this May 27, 2014 file photo, the USS Lassen is anchored in Yokosuka near Tokyo. The U.S. Navy is preparing to sail the USS Lassen near artificial islands built by China in the South China Sea in a long-anticipated challenge to what it considers Beijing’s “excessive claim” of sovereignty in those waters, two U.S. officials said Oct. 26. The officials said the White House approved the movement by the USS Lassen, a guided missile destroyer, around the Spratly Islands archipelago, a disputed group of hundreds of reefs, islets, atolls and islands in the South China. (AP Photo/Koji Sasahara, File)

END_OF_DOCUMENT_TOKEN_TO_BE_REPLACED 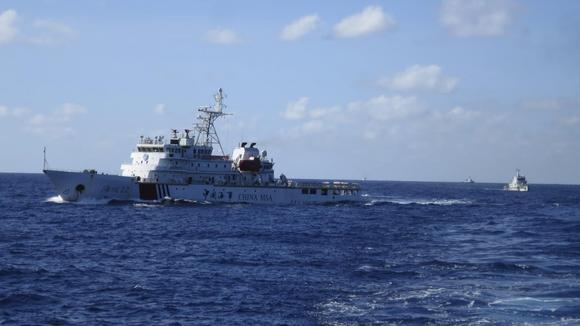 Chinese coastguard ships give chase to Vietnamese coastguard vessels (not pictured) after they came within 10 nautical miles of the Haiyang Shiyou 981, known in Vietnam as HD-981, oil rig in the South China Sea July 15, 2014. REUTERS/Martin Petty

END_OF_DOCUMENT_TOKEN_TO_BE_REPLACED 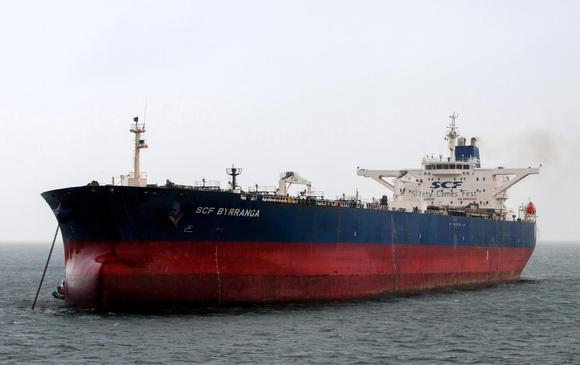 The oil tanker SCF Byrranga, which was renamed the United Kalavryta in March 2014 (also known as United Kalavrvta) and is currently off the coast of Texas with a cargo of Kurdish crude oil, is seen off the Isle of Arran, Scotland in this handout photo taken February 21, 2014. REUTERS/Tom Duncan/Handout via Reuters

END_OF_DOCUMENT_TOKEN_TO_BE_REPLACED

SOURCE – The so-called “2 plus 2” meeting in Tokyo this week of US Secretary of State John Kerry and Defence Secretary Chuck Hagel with their Japanese counterparts marked a significant escalation of the US military build-up against China. The lengthy joint statement announced major deployments of hi-tech US weaponry to Japan and a green light for Japanese remilitarisation, within the framework of “a more robust alliance”.Thursday’s talks took place in the wake of the Obama administration’s decision to postpone an imminent military attack on Syria last month in the face of mass popular opposition, both in the United States and around the world. The “2 plus 2” meetings make clear that despite the postponement of war with Syria, Washington’s plans for military escalation are proceeding apace.

END_OF_DOCUMENT_TOKEN_TO_BE_REPLACED

(Reuters) – China’s state media warned on Saturday that a “counterstrike” against the Philippines was inevitable if it continues to provoke Beijing in the South China Sea, potentially Asia’s biggest military troublespot.

The warning comes as ministers from both countries attend an Association of Southeast Asian Nations meeting in Brunei, starting Saturday, which hopes to reach a legally binding code of conduct to manage maritime conduct in disputed areas.

Both China and the Philippines have been locked in a decades-old territorial squabble over the South China Sea, with tensions flaring after the Philippines moved new soldiers and supplies last week to a disputed coral reef, prompting Beijing to condemn Manila’s “illegal occupation”.

END_OF_DOCUMENT_TOKEN_TO_BE_REPLACED

WASHINGTON – India recently test-fired a submarine-launched ballistic missile capable of carrying a nuclear warhead – something that is of serious concern not only to New Delhi’s arch-rival Pakistan, but also to China, according to report from Joseph Farah’s G2 Bulletin.

China recently has been concerned about India’s efforts to expand its influence in the East and South China Seas, where Beijing has asserted exclusive jurisdiction especially over maritime resources. Beijing is upset with India over its assistance to Vietnam in off-shore oil exploration.

At the same time, New Delhi has been equally concerned about China’s expansion into the Indian Ocean. Beijing strategists see the Indian nuclear ballistic missile submarine capability as threatening its access to the Indian Ocean through the Malacca Strait, where 25 percent of global trade takes place.

At the same time, India could use its future ballistic missile submarine force to block Chinese oil imports through the Strait, thereby causing major disruptions in the Chinese economy.

In response to this future prospect, China has set up a network of forward-deployed naval bases to protect its oil shipping lanes to the Middle East. Some of these facilities will be in the Indian Ocean, which New Delhi sees as a plan by Beijing to surround it.

However, New Delhi’s deployment of these SLBMs could complicate that strategy and actually position Indian submarines off of China’s shores, resulting in the threat to China of a ballistic missile attack.

India’s ability to launch a ballistic missile submarine will ensure that neither China nor Pakistan will be able to destroy New Delhi’s nuclear capability in a first strike. With the ability to launch a ballistic missile from a submarine, it completes New Delhi’s nuclear triad – launching a nuclear attack from land, sea or air.

The missiles will be placed on India’s Arihant nuclear submarine. It will be outfitted with four launch silos designed to hold 12 of the new missiles that have a range from 700 kilometers to 3,500 kilometers.

The Arihant is expected to be operational this year, with three more planned for construction and put into operation by 2025.

Sources say that this reflects a new Indian strategic direction to make the Indian Ocean its own area of influence in competition with the Pakistanis.