A truck rests off a washed out road outside of Columbia, S.C., Monday, Oct. 5, 2015. After a week of steady rain, the showers tapered off Monday and an inundated South Carolina turned to surveying a road system shredded by historic flooding. (AP Photo/Chuck Burton)

END_OF_DOCUMENT_TOKEN_TO_BE_REPLACED

A woman walks down a flooded sidewalk toward an open convenience store in Charleston, S.C., Sunday, Oct. 4, 2015. President Barack Obama declared a state of emergency in South Carolina and ordered federal aid to bolster state and local efforts as flood warnings remained in effect for many parts of the East Coast through Sunday. (AP Photo/Chuck Burton)

END_OF_DOCUMENT_TOKEN_TO_BE_REPLACED

An Amtrak train heading for New York City derailed early monday morning in Spartanburg County, South Carolina. Passangers were stuck on the train for over 8 hours.

The train had 218 passengers and crew members on board but no injuries were reported. The cause of the accident is under investigation.

END_OF_DOCUMENT_TOKEN_TO_BE_REPLACED

The Washington Free Beacon obtained a photo of a lone participant attending an Obamacare event in South Carolina, a testament to the massive unpopularity of the new federal healthcare law.

GetCoveredAmerica.org’s event took place earlier today in North Charleston, S.C. and was meant to educate citizens on the finer points of Obamacare. Unsurprisingly, it produced an abysmal turnout.

Public indifference is just one more speed bump obstructing the rollout of Obamacare.  An online healthcare exchange riddled with glitches has only added to frustrations, and has helped generate dismal enrollment numbers.

Last week, only 2 people reportedly showed up to a healthcare event in Greenville, South Carolina. 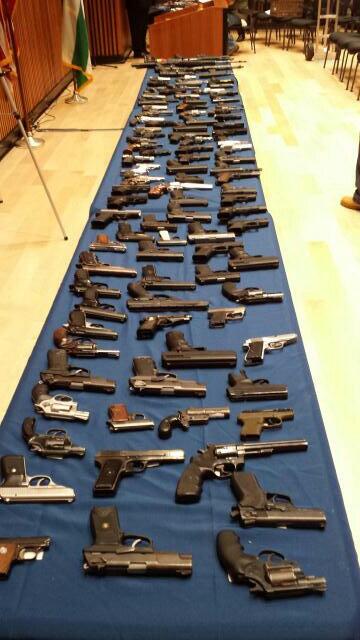 NYPDnews NYPD NEWS 2h
Half of the illegal guns seized by NYPD from traffickers in South & North Carolina, in arrests being announced today. pic.twitter.com/cwe3UKHMjU

NEW YORK (AP) — A pair of gunrunners smuggled firearms into New York City by hiding them in luggage they carried on discount buses offering cheap fares and lesser odds of getting caught, authorities said Monday.

The men were caught in a police sting that netted 254 weapons in 45 transactions since last year — the largest total from a gun case in recent memory. One of the guns was an assault rifle that was disassembled and transported in a girlfriend’s zebra-striped bag, authorities said.

The alleged smugglers, Walter Walker and Earl Campbell, were among 19 people arrested in New York, North Carolina and South Carolina as the result of a 10-month investigation. Also charged was an operator of a Brooklyn music recording studio where authorities said some of the deals took place.