In this photo provided by KWCH-TV, police vehicles line the road after reports of a shooting in Hesston, Kan., Thursday, Feb. 25, 2016.

END_OF_DOCUMENT_TOKEN_TO_BE_REPLACED 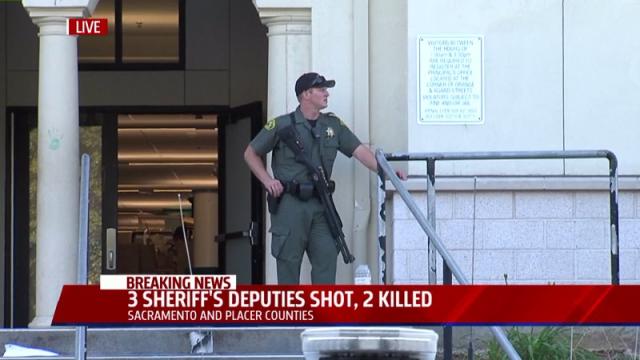 END_OF_DOCUMENT_TOKEN_TO_BE_REPLACED

A man and a woman were found dead in a Terrell, Texas, home after a shooting spree in the Dallas-area town left five people dead. A suspect was arrested early Oct. 29.(Photo: KTVT-TV 11)

END_OF_DOCUMENT_TOKEN_TO_BE_REPLACED

Authorities say a shooting spree through Orange County, Calif., has left four people dead, including the shooter, and two others injured before the man stopped and shot himself to death in a stolen car, police said.

The shootings began early Tuesday morning when deputies responding to a call of a carjacking found a female shot multiple times in a house in Ladera Ranch, said Orange County sheriff’s spokesman Jim Amormino. The city is in the southern part of the suburban county about 30 miles south of Los Angeles.

The shooter was said to be armed with two long guns.

The suspect, described as a man in his 20s, fled the scene in an SUV, according to the LA Times

Three more people were fatally shot in the next 25 minutes after carjackings in Tustin and Santa Ana.

Police say there were a total of six shooting scenes across the county.

The first call that came in was at Red Hill Avenue and Interstate 5. Police arrived and determined a carjacking had occurred and that victim was uninjured. An innocent bystander who was hit by gunfire was taken to a hospital, Garaven said.

The next call was at State Route 55 and McFadden Avenue. Another carjacking occurred and that victim died, Garaven said.

The last call was about a man with a gun, he said, at Edinger Avenue east of the 55. An officer arrived and found two more victims — one dead and the other injured.

Authorities located the suspect in a stolen vehicle and followed him to the city of Orange, according to Garaven. When police stopped him, the suspect shot himself at an intersection. Police recovered a shotgun from the scene.

Garaven says the suspect succeeded in stealing a vehicle at each carjacking.

“There have been other people coming forward saying they were shot at or their cars were shot at,” he said, but so far none had reported any serious injury.

The conditions of the wounded victims were unknown.

A spokeswoman for the California Highway Patrol said they didn’t have any active crime scenes on the freeway but the southbound 55 McFadden Avenue off-ramp would be closed until further notice.

The motive for the shootings is still unclear and it’s also unclear if the victims knew each other or the shooter.

“I do not believe any of the victims are related to each other. It might have been a random thing,” he said. “We just don’t know.”