END_OF_DOCUMENT_TOKEN_TO_BE_REPLACED

Details of the CIA’s “enhanced interrogation” techniques, considered by many to be torture, are set to be revealed in a long-awaited report

END_OF_DOCUMENT_TOKEN_TO_BE_REPLACED 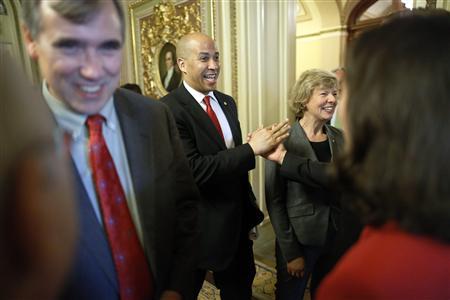 END_OF_DOCUMENT_TOKEN_TO_BE_REPLACED

It has been said that politics is the art of compromise. Try as they may, Washington leaders hardly ever get absolutely everything they want.

Polls show Americans are worried about the implementation of Obamacare — worried about keeping their current health insurance plans, the new law itself, the exchanges, potential fines, personal privacy, keeping their jobs, their work hours and a host of other issues too numerous to list here. Both the country and the Congress have much to discuss.

Right now, though, President Obama refuses to engage in any debate or discussion. The president is demanding that he get 100 percent of what he wants, and if he doesn’t, he and his Democratic allies in the Senate will keep the government shuttered.

Republicans have offered compromises that might stop or dull some of the negative effects of Obamacare but that would also pass a budget and keep the government functioning. Still, Mr. Obama refuses to budge. He will not even consider compromise.

END_OF_DOCUMENT_TOKEN_TO_BE_REPLACED

Former Minnesota governor Jesse Ventura smacked down members of Congress in a CNN appearance Tuesday, saying that the two parties are nothing more than political gangs feeding off the American people.

Appearing on Piers Morgan’s show, Ventura declared that Democrats and Republicans have essentially “legalized bribery” in the American legislature, and that the only way to fix the system would be to elect independents to office.

Commenting on the government shutdown, Ventura said “That should mean we shouldn’t have to pay any taxes, right?”

“I think it’s time for a revolt in this country. I’ve been advocating a revolution for years now.” Ventura said, adding “revolutions don’t have to be violent, but we need one, and I would tell everyone here, vote them all out of office and don’t vote in a new Democrat or Republican, vote for anyone BUT Democrats and Republicans.”

END_OF_DOCUMENT_TOKEN_TO_BE_REPLACED

The mood was grim at the Capitol Monday as Democrats and Republicans couldn’t get it together for the good of the nation.      SAUL LOEB/AFP/Getty Images

WASHINGTON — The first shutdown of the U.S. government in 17 years began early Tuesday as Congress bickered and bungled an effort to fund federal agencies due to a bitter ideological standoff over Obamacare.

The embarrassing disruption that an angry President Obama said was “entirely preventable” and would “throw a wrench into the gears” of the country’s recovering economy was triggered as a midnight deadline passed without agreement between the Republican-controlled House and Democrat-run Senate.

Senate Majority Leader Harry Reid (D-Nev.) disclosed at midnight that the White House budget office had directed agencies to start closing up shop. He then called a recess until 9:30 a.m., meaning that there would be no House-Senate deal in the wee hours Tuesday.

END_OF_DOCUMENT_TOKEN_TO_BE_REPLACED

It appears investors (CDS markets, VIX, T-Bills anxiety) were on to something as each side in the  looming government shutdown debate seems mired in their own belief that the other has more to lose. House Republicans are aiming to hold a vote today on a bill to extend government funding through December 15th and ensuring the military gets paid on any shutdown, but…

And as the WSJ reports, Harry Reid has already stated that “we are going to accept nothing as it related to Obamacare,” before adjourning the Senate until Monday afternoon (narrowing the gap for a shutdown-avoidance vote). The shutdown-blame-game has begun as it seems the ball is back in the Senate’s court…

– BOEHNER SAYS WILL BE `UP TO THE SENATE’ TO AVOID SHUTDOWN

END_OF_DOCUMENT_TOKEN_TO_BE_REPLACED

Senators from both parties linked arms to defy Sen. Ted Cruz, overcoming his attempt to filibuster the stopgap spending bill, which allowed Democrats to add back in full funding for Obamacare and power the bill through the chamber.

The 79-19 vote saw 25 Republicans join with all Democrats to advance the bill, easily overcoming Mr. Cruz and his allies who had argued this was the key point that would determine whether major parts of President Obama’s health care law take effect next week.

Once that hurdle was cleared, the rest of the votes were preordained. The Senate waived budget rules, voted to strip out the Obamacare defunding on a 54-44 party line vote, and passed the bill.