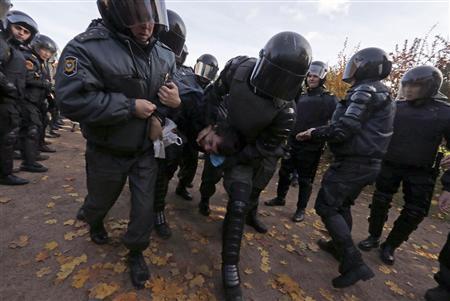 Police detain an anti-gay protester who took part in a gathering to prevent gay rights activists from staging a protest in St. Petersburg October 12, 2013. REUTERS-Alexander Demianchuk

END_OF_DOCUMENT_TOKEN_TO_BE_REPLACED

ST. PETERSBURG — An Allegiant Air flight bound for St. Petersburg-Clearwater International Airport made an emergency landing Sunday night in Georgia, where its 155 passengers were told to evacuate the plane — and then placed on buses to drive the rest of the way.

“The pilots had an indication of a possible fire in the cargo hold,” said Allegiant spokesman Brian Davis. “In an abundance of caution, they made the decision to land and get everyone off the plane.”

Everyone evacuated safely using the escape chutes and no one was injured. Flight 863 was en route from Cedar Rapids, Iowa, and landed in Albany, Ga. It wasn’t clear late Sunday whether there actually had been a fire.