Palestinian Authority will turn to Security Council after Abbas’s address to UNGA, demanding pullout in 3 years to pre-67 lines

END_OF_DOCUMENT_TOKEN_TO_BE_REPLACED 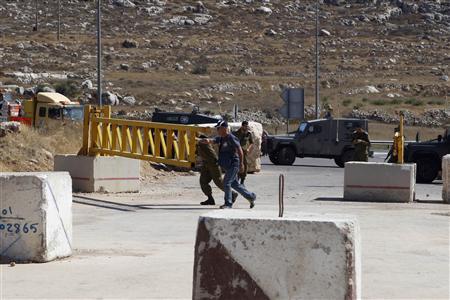 Israeli soldiers and a security personnel open the gate of a check-point in the West Bank city of Hebron July 21, 2013.
REUTERS/Mussa Qawasma

(Reuters) – The Palestinians played down on Monday the significance of an imminent meeting in Washington of their top peace envoy with his Israeli counterpart, saying formal negotiation would not begin unless their opening terms were satisfied.

The Palestinian position seemed to run counter to U.S. hopes that bringing together Saeb Erekat and Israel’s Tzipi Livni in the coming days would kick-start peacemaking stalled for almost three years over Jewish settlements in the occupied West Bank.

In another setback to the negotiators’ meeting, Israeli Prime Minister Benjamin Netanyahu planned first to seek cabinet-level approval for the prospective new talks, which were announced by U.S. Secretary of State John Kerry on Friday.