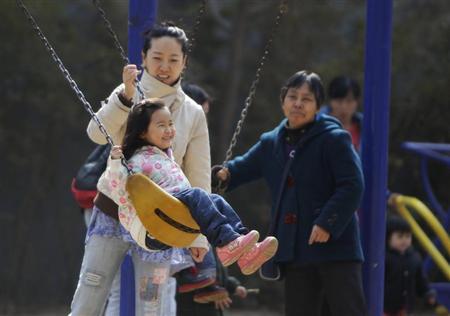 A mother pushes her daughter on a swing in Beijing April 3, 2013. REUTERS/Jason Lee

END_OF_DOCUMENT_TOKEN_TO_BE_REPLACED

A newborn baby girl died in China after her mother threw out of the window of a block of flats, the latest in a series of infanticide cases that have appalled the Chinese public and reignited debate about the country’s one child policy.

Footage uploaded to YouTube shows the street where the incident happened

Surveillance footage aired by a local TV station showed a bag containing the newborn plummeting to the road outside the building in the north-eastern city of Harbin. After hitting the ground, it was run over by a car.

The mother, identified by the local state Shenghuo Newspaper as an 18-year-old hairdresser with the surname Zhang, had given birth on Tuesday in the bathroom of a flat she shared with some 10 people.
Soon after the delivery she walked to a window between the second and third floors of the building and threw out the newborn.
END_OF_DOCUMENT_TOKEN_TO_BE_REPLACED

More than half a billion birth control procedures, including at least 336 million abortions, have been performed in the name of the one-child policy, China’s Health ministry revealed yesterday.

The figure illustrates the enormous impact that the one-child policy has had on China in the four decades since it began.

Official statistics showed that in addition to the terminations, Chinese doctors have sterilised 196 million men and women since 1971.

Perhaps unexpectedly, most people in China support the one-child policy, believing that the country would have suffered an impossible drain on food and resources without it, according to a 2008 survey by the Pew Research Centre, which found more than three in four Chinese were in favour.

There are more than 13 million abortions a year, or 1,500 an hour, in China, according to government researchers, who blame the high figure on a lack of sex education.

Fewer than ten per cent of sexually active couples regularly use condoms, according to the state-run Science and Technology Research Institute. By comparison, there are roughly 11 million abortions each year in India.

China’s demographics have been dramatically skewed by strict family planning. Last year, the working age population shrank for the first time in 50 years, a serious threat in an economy built on a huge pool of cheap labour.

The incoming Chinese leadership has already moved to dismantle the Family Planning Commission, which has enforced the one-child policy, sometimes brutally.

“Where else in the world can you find a Family Planning bureau? It was quite appropriate to fold it into the ministry,” he added.

Wang Feng, a population expert and director of the Brookings-Tsinghua Center for Public Policy in Beijing, told the Wall Street Journal that the government had begun the process of bringing the policy to an end.

Government officials have said the merger will not affect this year’s family planning targets. But Mr Wang said the denials were “a measure to save face and a recognition that they can’t announce all the change in one day”.

“The National Population and Family Planning Commission was created for a single mandate of controlling population growth and now they no longer have that, those powers have been dissolved.

“What the government is doing is a major political move and they cannot make or announce all the policy changes that go along with it in one day. They know they cannot dismantle everything all at once. It is going to take some time.”