The victim was knifed in the shoulder and abdomen on an uptown 6 train approaching the 59th St. station about 10:05 a.m. Monday, officials say.

A good Samaritan grabbed the suspect and dragged her to Bloomingdale’s, which has an entrance at the subway level. From there, security guards called authorities.

The crazed suspect, 32, stabbed the victim in the shoulder and abdomen on an uptown 6 train as it approached the 59th St. station about 10:05 a.m., officials said. The attacker also punched at least one other person, cops said.

“She was crazy,” an MTA employee who witnessed the attack said of the stabber, who appeared to be in her 20s.

“She was just targeting random people. She stabbed a woman in the shoulder and stomach with a steak knife.”

A good Samaritan grabbed the suspect and dragged her from the station to Bloomingdale’s, which has an entrance at the subway level, witnesses said.

END_OF_DOCUMENT_TOKEN_TO_BE_REPLACED 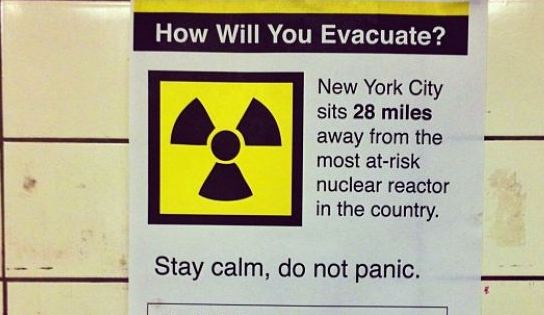 A number of mock posters have been popping up in New York City subways which effectively bring awareness to very real events like the recent odorless gas ‘terror drill’ by the NYPD as well as existing nuclear threats to the city.

I was first alerted to these posters via news tips, where readers were wondering what the deal was with the strange and Orwellian posters. Well as the hashtag  ’#Greywater’ reveals, which is placed at the bottom of the poster, these posters are definitely not ‘official’ posters placed by the NYPD or the city itself. Instead, they are likely marketing tools for the Greywater alternative energy company (finding their website was pretty simple), but they are also quite informative. Checkout one of the posters warning of a terror drill involving odorless and ‘harmless’ gas, which is actually based on a real police test as reported on by RT.

One of the mock posters found in the NYC subway warning of a future terror drill based on a real previous test.

What’s great about these posters is that they turn on the brain of the average passerby who would have otherwise continued on without a single thought on the subject. I would even imagine that many citizens of the city had no idea that the NYPD announced the real drill back in April of this year. The best part is that the poster isn’t much different from the real announcement. Citizens were basically told very few details beyond the fact that the police will be releasing odorless and ‘harmless’ gas throughout the city on 3 non-consecutive days in order to conduct a terror test.

There’s also a poster centered around nuclear concerns that plays on New York City’s close vicinity to nuclear power plants, which the Physicians For Social Responsibility website shows could lead to the emergency evacuation of over 17 million people in the event of a major plant incident that allowed for evacuations. A scenario that would quickly turn chaotic in a major city where citizens are entirely unprepared for any major event. You can see this one below:

While these posters are obviously created by entities outside of the New York City government, and most likely printed up by the Greywater company to perhaps generate awareness and create a viral marketing campaign, I think they’re effective in inciting some conversation. Twitter is already on the case, asking what the heck is up with the random posters, and hopefully the question will soon turn from ‘what are these posters’ to questions over the reality of the issues mentioned by the posters.