Images taken by the Colombian Air Force show some of the destruction caused by the landslide, May 18, 2015.    | Photo: @FuerzaAereaCol

With many reported missing, the death toll is expected to rise

END_OF_DOCUMENT_TOKEN_TO_BE_REPLACED

Officials shut down access to the area on Eagle Ridge Drive and homes in the area are being evacuated. Officials are evacuating all homes on Parkway Drive in North Salt Lake. No injuries have been reported so far.

END_OF_DOCUMENT_TOKEN_TO_BE_REPLACED

Rescuers and local residents conduct rescue work at the site of a mudslide in Dai-Jingpo Autonomous Prefecture of Dehong, southwest China’s Yunnan Province, July 21, 2014. The mudslide happened at around 6 a.m. Monday in Huna Village of Monghai Tow, where 13 houses were crushed and dozens of others damaged. The local public security bureau said the death toll reached ten, ten are missing and another seven were injured as of 4 p.m. Monday. [Photo/Xinhua]

END_OF_DOCUMENT_TOKEN_TO_BE_REPLACED

At least 350 confirmed dead as rains cause hill to disintegrate, covering village in masses of mud

END_OF_DOCUMENT_TOKEN_TO_BE_REPLACED

Vehicles and debris are seen from a massive mudslide that struck Oso, near Darrington, Washington March 27, 2014.
REUTERS/Ted S. Warren/Pool

END_OF_DOCUMENT_TOKEN_TO_BE_REPLACED 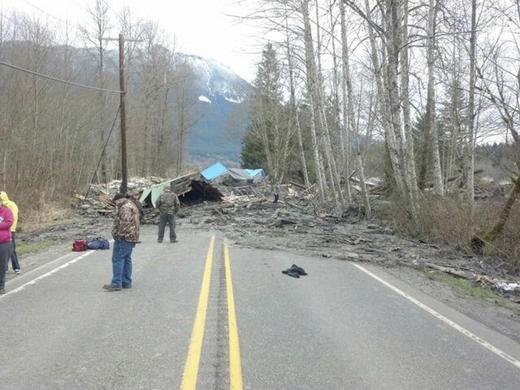 END_OF_DOCUMENT_TOKEN_TO_BE_REPLACED

At least one person is dead in Manitou Springs, Colo., after a mudslide and flash flooding Friday night caused massive damage in an area burned by the Waldo Canyon wildfire last year.

The El Paso County Sheriff’s Office confirmed a man’s body was found in flash flooding debris along U.S. 24 on Friday, KUSA reported. The body was not found inside a vehicle, and the identity of the victim is not yet known as no form of identification was with the body.

At least three others were injured as violent floodwaters swept through much of the town, lifting homes from their foundations, littering the streets with debris and pushing vehicles off the highway, The Gazette reported.

The mudslide closed U.S. 24 between Cascade and Manitou Springs, located west of Colorado Springs. The highway has been partially reopened. Flooding also closed part of U.S. 50.

“We always have to keep it in the back of our minds, but I didn’t think it would happen tonight,” said Hokenstad, who spent the evening with employees mopping mud from the game room floors and pumping water from flooded basements.

Michael Cercone told the Gazette that he saw a home get swept away in the flood waters.

“I never expected like a home to wash down the street, not at all,” Cercone said.

At least five people are killed by floods and mudslides.

Local broadcaster TBS showed widespread flooding in the town of Yahaba, in Iwate prefecture, and residents wading through waterlogged streets on Saturday.

No injuries or deaths have been reported in the area, though town officials said about 300 residents were evacuated on Friday and that about 130 remained at evacuation centres.

However, in the city of Senboku, in Akita prefecture, local officials said three people were found dead after a mudslide crushed two houses.

A team of almost 280 police officers, firefighters and self-defence forces were searching for two people who remained missing.

Officials also said that one person died following a mudslide in the city of Hanamaki, and that another was found dead in a river in the town of Nishiwaga.