Crime scene tape marks the home on Jim Platt Road near Citronelle, Ala., Sunday, Aug. 21, 2016, where authorities said five people were killed on Saturday. Police said that Derrick Dearman, 27, of Leakesville, Miss., has been taken into custody in connection with the murders. (John Sharp/AL.com via AP)

END_OF_DOCUMENT_TOKEN_TO_BE_REPLACED

A member of the Iraqi interior ministry’s anti-terrorism forces stands guard outside the Habaniyah military base, near Anbar province’s capital Ramadi, on May 8, 2015 (AFP Photo/Ahmad al-Rubaye)

END_OF_DOCUMENT_TOKEN_TO_BE_REPLACED

Militants have killed at least 20 people, said to be mostly women and children, in the second massacre in two days near the DR Congo town of Beni

END_OF_DOCUMENT_TOKEN_TO_BE_REPLACED 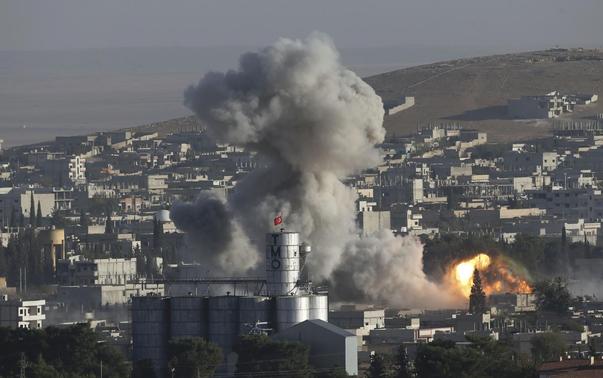 END_OF_DOCUMENT_TOKEN_TO_BE_REPLACED

The UN has called for action to prevent what it says may be a possible massacre in the northern Iraqi town of Amerli.

END_OF_DOCUMENT_TOKEN_TO_BE_REPLACED

Syrian army soldiers, seen in the background, standing in front of dead bodies at Bayda village, in the mountains outside the coastal city of Banias, Syria (photo credit: AP Photo/The Syrian Revolution against Bashar Assad)

The Britain-based Syrian Observatory for Human Rights says around 4,000 Sunnis were leaving the city of Banias early Saturday.

The exodus comes two days after government forces and gunmen from President Bashar Assad’s Alawite sect allegedly killed more than 50 people in the Sunni village of Bayda outside of Banias.

Observatory directory Rami Abdul-Rahman says that carnage, coupled with house-to-house raids overnight in a Sunni neighborhood in Banias, prompted many Sunni families to flee the area.

Syria’s mountainous coastal region is the Alawite heartland, although it is also dotted with Sunni villages.

More than 100 civilians have been killed in a new massacre north of the Syrian city of Homs, activists say.

More than 100 civilians have been killed in a new “massacre” in Syria, a watchdog said Thursday, according to AFP.

The Syrian Observatory for Human Rights said the deaths came on Tuesday, when the army swept through farmlands north of Homs city, where it said around 1,000 people had sought refuge from fighting in the central Syria metropolis.

“The Syrian regime carried out a new massacre on Tuesday claiming 106 victims, including women and children,” the Britain-based watchdog, which relies on a network of activists and medics on the ground, told AFP.

Homs, dubbed “the capital of the revolution” by Syria’s opposition, is the most strategic city in the country’s largest province, lying on key trade routes near the borders with Lebanon and Iraq, and with its southwestern areas not far from Damascus.

“They came in and slaughtered the women and the children. They burned their bodies,” an unidentified woman told an anti-regime activist, according to amateur video distributed by Homs-based opponents of the regime.

The Observatory urged the UN to send a fact-finding team to probe the latest bloodshed.

The reported deaths were the latest to emerge from Syria, where twin blasts on Tuesday tore through an Aleppo campus while students were sitting exams.

At least 87 people were killed in one of the bloodiest attacks of the 22-month conflict, in a city that has suffered some $2.5 billion in damage in six months of bitter conflict, according to Aleppo’s governor.

No one claimed responsibility for the Aleppo blasts, but the United States blamed government forces for the violence, suggesting they were caused by air strikes on university buildings.

“I cannot imagine anything more blasphemous,” said Moscow’s Foreign Minister Sergei Lavrov said on Thursday, according to AFP. He described the killings as a “terrorist act.”

In another incident on Wednesday, twin car bombs killed at least 22 people in the city of Idlib.

The bombings had the hallmarks of operations staged by the jihadist Al-Nusra Front, a rebel group which has a strong presence on the ground in northwestern Syria and is blacklisted by the United States as a “terrorist” organization.

Al-Nusra is an affiliate of Al Qaeda, believing in the hope of reviving the Islamic Caliphate that will build a Muslim Empire to eventually rule the world.

The group is one of 13 factions in the radical Islamist rebel council that announced its secession from the main opposition force several weeks ago.

Meanwhile, AFP reported, violence erupted again in Syria on Thursday, with the Observatory reporting several air strikes on flashpoints in Damascus province and Kafr Nabuda in the central province of Hama.

In the Husseiniyeh area near the capital, warplanes dropped three missiles killing 11 civilians, among them seven children, said the Observatory.

An air strike on Kafr Nabuda killed another four children, the monitoring group said, adding that more than 3,500 children have been killed in Syria’s conflict.

The Observatory gave a death toll for Thursday of 127 killed — 68 civilians, 34 rebels and 25 soldiers.

More than 60,000 people, mostly civilians, have been killed in Syria’s conflict, according to the United Nations.

When 28 people, including 20 school children, died today in a shooting at an elementary school in Newtown, Conn., the commentators launched into discussions of mental illness and depression and speculation about a dozen other factors that may have influenced the attacker, identified as Adam Lanza, 20.

“Most mass killers have suffered some kind of chronic depression and frustration,” Jack Levin, a Northeastern University professor of sociology and criminology, told NPR. “They externalize responsibility, blaming everybody but themselves for their failings.