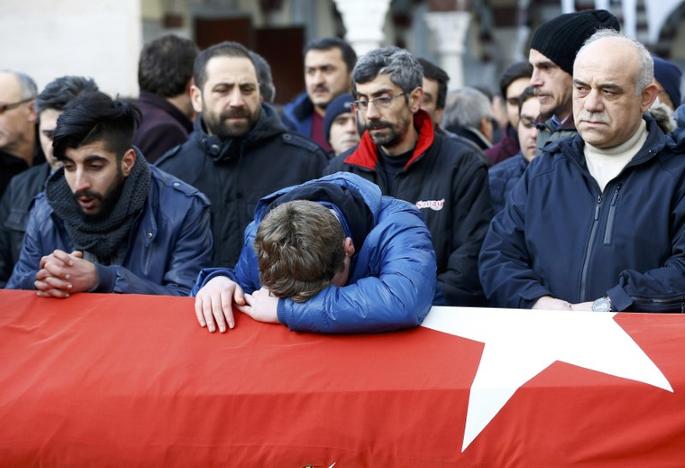 Relatives react at the funeral of Ayhan Arik, a victim of an attack by a gunman at Reina nightclub, in Istanbul, Turkey, January 1, 2017. REUTERS/Osman Orsal

END_OF_DOCUMENT_TOKEN_TO_BE_REPLACED

Caskets of a bomb victim during a memorial in Istanbul, Sunday, Dec. 11, 2016, for police officers killed outside the Besiktas football club stadium Vodafone Arena late Saturday. Family members, Turkey’s President Recep Tayyip Erdogan, ministers and colleagues attended the memorial as Turkey declared a national day of mourning Sunday after twin blasts in Istanbul killed dozens of people and wounded many others near a soccer stadium. Turkish authorities have banned distribution of images relating to the Istanbul explosions within Turkey. (AP Photo/Emrah Gurel)

END_OF_DOCUMENT_TOKEN_TO_BE_REPLACED

The daughter (center) of Siddik Turgan, who died in the June 28, 2016 Ataturk airport attack that killed 41 people, reacts as her father’s coffin is carried nearby during his funeral ceremony on June 29, 2016 in Istanbul. (AFP PHOTO/BULENT KILIC)

At least 13 foreigners among those killed in triple suicide bombings at Ataturk airport; 239 hurt, with 130 still hospitalized

END_OF_DOCUMENT_TOKEN_TO_BE_REPLACED

Scene outside the Karokos apartment building in Istanbul, Turkey, where the couple was found stabbed to death, August 22, 2014. (Screenshot from Hurriyet TV/DHA)

END_OF_DOCUMENT_TOKEN_TO_BE_REPLACED

Dissident groups call for demonstrations after death of 22-year-old man in clashes with police in country’s southeast.

Tensions remain high in Hatay, a province of mixed ethnicities and religions that borders Syria [EPA]

Anti-government protesters in Turkey have called for mass demonstrations after a Turkish protester died in a protest in the southeastern province of Hatay.

Ahmet Atakan, 22, died on Tuesday in a protest organised to show solidarity with students opposed to the construction of a road through a university in Ankara, the capital, but the cause of his death was in dispute.

Taksim Solidarity Platform, an umbrella group of Turkish dissidents, called for a gathering in Istanbul’s Taksim Square to mark the death of Atakan.

END_OF_DOCUMENT_TOKEN_TO_BE_REPLACED

Police blocked several hundred protesters in a busy street near Istanbul’s Taksim Square from marching in support of a teenage boy who is said to be in a coma after being hit in the head by a teargas canister during the unrest.

What started as a small protest against the planned redevelopment of the city’s Gezi Park triggered nationwide protests last month against Prime Minister Tayyip Erdogan, accused by his critics of becoming increasingly authoritarian.

Five people died and thousands were injured in the anti-government unrest, which posed the biggest challenge to Erdogan’s decade-old rule.

While the protests have largely died down across the country, some isolated demonstrations have persisted in Istanbul and the capital, Ankara.

(Reuters) – A lone, silent vigil by a man in Istanbul inspired copycat protests on Tuesday, as police detained dozens of people across Turkey in an operation linked to three weeks of often violent demonstrations against Prime Minister Tayyip Erdogan.

Overnight in Ankara, riot police used tear gas and water cannon to disperse hundreds of protesters who had gathered in and around the government quarter of Kizilay.

But in stark contrast to the recent fierce clashes in several cities, dozens of protesters merely stood in silence in Istanbul, Ankara and Izmir, inspired by a man who lit up social media by doing just that for eight hours in Istanbul’s Taksim Square on Monday.

END_OF_DOCUMENT_TOKEN_TO_BE_REPLACED

“Our patience is at an end. I am making my warning for the last time,” he said.

Clashes between police and protesters in the park and adjoining Taksim Square have continued for nearly two weeks.

Activists have said they will not leave until the government abandons plans to redevelop the park. Mr Erdogan’s party has proposed a referendum on the issue.

END_OF_DOCUMENT_TOKEN_TO_BE_REPLACED

A protester throws a teargas canister back at riot police amid a violent struggle for control of Taksim Square in central Istanbul. Photograph: Murad Sezer/Reuters

As the police moved in on the nerve centre of the nationwide uprising, dozens of lawyers were dragged away from the city’s central courthouse in what appeared to be a flagrant abuse of human rights.

END_OF_DOCUMENT_TOKEN_TO_BE_REPLACED

A man runs as riot police use tear gas and pressurized water to quash a sit-in protest to try and prevent the demolition of trees at an Istanbul park, Turkey, Friday, May 31, 2013. Police moved in at dawn Friday to disperse the crowd on the fourth day of the protest against a contentious government plan to revamp Istanbul’s main square, Taksim. (AP Photo)

ISTANBUL — Turkish riot police used tear gas and water cannons Friday to end a peaceful sit-in by hundreds of people trying to prevent trees from being uprooted in an Istanbul park. The dawn raid ignited a furious anti-government protest that took over the city’s main square and spread to other cities, culminating in what Turkish Facebook users described as a “massacre” which unfolded amid clouds of tear gas.