To deflect blame for GE wheat contamination of commercial crops

(NaturalNews) There is a grand conspiracy theory at work to destroy the value of U.S. wheat crops, Monsanto recently told mainstream media reporters in a telephone conference. The contaminated GE wheat recently discovered in Oregon didn’t get there by escaping Monsanto’s open-air GMO experiments, the company claims. Instead, they say it might have been put there by a conspiracy of crop criminals who somehow acquired GE wheat from Monsanto’s field trials way back in 2005, then somehow saved it in a way that kept it genetically viable for eight years, then supposedly drove around Oregon for the sole purpose of releasing the GMOs in some farmer’s field that they just hoped the USDA might be someday be testing for GMO contamination.

END_OF_DOCUMENT_TOKEN_TO_BE_REPLACED 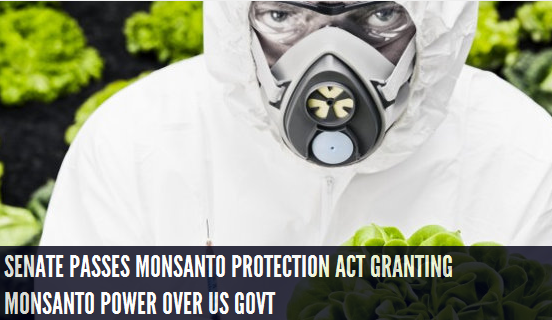 In the typical slippery nature of Monsanto’s legislation-based actions, the biotech giant is now virtually guaranteed the ability to recklessly plant experimental GM crops without having to worry about the United States government and its subsequent courts. The Monsanto Protection Act buried deep within the budget resolution has passed the Senate, and now nothing short of a presidential veto will put an end to the ruling.

In case you’re not familiar, the Monsanto Protection Act is the name given to what’s known as a legislative rider that was inserted into the Senate Continuing Resolution spending bill. Using the deceptive title of Farmer Assurance Provision, Sec. 735 of this bill actually grants Monsanto the immunity from federal courts pending the review of any GM crop that is thought to be dangerous. Under the section, courts would be helpless to stop Monsanto from continuing to plant GM crops that are thought even by the US government to be a danger to health or the environment.

Senate Passes Monsanto Protection Act Despite Outcry
It is a lobbyist-created recurring nuisance that has been squashed in previous legislation thanks to outcry from not only grassroots but major organizations. Last time we saw The Center for Food Safety, the National Family Farm Coalition, the American Civil Liberties Union (ACLU), the Sierra Club, and the Union of Concerned Scientists all come out against the Monsanto Protection Act from the 2012 Farm Bill.

This time, there was a swift resistance I thought might be enough, however sadly the Senate acted so quickly on this and almost entirely ignored the issue that it has now passed despite thousands of fans signing the old petition I linked to in my previous articles on the subject. The old petition by Food Democracy Now detailed the effects of the bill:

“If approved, the Monsanto Protection Act would force the USDA to allow continued planting of any GMO crop under court review, essentially giving backdoor approval for any new genetically engineered crops that could be potentially harmful to human health or the environment.”

That said, now a new petition exists telling Obama to veto the bill. The reality is that the bill is actually seen as a positive one by most politicians, which is where Monsanto lobbyists were so deceptive and slippery as to throw in their rider (the actual Monsanto Protection Act into the bill). This makes it very unappealing to veto the bill, but also we must remember that Obama actually promised to immediately label GMOs back in 2007 when running for President.

In case you don’t believe me, here’s the video:

Ushering In a New Era of Activism
The simple fact is that this bill will likely not be vetoed by Obama, and instead Monsanto will get what they wanted. That said, this ushers in an entirely new era of activism. Monsanto has decided to push the envelope in a way that is unprecedented, fighting the US federal courts. I expected to see almost immediate legal action taken that will certainly hit the headlines, leading to even more people to become aware of what’s really going on with this company and therefore their dinner.

Sometimes in order to truly have an intellectual revolution on a subject, the people need to see exactly what they are facing. With the truly blatant and downright arrogant Monsanto Protection Act, it’s now clearer than ever.