Agency now has the resources to potentially arm airport screeners

END_OF_DOCUMENT_TOKEN_TO_BE_REPLACED

State police in Maryland report a record number of firearms applications ahead of the implementation of a draconian anti-Second Amendment bill on October 1.

As of Friday, the police have received over 100,000 applications. The cops say they will not enforce the new requirements on applicants submitting prior to law going into effect next month.

The law signed by Maryland’s Democrat governor and former Baltimore mayor, Martin O’Malley, bans a large number of firearms the government has classified as “assault weapons,” imposes a ten round restriction on magazines, and forces handgun buyers to hand over their fingerprints to the state.

END_OF_DOCUMENT_TOKEN_TO_BE_REPLACED

Last week, an Indianapolis woman was able to defend herself and her property by having a firearm at her disposal when she needed it most.

“Kari Bird just started law school and continues to work full time,” reported Indiana’s Fox 59. “Bird got home at 11:30 p.m. Wednesday and when she got out of her car, a group of three or four young guys approached her.”

Bird says one of the men smiled before pulling a gun on her, then demanded her keys.

As she turned over her keys, she realized her costly possessions were about to be forfeited. It was then, Bird says, she remembered the firearm stored in her car’s center console.

Bird says she grabbed her gun and pointed it at them.

Police are asking for the public’s help in identifying the roving band of teen miscreants. “The one who pulled the gun is described as husky, wearing a black hoody over a light shirt,” Fox 59 reported.

As noted in a report sponsored by the Justice Department, about 40 percent of criminals say they had “decided not to do a crime because they knew or believed that their intended victim was armed.”

Bird’s tale has earned her a place on the website GunsSaveLives.net’s Stories of Self Defense map which pinpoints areas in the United States where crimes have been thwarted by responsible gun owners. The map depicts hundreds of instances in the United States in which guns were used to defend one’s life or property.

Guns Save Lives.net’s Stories of Self Defense map.

The Transportation Security Administration’s plan to hire the use of a firing range within a 20 mile radius of LaGuardia Airport in order to train TSA workers has prompted concerns that the federal agency is planning to arm its agents as part of a massive expansion.

A solicitation posted to the FedBizOpps website yesterday details Homeland Security’s “requirement for a firearms range to conduct mandatory quarterly qualifications and other firearms training.”

The proposed indoor range must have 10-15 firing points and be available for block booking over time periods of 5-8 hours. It must also include, “a separate entrance/exit which will permit DHS personnel to enter/exit to the aforementioned 15 point area without interacting with the general public.”

DHS personnel will use the facility for 25 days out of every quarter and almost half a million rounds will be fired per year. A separate briefing rooms for students is also requested. Range rules must “allow shooters to draw and fire from the holster and from concealment” as well as permitting “tactical move and shoot drills”.

The deal to hire a facility is scheduled to be in place by September 1, 2013.

END_OF_DOCUMENT_TOKEN_TO_BE_REPLACED

The video by MB Studio Productions depicts a startling but believable scenario in which armed thieves target a house when the family is at home. The family calls 9-1-1 and the father quickly retrieves his pistol from a gun safe. But after fending off the first armed intruder, the father stands horrified after pulling the trigger on a gun now empty of bullets as the second intruder enters the home.

The dramatization’s final scene is tragic, and the video concludes with the words, “Because your government decided how many rounds you need to protect your family.”

Since the Newtown school massacre governments of all levels have attempted to limit the size of firearm magazines, effectively restricting the number of bullets a gun can hold at a given time. Oak Park, Ill., for example, bans possession of a magazine holding more than 10 rounds, and the state of New York goes even further, restricting gun owners to only seven rounds of ammunition unless using the weapon at a firing range.

Brian Lockerman, owner of MB Studio Productions, however, explains at the beginning of the video that the dramatized public service announcement will be only the first of many to illustrate “who these laws really effect and why they don’t work.”

“I am passionate about protecting our Second Amendment rights because I know this is the right that protects all other rights,” Lockerman states on an MB website. “I am not going to tell you that you have to own a gun. It’s not for everyone. But the push to take away the individual freedom and Second Amendment right to keep and bear arms is rooted in fear and misunderstanding.”

He continues: “Your constitutional rights are threatened because anti-gun people seem to defy all reason and sanity with their beliefs and fears. Most of them have been taught literally zero about guns, have never held one in their hands and are terrified by the thought of them. We can’t approach this perception problem by simply telling our pro-self-protection, pro-gun side of the story.”

To that end, MB Studio Productions is planning further videos as well as a reality-based TV show emphasizing his message, called “Shoot to Thrill.”

The MB Studio Productions video can be seen below. (Editor’s note: The following video contains violence and two instances of obscene language some viewers may find offensive):

Late last week, a Pennsylvania-based gun store had its Facebook page suddenly deactivated after administrators at the social media giant reportedly learned the shop’s proprietor was using the store’s Facebook presence as a way to raffle off semiautomatic firearms.

In talking with The Blaze.com, Erik Lowry, who owns Pittsburgh Tactical Firearms in McKeesport, Pennsylvania, explained the situation, although even he is a little unclear about why exactly his store’s fan page, which had over 27,000 friends, was shut down.

On Sunday, he had plans to run a huge giveaway that would have included an AR-15 as the main prize, but close to the eve of the giveaway he awoke to calls and emails from concerned customers wondering what happen to PTF’s Facebook page. 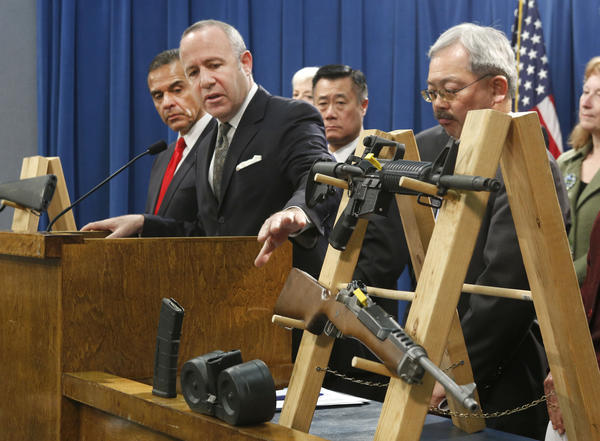 The California Senate approved a $24-million expenditure on Thursday to speed the confiscation of guns from people who have been disqualified from owning firearms because of criminal convictions or serious mental illness.

Sen. Mark Leno (D-San Francisco) said budget cuts to the Department of Justice have hampered a program that targets people who purchased firearms legally but were later disqualified because of a subsequent conviction or determination of mental illness.

As a result of the cuts, there is a backlog of 19,000 people who have improper possession of more than 40,000 guns, including 1,600 assault weapons, and the number is increasing faster than their firearms can be confiscated.