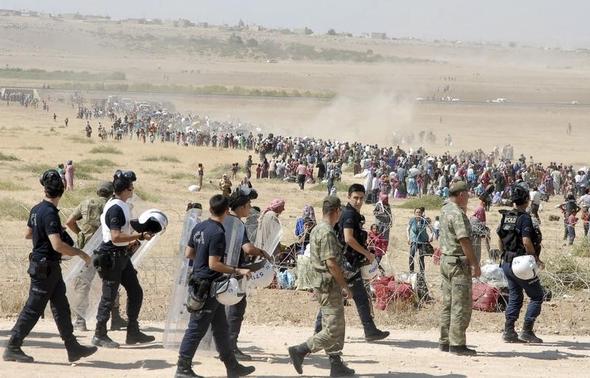 Turkish policemen and soldiers walk as Syrian Kurds wait behind the border fence to cross into Turkey near the southeastern town of Suruc in Sanliurfa province, September 19, 2014. REUTERS-Stringer

END_OF_DOCUMENT_TOKEN_TO_BE_REPLACED

FILE VOA News- A member of a heavily armed militia group is seen in Benghazi.

END_OF_DOCUMENT_TOKEN_TO_BE_REPLACED

Smoking: Passengers are rescued from the roof of a smoking London Duck Tours amphibious vehicle by a speedboat on the River Thames, close to Westminster

Duck Boat passengers jump into the Thames after amphibious craft sets on fire and starts sinking near the Houses of Parliament.

Clambering to the back of the boat, passengers frantically try to escape the billowing black smoke threatening to engulf them.Tourists including children as young as six are forced to jump overboard as flames erupt and quickly spread.

This is the moment a trip along the Thames came to a sudden and terrifying end yesterday.

A London Duck Tours boat caught fire opposite the Houses of Parliament just before midday, leaving those on board with no option but to evacuate.

Many leapt into the water, while others clung to the edge of the sinking vessel. Rescue workers and crews on passing tour barges helped haul 30 people to safety.

END_OF_DOCUMENT_TOKEN_TO_BE_REPLACED

BOULDER, Colo. (AP) — As rescuers broke through to flood-ravaged Colorado towns, they issued a stern warning Saturday to anyone thinking of staying behind: Leave now or be prepared to endure weeks without electricity, running water and basic supplies.

National Guard helicopters and truck convoys carried the admonition into paralyzed canyon communities where thousands of stranded residents were eager to escape the Rocky Mountain foothills. But not everybody was willing to go. Dozens of people in the isolated community of Jamestown wanted to stay to watch over their homes.

Authorities made clear that residents who chose not to leave might not get another chance for a while. Rescuers won’t go back for people who insist on staying, Boulder County Sheriff Joe Pelle said.

END_OF_DOCUMENT_TOKEN_TO_BE_REPLACED

Turkish citizens urged to avoid travel to Lebanon and those already in the country advised to leave if they can.

Turkey has called on its citizens to leave Lebanon following abduction of two Turkish Airlines pilots by armed men in Beirut.

Separately, it has decided to remove its troops from the UNIFIL peacekeeping forces operating in southern Lebanon, according to Lebanese media.

Two Turkish pilots working for Turkish Airlines were kidnapped by armed men who intercepted their bus early on Friday morning.

“Given the current situation it is vital that our citizens avoid all travel to Lebanon,” a foreign ministry online statement said on Saturday.

“We suggest that citizens who are still in Lebanon return to Turkey if they can, or if they have to remain, to take all measures to ensure their personal safety and be vigilant,” the statement added.

END_OF_DOCUMENT_TOKEN_TO_BE_REPLACED

http://www.debka.com –  The Israeli IDF has dropped leaflets over Gaza City Tuesday informing them to evacuate the city immediately.  Palestinian rocket fire has intensified today and has targeted new locations.  Two of the missiles aimed at Jerusalem landed in a Palestinian village on the West Bank.  Several Israeli schools took direct hits from the rockets, however there were no children present as they were being kept home from school for the past week.