FILE- In this Nov. 5, 2014, file photo, on the outskirts of the city of Monrovia, Liberia, a health worker stands inside a medical tent that forms part of a new American clinic to be used for the treatment of people suffering from the Ebola virus. U.S. officials on Thursday, Nov. 20, acknowledged disagreements over coordinating the international response to the Ebola epidemic in Liberia. (AP Photo/Abbas Dulleh, File)

END_OF_DOCUMENT_TOKEN_TO_BE_REPLACED

Pinal County Sheriff Paul Babeau speaks to the media as protesters gather near the entrance to juvenile facility in an effort to stop a bus load of Central American immigrant children from being delivered to the facility, Tuesday, July 15, 2014, in Oracle, Ariz. Federal officials delayed the bus with no details on whether the children will arrive or not. (AP Photo/Brian Skoloff)

END_OF_DOCUMENT_TOKEN_TO_BE_REPLACED

This healthy baby girl, Amelia Sloan, became a pioneer for gene mapping shortly after her birth.

Amelia is part of a large research project outside the U.S. capital that is decoding the DNA of hundreds of infants.

New parents in a few other cities soon can start signing up for smaller studies to explore what’s called genome sequencing – fully mapping someone’s genes to look for health risks and should become a part of newborn care.

Scroll down for video

Baby Amelia: Holly Sloan interacts with her baby Amelia at their home in Warrenton, Virginia (Amelia is part of a large genetic project in the U.S)

However, it’s full of ethical challenges.

Should parents be told only about childhood threats? Or would they also want to learn if their babies carried a key gene for, say, breast cancer after they’re grown?

Could knowing about future risks alter how a family treats an otherwise healthy youngster? And how accurate is this technology. Could it raise too many false alarms?

END_OF_DOCUMENT_TOKEN_TO_BE_REPLACED 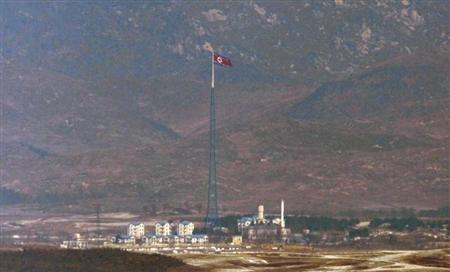 (Reuters) – North Korea threatened South Korea with “final destruction” during a debate at the U.N Conference on Disarmament on Tuesday, saying it could take “second and third steps” after a nuclear test last week.

“As the saying goes, a new-born puppy knows no fear of a tiger. South Korea’s erratic behavior would only herald its final destruction,” North Korean diplomat Jon Yong Ryong told the meeting.

Without specifically referring to the nuclear test, Jon said North Korea had recently taken a “resolute step for self-defence”, which he described as “strong counter-actions to a foreign aggressor”.

“If the U.S. takes a hostile approach toward the DPRK to the last, rendering the situation complicated, it (North Korea) will be left with no option but to take the second and third stronger steps in succession,” he added, without elaborating.

His comments drew immediate criticism from other nations, including South Korea and Britain, whose ambassador Joanne Adamson said such language was “completely inappropriate” and the discussion with North Korea was heading in the wrong direction.

“It cannot be allowed that we have expressions which refer to the possible destruction of U.N. member states,” she said.

“I also was particularly struck by the phrase ‘heralding the destruction of the Republic of Korea’ and find that language incredibly inconsistent with the goals and objectives that this body is intended to pursue,” she said.