Masked Hamas members carry a model of a rocket during a rally in the Central Gaza Strip on December 12, 2014. (Photo credit: Abed Rahim Khatib / Flash90)

END_OF_DOCUMENT_TOKEN_TO_BE_REPLACED 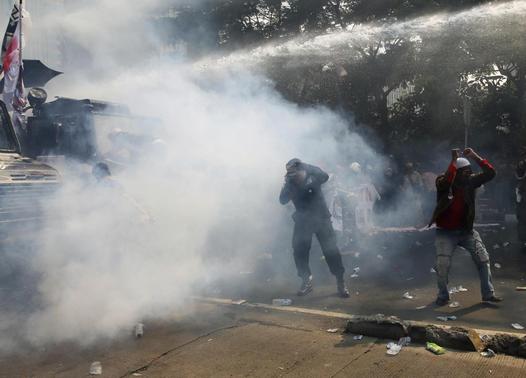 Presidential candidate Prabowo Subianto’s supporters try to shield themselves as police fire tear gas during a protest near the Constitutional Court in Jakarta August 21, 2014. REUTERS-Beawiharta

END_OF_DOCUMENT_TOKEN_TO_BE_REPLACED

This photo provided by the South Central Regional Jail in Charleston W.Va., shows Peter Lizon from Leroy W. Va. Authorities say Lizon tortured and enslaved his wife for much of the past decade, forcing her to endure two pregnancies and deliveries in shackles. Lizon was in jail Wednesday, July 11, 2012, on $300,000 bond. He was scheduled for a preliminary hearing on a malicious wounding charge Friday morning in Jackson County Magistrate Court. (AP Photo/South Central Regional Jail)

RIPLEY, W.Va. (AP) — The wife of a West Virginia man accused of torturing and abusing her for years denied the allegations Friday, testifying that all of her burns and bruises were accidents.

Stephanie Lizon denied that her husband, Peter Lizon, bound her with chains, and when she was shown photos of her injuries, she gave short explanations and said her husband did not intentionally hurt her.

“It was an accident. My husband and I were arguing. We collided with each other,” she testified when shown pictures of back wounds allegedly from a frying pan.

“It is plain to a reasonable person that this was intentional,” Casto said. “It’s not an accident.”

END_OF_DOCUMENT_TOKEN_TO_BE_REPLACED

Long before he started idolizing Adolf Hitler, Heath Campbell was a wife-beating tyrant who was obsessed with the devil, the Daily News has learned.

An ex-wife of Campbell, who marched into a New Jersey courthouse last week in full Nazi regalia, says he was a hubby from hell.

“He claimed that his mother was raped and he was the evil seed planted inside her,” Cathy Bowlby told The News. “He believed he was the devil reborn to take over the world.”

END_OF_DOCUMENT_TOKEN_TO_BE_REPLACED

Art history experts are expressing alarm at a court ruling in Turkey that the 13th century Church of Hagia Sophia – which has been a museum and contains irreplaceable examples of its time period – must be converted to a mosque.

The situation has been detailed by the art experts at The Art Newspaper.

There, Andrew Finkel wrote that the famous structure in Trabzon, a city along the Black Sea, will be converted to a mosque following an extended battle over its use.

Finkel is alarmed, however, because “many in Turkey believe that the Church of Hagia Sophia is a stalking horse for the possible re-conversion of its more famous namesake in Istanbul, the Hagia Sophia Museum.”

“A building covenanted as a mosque cannot be used for any other purpose,” Mazhar Yildirimham, of the General Directorate of Pious Foundations, said in the report. The organization made the claim that the structure is “an inalienable part of the foundation of Sultan Mehmed II,” who reportedly originally took over the church building and turned it into a mosque in 1462.

Yildirimham said in the report regarding the walls that are covered with Christian art, “There are modern techniques for masking the walls.”

The structure for the last 50 years has been run by Turkey’s Ministry of Culture and Tourism. It also had been used as an arsenal and a cholera hospital in the mid 1900s.

It was rescued from dereliction, the report said, by experts from the University of Edinburgh who restored the original ground plan.

The Art Newspaper said Antony Eastmond, of England’s Courtauld Institute of Art, and an authority of the building, said, “This is the most complete surviving Byzantine structure; there is no 13th century monument like it.”

It’s not the only structure undergoing a remake, the report said.

“In January, Istanbul’s oldest surviving church, the fifth-century St. John Stoudios, which became the Imrahor Mosque in the 15th century before fire and earthquake left it in ruins, was transferred from the Ministry of Culture and Tourism to the General Directorate, which plans to rebuild it as a mosque.”

“Recent experience suggests that the directorate reconstructs mosques without regard for the millennia of history they contain,” the art report said.

At Jihad Watch, Islam expert Robert Spencer noted, “Islamic supremacists regard the pre-Islamic past of any Muslim country as worthless trash … not to be preserved for its archaeological value, but effaced as an insult to Islam.

“This is the same impulse that led to the destruction of the Bamiyan Buddhas in Afghanistan,” he wrote.

Amnesty International: ‘Remove these terrible punishments from the law’

(Reuters) Amnesty International has condemned a reported Saudi Arabian court ruling that a young man should be paralyzed as punishment for a crime he committed 10 years ago which resulted in the victim being confined to a wheelchair.

The London-based human rights group said Ali al-Khawaher, 24, was reported to have spent 10 years in jail waiting to be paralyzed surgically unless his family pays one million Saudi riyals ($270,000) to the victim.

The Saudi Gazette newspaper reported last week that Khawaher had stabbed a childhood friend in the spine during a dispute a decade ago, paralyzing him from the waist down.