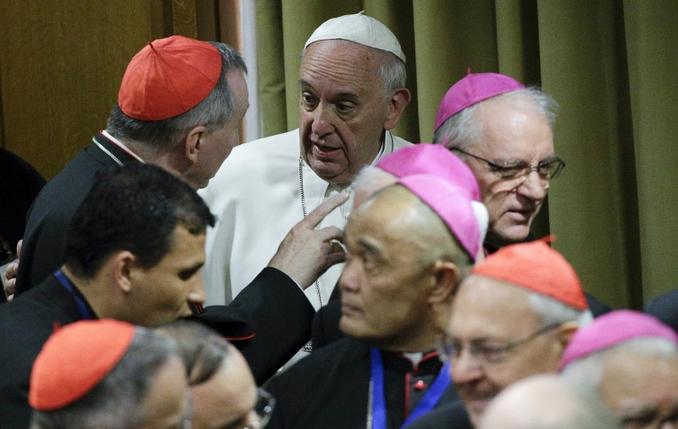 Pope Francis talks with cardinals as he leads the synod on the family in the Synod hall at the Vatican, October 5, 2015. Reuters/Max Rossi

END_OF_DOCUMENT_TOKEN_TO_BE_REPLACED 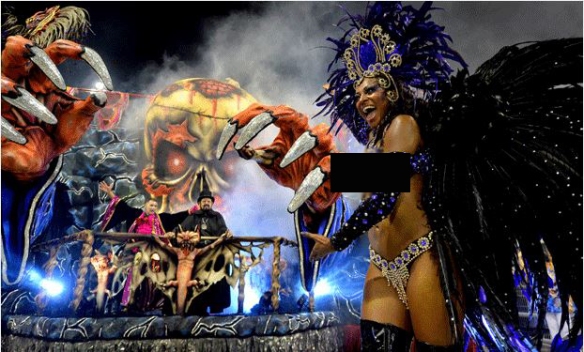 Being bad, never looked this good: A dancer from the Rosas de Ouro samba school performs in front of a demonic themed float at the carnival parade. Brazil 2014.

Evil, demonic float at Carnival in Brazil, including scantlily clad females…is this a Christian ritual?

END_OF_DOCUMENT_TOKEN_TO_BE_REPLACED

Pope Francis celebrates a Mass for newly-elected cardinals, in St. Peter’s Basilica at the Vatican, Sunday, Feb. 15, 2015. Pope Francis welcomed 20 new cardinals Saturday into the elite club of churchmen who will elect his successor and immediately delivered a tough-love message to them, telling them to put aside their pride, jealousy and self-interests and instead exercise perfect charity. (AP Photo/Andrew Medichini)

END_OF_DOCUMENT_TOKEN_TO_BE_REPLACED

Pope Francis waves to journalists as he stands by Istanbul’s Grand Mufti Rahmi Yaran upon their arrival to the Blue Mosque in Istanbul on Saturday.

END_OF_DOCUMENT_TOKEN_TO_BE_REPLACED

Pope Francis (pictured yesterday at the Vatican) spoke of the failings of opposing wings of the Church following the end of the Rome synod on family life which left supporters of gay rights and divorcees disappointed.

END_OF_DOCUMENT_TOKEN_TO_BE_REPLACED

The Holy Bible is filled with prophecies about the “end of the world.”

There are famous apocalyptic sections such as the 24th chapter of the Gospel of Matthew, much of the Books of Isaiah and Daniel and virtually all of the Book of Revelation.

And for countless years, many people have been wrong in predicting when specifically the events will actually take place.

Now, some Christians are looking with renewed interest at a forecast from outside the Word of God that could reveal the imminent return of Jesus to Earth and His personal administration of the kingdom of God.

The prediction comes from Malachy, a 12th century Catholic saint from Ireland, who made a list of what are thought to be the names of popes from his time until Christ’s so-called “Second Coming.”

According to Malachy’s prophecy, the time of the final pope is right now, being fulfilled in the person of Pope Francis, who just ascended to the papacy this year.

END_OF_DOCUMENT_TOKEN_TO_BE_REPLACED

The controversial Planned Parenthood lobbyist who put the Florida chapter of the nation’s largest abortion business on record supporting infanticide was once a member of the board of directors for a local Catholic Charities branch.

As LifeNews initially reported, Alisa Lapolt Snow defended the practice of allowing babies not killed in an abortion to be allowed to die afterwards. She said the decision on whether to provide such children with medical care is between the mother having the abortion and the abortion practitioner.

Now, a report on the Creative Minority Report blog indicates Snow was once a member of the board of a Catholic group that, ironically, in part helps provide abortion alternatives for women.

Alisa is a graduate of the University of Tennessee where she earned a bachelor’s degree in communications/journalism. She was a founding member and secretary of the Sunset Rotary Club of Tallahassee and serves on the board of Catholic Charities of Northwest Florida-Tallahassee. She is a member of the Florida Association of Professional Lobbyists.

Because I don’t take the word of people from Planned Parenthood on anything, I checked the website and she was not listed on their board of directors.

So I called the Catholic Charities office and they told me that Lapolt-Snow did indeed serve on the board until leaving in January. She didn’t explain further.

How horrifying is that? A lobbyist for Planned Parenthood was a board member for a Catholic Charities office. I can’t believe that it’s not clear to everyone that you cannot advocate for the killing of babies and be a Catholic. Just can’t.

Snow was opposing a bill in the state legislature that would provide medical care and legal protection for babies who are born alive after failed abortions.

This is the same legislation President Barack Obama refused to support during his time in the Illinois legislature and it mirrors a national law President George W. Bush signed after nurse Jill Stanek exposed how her Chicago-area hospital left babies to die in utility closets after botched abortions.

During the same hearing, a Florida legislator noted how more than 1,200 babies died following a failed abortion and their whose deaths were reported as “mortality subsequent to an abortion.” As the representative emphasized, those are only the number of reported deaths following botched abortions, and the actual figures could be higher.