This picture released by the Iranian state-run IRIB News Agency on Wednesday, Jan. 13, 2016, shows detention of American Navy sailors by the Iranian Revolutionary Guards in the Persian Gulf, Iran.(Sepahnews via AP)

From the left to the right, Hebrew newspapers seem to relish the schadenfreude of the 10 American sailors captured then released by Iran

END_OF_DOCUMENT_TOKEN_TO_BE_REPLACED

This Aug. 15, 2014 photo released by Colombia’s Army press office shows Colombian Army Gen. Ruben Dario Alzate in Colombia. Colombian President Juan Manuel Santos suspended peace talks with the South American nation’s largest rebel group after Alzate was taken captive on Sunday, Nov. 16, 2014. The U.S.-education soldier and two others were intercepted while traveling by motor boat along a remote river in western Colombia. A fourth soldier managed to flee and reported that the captors were members of the 34th front of the Revolutionary Armed Forces of Colombia, or FARC. (AP Photo/Colombian Army press office)

END_OF_DOCUMENT_TOKEN_TO_BE_REPLACED 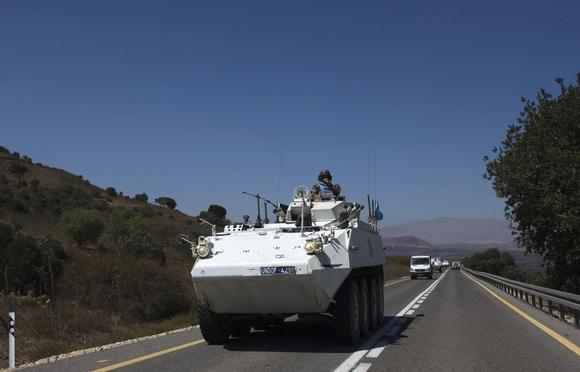 A member of the U.N. Disengagement Observer Force (UNDOF) rides atop an armoured vehicle near the Quneitra border crossing on the Israeli-occupied Golan Heights August 28, 2014. REUTERS/Ronen Zvulun

END_OF_DOCUMENT_TOKEN_TO_BE_REPLACED 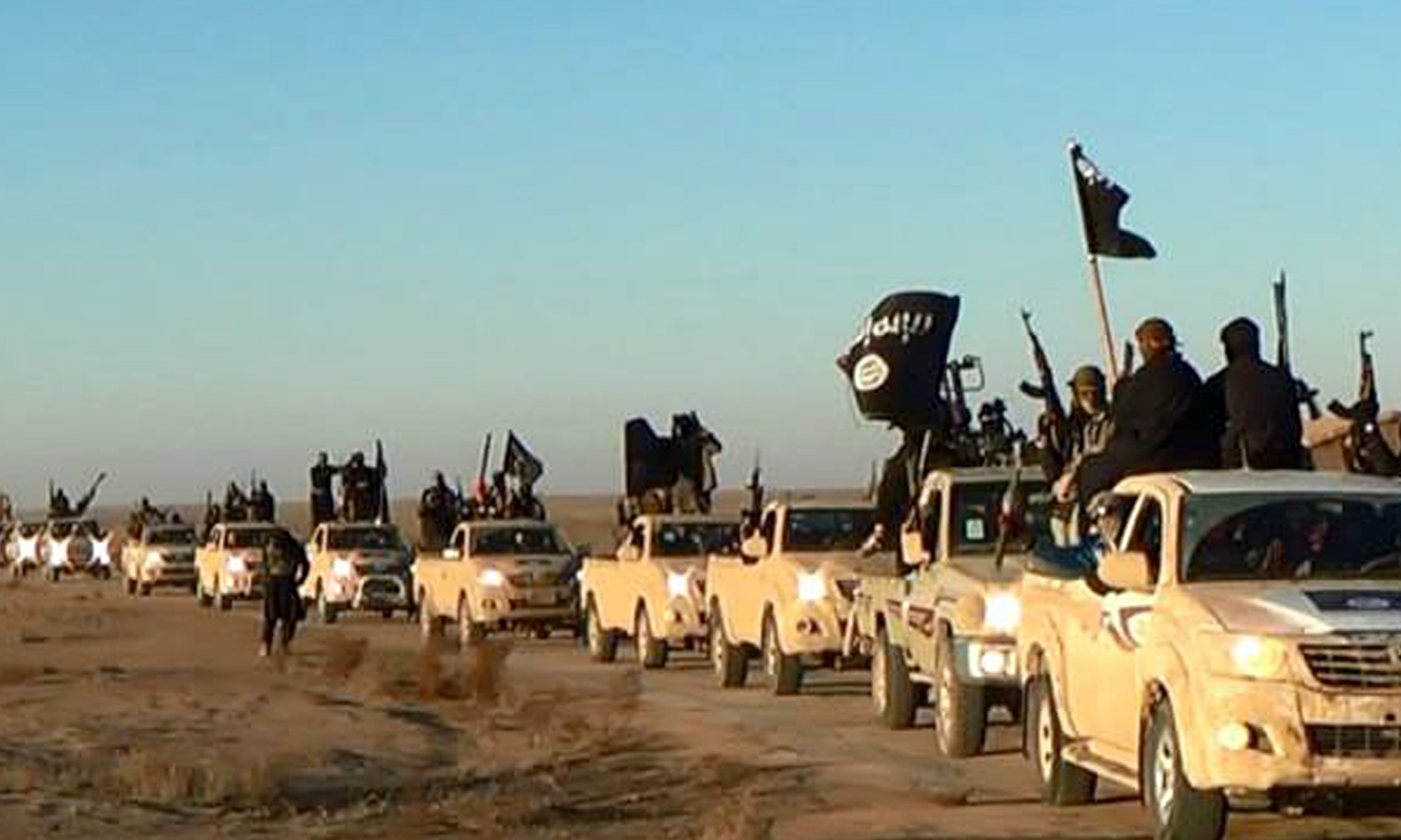 Isis fighters, pictured on a militant website verified by AP.

END_OF_DOCUMENT_TOKEN_TO_BE_REPLACED

Raqqa province has long been a stronghold for Isis militants, here seen with a captured tank.

END_OF_DOCUMENT_TOKEN_TO_BE_REPLACED 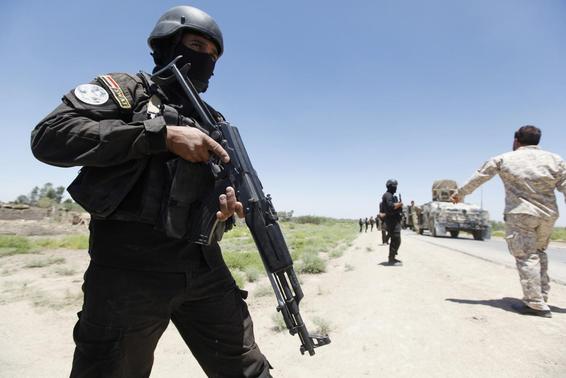 END_OF_DOCUMENT_TOKEN_TO_BE_REPLACED

A woman leads a police officer captured after a standoff with authorities over land grabs in Dongwiao Town, Fujian Province, on May 11, 2013. (molihua.org)

Villagers beset riot police during a land dispute with local officials in Nanhu village, Fujian Province on May 11. One officer was captured by villagers, tied up, and paraded through the village. (molihua.org)

Villagers beset riot police during a land dispute with local officials in Nanhu village, Fujian Province on May 11. (molihua.org)

Villagers beset riot police during a land dispute with local officials in Nanhu village, Fujian Province on May 11. (molihua.org)

During a standoff with authorities over land grabs in Fujian Province, villagers took several officials hostage, including a special force police officer who was handcuffed and paraded through town.

After repeated conflicts between police and locals over land confiscation and compensation issues, close to a thousand local townspeople from Dongqiao Town in Quanzhou City, gathered in front of the office of Nanhu Village Committee on May 11.

They threw rocks at the police, and police eventually backed into the office building. Villagers then entered the building and captured the county and town chiefs and two staff members, according to China’s Jasmine Revolution website, which covers human rights issues.

The Epoch Times telephoned Dongqiao Town Police Station on May 12, and the officer on duty did not deny the incident but hung up the phone.

According to a source, authorities are sending for more armed police, and the local residents are preparing to defend themselves.

The police have raided the village many times, and the conflict has worsened over China’s Jasmine Revolution said.

At 7 a.m. on May 4, about 100 special police officers went to the village, arresting and beating many.

On the evening of May 10, police again arrested villagers, resulting in a conflict with more than 2,000 residents.

The next morning, police continued arresting and beating people, including the elderly.

Mr. Feng, a Nanhu Village resident, told The Epoch Times that authorities illegally seized about 5,000 acres of villagers’ land near the Xingcuo Sea for a construction company from Quanzhou, and residents from nearby towns have been protesting the expropriation for a long time.

Feng said the average amount of arable land per person in the area is only 0.03 acres, and residents cannot get by on farming so depend heavily on ocean resources. Hence taking away over 5,000 acres of their land near the sea is threatening their livelihoods.

Local authorities have not communicated with the villagers nor provided them with reasonable compensation, Feng said. People have protested over this repeatedly, but still have not received any answers. The authorities also prohibited media from reporting on the matter.

Christopher Dorner Manhunt: Cabin Where Fugitive Ex-Cop Holed Up Is on Fire

The remote California mountain cabin in which fugitive ex-cop Christopher Dorner has barricaded himself in tense standoff with police is on fire, following a shootout with police in which one officer was killed and another wounded.

Once the fire started, a single shot was heard from inside the cabin and then flames and a large column of black smoke were seen rising above the snow-covered trees near Big Bear, Calif., ABC station KABC-TV in Los Angeles reported.

Dorner is a former Navy marksman and Los Angeles Police Department officer charged with murdering a police officer and suspected in the deaths of two other people, including the daughter of a former LAPD captain, earlier this month.

Dozens of local, state and federal authorities are at the scene in the San Bernardino Mountains, and have the the cabin surrounded. Dorner has sworn to kill police and their family members in a manifesto discovered online last week.

The search for Dorner, one of the largest manhunts in recent memory, took a turn this afternoon when police received a call that a suspect resembling Dorner had broken into a home in the Big Bear area, taken hostages and stolen a car.

The two hostages, who were tied up by Dorner but later escaped, were evaluated by paramedics and were determined to be uninjured.

Officials say Dorner crashed the stolen vehicle and fled on foot to the cabin where he barricaded himself and exchanged fire with deputies from the San Bernardino Sheriff’s Office and state Fish and Game officers.

Two deputies were wounded in the firefight and airlifted to a nearby hospital, where one died, police said. The second deputy was in surgery and was expected to survive, police said.

Police have sealed all roads going into the area and imposed a no-fly zone above the cabin, nestled in a wooded area that has received several inches of snow in recent days.

The San Bernardino County Sheriff’s Department stopped all traffic leaving the area and thoroughly searched vehicles, as SWAT team and tactical units could be seen driving toward the cabin, their sirens blaring.

Authorities say they believe Dorner may be watching reports of the standoff and have asked media not to broadcast images of police surrounding the cabin.

“If he’s watching this, the message … is: Enough is enough. It’s time to turn yourself in. It’s time to stop the bloodshed. It’s time to let this event and let this incident be over,” said Los Angeles Police Department spokesman Andy Smith, told reporters at a press conference.

Dorner faces capital murder charges that involve the killing of Riverside police officer Michael Crain, who was gunned down in an ambush last Thursday.

Since then a massive manhunt has been under way, focused primarily in the San Bernardino Mountains, but extending to neighboring states and as far away as Mexico.

A capital murder charge could result in the death penalty if Dorner is captured alive and convicted. Crain was married with two children, aged 10 and 4.

The charges do not involve the slayings of Monica Quan and her fiance, who were found shot to death Feb. 3. Quan was the daughter of former LAPD Capt. Randal Quan, who was mentioned as a target of Dorner’s fury in his so-called “manifesto,” which he posted on his Facebook page.

In the 6,000 word “manifesto,” Dorner outlined his anger at the Los Angeles Police Department for firing him, and made threats against individuals he believed were responsible for ending his career with the police force five years ago.

Dorner’s grievance with police goes back five years, to when he was fired after filing what the LAPD determined to be a false report accusing other cops of brutality.

The LAPD has assigned 50 protection details to guard officers and their families who were deemed possible targets.

BEIRUT –  Rebels captured a military air base in northern Syria on Tuesday, their second major strategic victory in as many days, activists said.

The assault on the al-Jarrah airfield in Aleppo province comes a day after opposition fighters seized the nation’s largest dam, an iconic industrial symbol of the four-decade rule of President Bashar Assad’s family. The rebels have had their biggest success in Syria’s civil war in the northeast, and the twin victories appeared to indicate they were solidifying their control of large swaths of the country’s once heavily-contested north.

The director of the Britain-based Syrian Observatory for Human Rights, Rami Abdul-Rahman, said that after days of sporadic clashes around the al-Jarrah airfield, rebels launched a major assault on the base on Monday and had overrun the facility by Tuesday morning.

He said several regime troops in the area were killed or wounded in the fighting, while others fled as the rebels advanced. There was no word on opposition casualties.

The airfield, which is located near the al-Furat dam captured on Monday, housed fighter jets that have been carrying out airstrikes on rebel held-areas around the country.

A video posted online by activists showed several military aircraft at al-Jarrah, some of them parked on the tarmac while another is in a hanger with boxes of ammunition piled up against a wall nearby.

“These warplanes are now in the hands of Ahrar al-Sham Islamic movement,” one rebel says in the video, referring to a specific rebel unit.

The video appeared genuine and corresponded to other Associated Press reporting on the events depicted.

The air base is located near the northeastern town once known as Tabqa. The town’s name changed to Thawra, Arabic for revolution, after the al-Furat dam was built there in the late 1960s.

Rebels led by the al-Qaida-linked militant group Jabhat al-Nusra captured the al-Furat dam on Monday, taking control over water and electricity supplies for both government-held areas and large swaths of land the opposition has captured over the past 22 months of fighting.

While the rebels control many areas in the north and east of the country, and hold whole neighborhoods of the city of Aleppo, Syria’s largest urban center and its main commercial hub, the government maintains a tight grip on Damascus, and several central provinces, including Homs and Hama.

For nearly a week, the rebels have been trying to slowly battle their way into the capital from neighborhoods and towns on its doorstep, and have punched to within a mile of the heart of the city.

Fighting continued in the capital on Tuesday. Activists said government warplanes carried out air raids on opposition strongholds in several suburbs Tuesday including Zamalka and Douma.

In Turkey, Interior Minister Muammer Guler said the death toll from an attack on a border crossing with Syria’s Idlib province had risen from 13 to 14.

The frontier area has seen heavy fighting, although attacks on the crossings that are used by Syrian refugees and international aid agencies have been rare.

There was no claim of responsibility for Monday’s blast. Turkey’s deputy prime minister, Besir Atalay, said Tuesday that a preliminary investigation indicated three assailants parked a car packed with explosives in no-man’s land between two border gates, then detonated it remotely about 20 minutes later.

Atalay said the car had Syrian license plates. He did not say who was behind the attack, only that the probe into the blast is ongoing.

Tensions have flared between the Syrian regime and Turkey in the past months after shells fired from Syria landed on the Turkish side of the border, prompting Turkey to return fire.

Germany, the Netherlands and the United States decided to send two batteries of Patriot air defense missiles each to protect Turkey, their NATO ally.

Turkey, formerly an ally of Damascus, has backed the opposition in the uprising against Assad’s rule that erupted in March 2011 and has claimed more than 60,000 lives according to the United Nations.