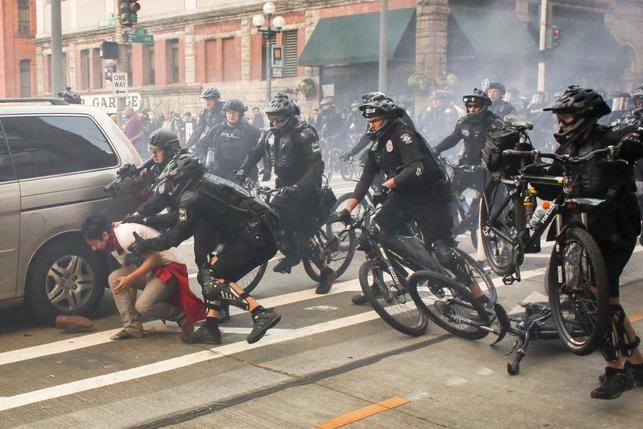 END_OF_DOCUMENT_TOKEN_TO_BE_REPLACED

Dan Sandini at Daylight Disinfectant recently posted video from the “May Day” protests in Portland, Oregon, and one of them alarmingly shows a group of young individuals dancing around a golden calf.

Sandini’s description of the video reads:

Warning:  Video can not be “unseen.”  ”It is useless to resist it,” or so go the lyrics.  On May 1 2013, Occupy Portland dragged an idol of a Golden Bull down to O’Bryant Square.

Dressed as Egyptian belly dancers they then proceeded to sing and dance about it.  You just can’t make this stuff up folks.  About three minutes 34 seconds of you life that you can’t get back.

Here are a few screen shots from the clip:

TheBlaze spoke with Sandini to get more information.

“I was kinda flabbergasted at it,” he said of the scene.  “I really thought that it’s quite ironic that a lot of what we see going on around us now is not a very positive thing for society, and if you bring this back to the golden calf with Moses, I thought, isn’t that weird.  I wonder if they see that in their own display, that they’re mimicking that.”

If you look closely at the calf, you can see that the logos of companies like Shell and Walmart are taped to its base.  Coupled with the dollar signs on the dancers’ headdresses, it’s also possible they were trying to imply it’s the ​capitalists​ who are worshiping the golden calf.

Back in 2011, Occupy Wall Street protesters also marched a likeness of a golden calf they called “greed” into Zucotti Park.

“It’s a false idol, just as much as the Wall Street bull has been a false idol for so many of us for so long,” protester Ed Needham reportedly explained.

Watch the complete video from Portland and let us know what you think, below: