Rescue personnel work at the site where a tourist bus crashed killing at least 49 people, according to the the Santa Catarina State security secretary, near the city of Joinville, southern state of Santa Catarina, Brazil, Saturday, March 14, 2015. (AP Photo/Salmo Duarte, Agence RBS)

END_OF_DOCUMENT_TOKEN_TO_BE_REPLACED

Photo: The scene of the crash in Haymarket in central Sydney. (ABC: Katie Hamann)

END_OF_DOCUMENT_TOKEN_TO_BE_REPLACED

7 killed when tourist bus plunges into ravine in Bali

Bali — A tourist bus plunged into a ravine on the Indonesian island of Bali, killing seven people, including five Chinese tourists, on Monday afternoon.

END_OF_DOCUMENT_TOKEN_TO_BE_REPLACED

At least 38 people were killed and dozens injured on Monday when a bus went off a cliff on a hairpin bend in rural Guatemala, tumbling some 200 metres (660 feet) into a river at the bottom of a ravine, officials said.

Members of the public prosecutor’s office and rescuers work on the site of the bus accident, about 65 km west Guatemala City Photo: AFP/GETTY

Rescue workers said that the bus, which plunged off of a paved highway roughly 60 km (37 miles) northwest of Guatemala City, was completely destroyed and that 46 people had been taken to nearby hospitals to be treated for injuries.

Investigators do not yet know what caused the crash or what was the final destination of the bus, which was traveling south toward Guatemala City. Rescue workers said that conditions were dry and mostly sunny and that the bus was likely over capacity.

“There are 38 dead, among them six children and 12 women,” said Sergio Vasquez, a volunteer firefighter at the site of the accident.

Local television said many of those on the bus were vendors taking farm produce to market.

The last major bus accident in Guatemala occurred in 2008 when an overcrowded bus slid off a highway and down a 15-metre (50-foot) slope some 65 km (40 miles) southeast of the capital, killing 53.

Washington (CNN) — Family members of the Rev. Martin Luther King Jr. were involved in a bus accident Wednesday after the high-profile ceremony marking the 50th anniversary of King’s “I Have a Dream” speech, police said.

The bus and a car collided near Washington’s Tidal Basin just off the National Mall where the ceremony was held, according to Park Police, who have jurisdiction over the Mall.

They said a person in the car was injured and taken to a hospital but did not provide information on injuries to bus passengers.

Several members of the King family were aboard the bus and had laid a wreath at the memorial to the civil rights leader, according to Omarosa Manigault, a reality television star who was aboard the bus.

“We were very afraid,” she told CNN. “There were children on the bus, seniors and everything. Everybody was thrown out of their seats.”

She said she hit her head in the accident. 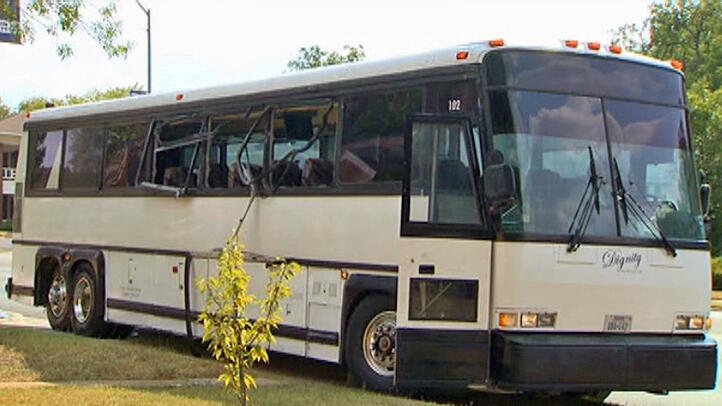 Ashlie Ramos, 11, and Nyasia Quinones, 7, were named Saturday as the victims of the crash near Sanford.

They were in a Mazda 626 driven by Andrea N. Ruz, 30, of Deltona that was eastbound on Ronald Reagan Boulevard near State Road 417 about 4:30p.m. That’s when the car turned left in front of a Seminole County school bus with three students on board, Florida Highway Patrol Trooper Wanda Diaz said.

The bus hit the passenger side of the car, Diaz said. The bus driver and students were not hurt.

END_OF_DOCUMENT_TOKEN_TO_BE_REPLACED

Source – The death toll has risen to 41 in a bus accident in Kenya, police said Thursday.

Thirty-five passengers were killed on the spot when the driver of the speeding bus lost control near Narok, 150 kilometres away from the capital, Nairobi, late Wednesday.

“We confirmed 41 people lost their lives, 37 casualties were treated at Narok District Hospital and four others were referred to Kenyatta National Hospital,” said Kimaru.

“The driver approached the place at high speed and was unable to control the vehicle,” he added.

It was still unclear if the driver was among the dead, Kimaru said.

In the six months until July, some 1,433 people have died in road accidents, police statistics show.

A Disney Magical Express bus rammed into the back of a passenger vehicle on Walt Disney World property, according to the Florida Highway Patrol. A woman in her 60s is dead.

At least one person has died in a crash involving a Disney’s Magical Express bus and another vehicle near Epcot on Friday afternoon, according to Florida Highway Patrol.

A tragic car crash at the most magical place on earth has given some tourists a vacation they’ll never forget–for all the wrong reasons.

Around 3 p.m. on Friday, a Disney Magical Express bus crashed into a car on Walt Disney World property, leaving one person dead.

The accident happened on Epcot Center Drive when the bus carrying 36 passengers rammed into the rear of the passenger vehicle. Witnesses told the Florida HIghway Patrol that the car appeared to be slowing down or stop, possibly from mechanical problems, right before the accident.

A 63-year-old woman who was driving the car was transported to a local hospital in critical condition, an FHP spokesperson told The New York Daily News. The woman was later declared dead.

Two other people on the bus, a teenager and a toddler, were taken to the hospital with minor injuries.

The Magical Express bus is a free shuttle that is owned and operated by the Mears Transportation company. It takes tourists from Orlando International Airport to Walt Disney World.

Twitter user @mom2tnj said that she was on the bus at the time of the accident. The mom was arriving from the airport for a three-day vacation. She says her son is traumatized by what he’s seen.

“Can’t imagine having fun after this,” she tweeted. “Horrifying.”

With the Associated Press