END_OF_DOCUMENT_TOKEN_TO_BE_REPLACED

If certain federal employees are “non-essential,” then why are they employed in the first place?

On October 1st, the federal government shut down as a direct result of Congress failing to approve a Continuing Resolution to fund the government, or, more accurately, as a result of 535 career politicians and 1 community organizer failing to agree on how to spend money that the United States doesn’t have in the first place.

The visible effects of this supposed shutdown have, thus far, been hardly different from business as usual. While many “non essential” federal workers have been furloughed, the House has approved a bill to provide those “non essential” federal workers with back pay once the government is “reopened” – or in other words, has given them a paid vacation. One wonders why, if these federal employees are non essential, they are employed by the federal government in the first place, at an annual cost ranging into the billions. Senators, Representatives, and the President will continue to receive paychecks, despite the very real threat that disabled veterans will not. We have continued to conduct domestic spying operations and foreign military operations, rolled out a multi-trillion dollar federally mandated health care bill, and have seen Congress and the President continue their meaningless game of jockeying for political position and engaging in a media offensive aimed primarily at garnering votes for the 2014 midterms.

END_OF_DOCUMENT_TOKEN_TO_BE_REPLACED

The U.S. Department of Defense awarded 94 contracts worth over $5 billion, including purchases for spy satellites, body armor and drones, on Sept. 30, the day before the government shutdown and at the end of the federal fiscal year.

The contracts include an extreme range of weapon, infrastructure and equipment to various military branches including (with prices in front):

The Air Force contracts in particular focused on sophisticated surveillance tech, including the aforementioned drones, spy satellite support, and logistics for a fleet of spy planes.

END_OF_DOCUMENT_TOKEN_TO_BE_REPLACED

It appears investors (CDS markets, VIX, T-Bills anxiety) were on to something as each side in the  looming government shutdown debate seems mired in their own belief that the other has more to lose. House Republicans are aiming to hold a vote today on a bill to extend government funding through December 15th and ensuring the military gets paid on any shutdown, but…

And as the WSJ reports, Harry Reid has already stated that “we are going to accept nothing as it related to Obamacare,” before adjourning the Senate until Monday afternoon (narrowing the gap for a shutdown-avoidance vote). The shutdown-blame-game has begun as it seems the ball is back in the Senate’s court…

– BOEHNER SAYS WILL BE `UP TO THE SENATE’ TO AVOID SHUTDOWN

END_OF_DOCUMENT_TOKEN_TO_BE_REPLACED

$5.25 Million For Senate Hair Care And 21 Other Ways Politicians Are Living The High Life At Your Expense

If you want to live the high life, you don’t have to become a rap star, a professional athlete or a Wall Street banker.  All it really takes is winning an election.  Right now, more than half of all the members of Congress are millionaires, and most of them leave “public service” far wealthier than when they entered it.  Since most of them have so much money, you would think that they would be willing to do a little “belt-tightening” for the sake of the American people.  After all, things are supposedly “extremely tight” in Washington D.C. right now.  In fact, just the other day Nancy Pelosi insisted that there were “no more cuts to make” to the federal budget.  But even as they claim that things are so tough right now, our politicians continue to live the high life at the expense of U.S. taxpayers.  The statistics that I am about to share with you are very disturbing.  Please share them with everyone that you know.  The American people deserve the truth.

According to the Weekly Standard, an absolutely insane amount of money is being spent on the “hair care needs” of U.S. Senators…

Keep in mind that there are only 100 U.S. Senators, and many of them don’t have much hair left at this point.

But hair care is just the tip of the iceberg.  The following are 21 other ways that our politicians are living the high life at your expense…

END_OF_DOCUMENT_TOKEN_TO_BE_REPLACED

(CNSNews.com) – Unborn babies who have reached at least 20 weeks of age in utero are aborted at a rate of about 30 per day in the United States, according to the Congressional Budget Office.

The CBO has also concluded that aborting babies at 20 weeks or later in pregnancy saves money for the government-run federal-state Medicaid system.

The CBO made these determinations when doing its official “Cost Estimate” of a federal bill that would prohibit abortions at 20 weeks or later into pregnancy (except in cases of reported rape, incest against a minor or to save the life of the mother).

“Based on data compiled by the Centers for Disease Control and Prevention (CDC), CBO estimates that, each year, about 11,000 abortions take place 20 weeks or more after fertilization,” said the CBO’s analysis of H.R. 1797, the Pain Capable Unborn Child Protection Act.

In a 365-day year, 11,000 late-term abortions works out to a little more than 30 per day—counting weekends and holidays.

END_OF_DOCUMENT_TOKEN_TO_BE_REPLACED

The $46-billion security package in the immigration bill would benefit aerospace, technology and security companies, as well as border states. 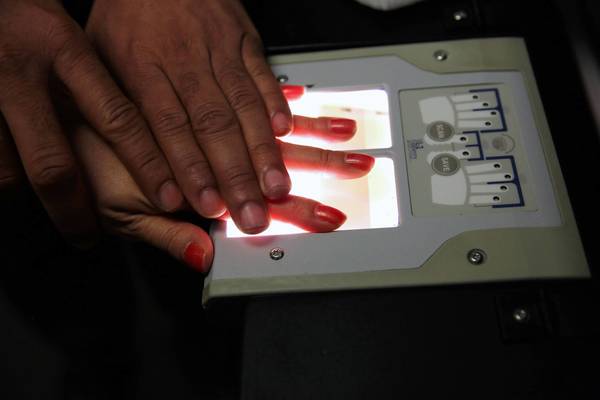 The Senate immigration bill includes a plan to check the fingerprints of foreigners leaving the U.S., an idea the Homeland Security Department says would do little to halt illegal immigration. (John Moore / Getty Images / May 30, 2013)

WASHINGTON — A plan to check fingerprints of foreigners leaving the U.S. is popular in Congress — but not at the Homeland Security Department, where officials say the technology would do little to halt illegal immigration.

But thanks in part to lobbying by security contractors, the Senate immigration bill that goes to the Republican-led House this week includes a computerized “biometric” exit system that could cost more than $7 billion.

The plan is part of the bill’s $46-billion border “surge” of security measures, a 10-year spending gusher that would produce a financial bonanza for some of America’s largest aerospace, technology and security companies, as well as some border states.

The legislation would force the Homeland Security Department — which has a total proposed budget of $39 billion in fiscal year 2014 — to absorb a staggering increase in funding, equipment and staff at a time when most federal agencies and departments are struggling with budget cutbacks, furloughs and reduced services.