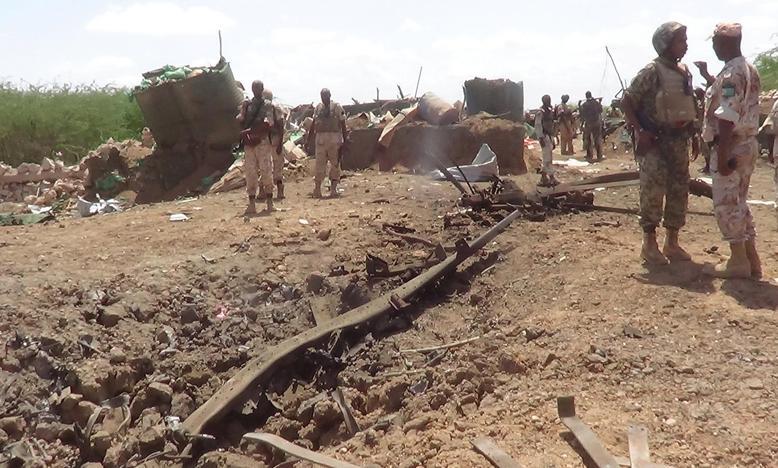 African Union Mission in Somalia (AMISOM) peacekeepers assess the scene of an explosion after members of the al Shabaab Islamist group rammed a suicide truck bomb into their military base in the area of Beledweyne town, north of the capital Mogadishu, October 25, 2016. REUTERS/Stringer

END_OF_DOCUMENT_TOKEN_TO_BE_REPLACED

Al-Shabab says it is at war with Kenya

END_OF_DOCUMENT_TOKEN_TO_BE_REPLACED

Traffic on a road in Kampala. Photograph: Des Willie/Alamy

END_OF_DOCUMENT_TOKEN_TO_BE_REPLACED

Members of Somalia’s Al Shabaab militant group parade during a demonstration to announce their integration with al Qaeda, in Elasha, south of the capital Mogadishu, last year Photo: AP

The US strike took place just a day after Al Shabaab, which are linked to Al-Qaeda, called for attacks against foreign forces

END_OF_DOCUMENT_TOKEN_TO_BE_REPLACED

Kenya’s National Intelligence Agency (NIS) warned some people not to visit the Westgate shopping mall in Nairobi before the bloody siege, a warning that was not received by the 67 victims who lost their lives during the attack.

Buried at the end of a London Independent report about the incident is the revelation that NIS, “did warn the police and officials inside the President’s office before the Westgate siege, but its warnings went unheeded.”

Individual officials with NIS also told their family members to avoid the Westgate mall on Saturday because it would be the target of an attack. A pregnant policewoman was warned by her brother, an NIS officer, not to visit Westgate.

END_OF_DOCUMENT_TOKEN_TO_BE_REPLACED

(Reuters) – The leader of the Somali Islamist militant group al Shabaab has for the first time confirmed claims by members of his group that it was behind the attack on a Nairobi shopping mall that killed at least 72 people and destroyed part of the complex.

In an audio posted on the al Shabaab-linked website http://www.somalimemo.net on Wednesday night, Ahmed Godane, also known as Mukhtar Abu al-Zubayr, said the attack on the mall was in retaliation for Kenya’s incursion in October 2011 into southern Somalia to crush the insurgents.

“Take your troops out or prepare for a long-lasting war, blood, destruction and evacuation,” Godane said in the message, apparently directed at the Kenyan government.

An American woman who was trapped inside the Nairobi mall as terrorists ran amok claims she was eventually rescued by an ‘American security team’.

END_OF_DOCUMENT_TOKEN_TO_BE_REPLACED

A car bomb has exploded near a government convoy in the Somali capital Mogadishu, killing at least seven people, officials say.

A police spokesman told AFP news agency a suicide attacker had driven a car laden with explosives at an armoured government vehicle.

The attack comes days before a conference in London on Somalia.

No group said immediately it had carried out Sunday’s attack.

The country’s main Islamist group al-Shabab, which is part of al-Qaeda, has been forced out of the main cities in the south and centre but still controls smaller towns and many rural areas.

Ten people were also injured by the explosion, BBC reporter Mohamed Ibrahim reports from the city.

Government forces had only re-opened the main roads in Mogadishu on Saturday after a four-day ban on vehicle traffic, he adds.

The ban had been aimed at preventing attacks by al-Shabab.

A Reuters news agency photographer said he could see three people lying motionless near the wreckage of four burning cars.

The London conference will discuss how best the international community can support Somalia’s progress.

More than 50 countries and organisations are due to take part when it opens on Tuesday, co-hosted by Somali President Hassan Sheikh Mohamud and UK Prime Minister David Cameron.

The UK recently re-opened its embassy in Mogadishu.

The security situation in city was thought to have been improving after two decades of conflict, despite occasional attacks.

Al Shabaab rebels seized Hassan Gulled, 25, on March 23 in Bulo Marer near Qoryoley District, they said. Gulled, who had fled to Kenya in 2007 in search of safety and a better life, had left Kenya on Feb. 27 to visit family in Somalia, sources said.

Gulled is one of dozens of Somali refugees in Kenya facing dangers from Al Shabaab extremists as they return to Somalia following the establishment of a new government in Mogadishu and the weakening of Al Shabaab, which once held large swathes of territory.

As Gulled was only visiting family in Somalia, his wife remained in an undisclosed city in Kenya. Al Shabaab extremists in Kenya who knew of his Christian activities there apparently contacted members of the militant group in Somalia, who monitored his movement for three weeks before seizing him, sources said.

“Four masked, armed militia from Al Shabaab took Gulled into a Land Cruiser and then drove away as family watched him helplessly,” said one source.

Another source said it was confirmed that Gulled has been jailed in Bulo Marer.

“The Al Shabaab have been torturing him to see whether he would deny his Christian faith,” the source said. “Since last week, no information has surfaced concerning Gulled. There is a possibility that he could have been killed.”

A militant Islamist group with ties to Al Qaeda, Al Shabaab has a base in Bulo Marer, about 50 miles from Mogadishu. Last week, however, Somali government troops backed by African Union Mission in Somalia (AMISOM) forces had reportedly taken control of nearby Qoryoley. Al Shabaab has vowed to rid Somalia of Christians, who meet secretly due to persecution – besides Al Shabaab, the government and many in Somali society also view leaving Islam as deserving of death.

Gulled became a Christian in Kenya in 2010. He married there in 2011 and has no children.

“Gulled’s wife is very distressed and worried that she might not see her husband again,” a source said.

Many Somali members of Christian fellowships in Kenya have returned to Somalia after formation of a Somali government on Aug. 20, 2012, which replaced the Transitional Federal Government, said the source, who requested anonymity.

“Several Christian agencies are helping them settle,” he said. “But we are worried that some of our members are being monitored closely by Islamic extremists.”

Al Shabaab has lost control of several areas of Somalia since Kenyan military forces helped to dislodge them in the past year, but they are suspected in the shooting death of a Christian pharmacist on the outskirts of Kismayo in February. Two masked men killed Ahmed Ali Jimale, a 42-year-old father of four, on Feb. 18 as he stood outside his house in Alanley village (see Morning Star News, Feb. 28).

Siad and his wife, who converted to Christianity in 2000 according to a source who used to worship with them, had moved to Beledweyne from Doolow eight months before, after Somalia’s transitional federal government and African Union Mission in Somalia troops captured Beledweyne from Al Shabaab rebels.

The area was under government control and there was no indication that the killers belonged to the Al Shabaab rebels who have vowed to rid the country of Christianity, but the Islamic extremist insurgents were present in Buulodbarde, 20 kilometers (12 miles) away, and Christians believed a few Al Shabaab rebels could have been hiding in Beledweyne.

In the coastal city of Barawa on Nov. 16, 2012, Al Shabaab militants killed a Christian after accusing him of being a spy and leaving Islam, Christian and Muslim witnesses said. The extremists beheaded 25-year-old Farhan Haji Mose after monitoring his movements for six months, sources said (see “Morning Star News, Nov. 17, 2012).

Mose drew suspicion when he returned to Barawa, in Somalia’s Lower Shebelle Region, in December 2011 after spending time in Kenya, according to underground Christians in Somalia. Kenya’s population is nearly 83 percent Christian, according to Operation World, while Somalia’s is close to 100 percent Muslim.

Somalia’s interior minister says that nine militants attacked Mogadishu’s Supreme Court complex and that all have been killed.

MOGADISHU, Somalia —Somalia’s interior minister says that nine militants attacked Mogadishu’s Supreme Court complex and that all have been killed.

Abdikarim Hussein Guled said that six of the attackers detonated suicide vests and three others were shot and killed during Sunday’s assault on the court complex in the Somali capital.

The attack – the most serious in Mogadishu since al-Shabab militants were forced out of the city in August 2011 – lasted several hours and involved running battles with security forces.