(Natural News) It took just one FBI raid on President Trump’s private residence to spark an historic backlash against the corrupt, lawless FBI, DOJ and Biden regime. Until today, any talk of abolishing the IRS, dismantling the FBI or nullifying the ATF was just “fringe” talk. But thanks to the FBI, it’s now mainstream conservative talk.

The FBI raid on Mar-A-Lago — during which the FBI obviously planted evidence to try to frame Trump just as they did with RussiaGate — has galvanized conservative America while sparking widespread outrage at the lawlessness and criminality of the illegitimate Biden regime, an enemy occupying force that claims to rule of America but is actually run by criminal tyrants and fraudsters who rigged the 2020 to steal political power from the people.

The FBI — America’s largest domestic terrorism cartel — is now running an armed war against the American people and conservative political leaders, and this startling reality has become apparent even to members of Congress and Republican candidates for office.

AZ governor candidate Kari Lake tweeted a strong statement about all this, essentially calling for outlawing federal agents from the entire state of Arizona. “We must fire the Federal Government,” she demanded, adding, “[we] will save our Republic and the road to stripping the Feds of power travels right through Arizona.”

Similarly, Rep. Anthony Sabatini issued a tweet calling for nullification of the DOJ and the mass arrest of rogue FBI agents:

Sever all ties with DOJ immediately

Rep. Paul Gosar went even further, stating, “We must destroy the FBI” and “We must save America.” This sentiment is exactly what the American people feel:

A “weaponized” Department of Justice (DOJ) under the Biden administration today, Johnson said in an interview with The Epoch Times, is attacking the foundational “pillars” upon which the greatest Constitutional Republic was built and undermining American citizens’ faith in the nation’s institutions.

It’s rather clear that the FBI, DOJ, ATF, DEA, EPA, IRS and all the other tyrannical government departments don’t care one bit about public faith in “institutions” of government. All they care about is their own power and money. Since they think they’ve rigged the entire system against We the People, they no longer act as if they will ever have to answer to voters ever again.

Gone is any pretense of “serving” the public. That’s been replaced with the tyranny of lording over the public, threatening them, coercing them or just shoving guns in their faces to loot their belongings like what happened at Mar-A-Lago.

The IRS, for example, is running help wanted ads for tax enforcement agents who are “willing to use deadly force” against the American people. This is openly touted by the IRS in multiple job openings that also declare applicants must be willing to “participate in arrests, execution of search warrants, and other dangerous assignments.” 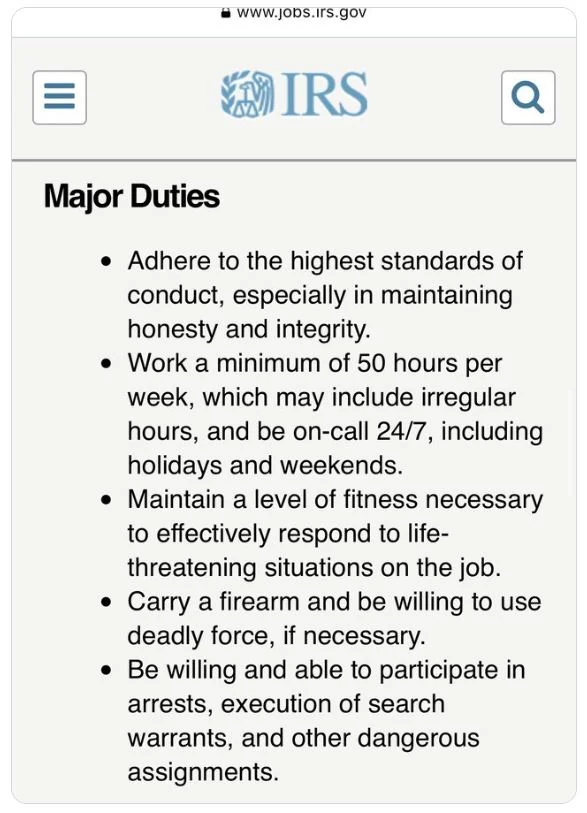 Here’s a link to one of these job openings at USAjobs.gov, where the phrase, “deadly force” has now been removed after news of this job opening went viral.

Note that all such job applicants must take all required COVID-19 vaccines, which means they have to submit to a suicide cult death shot in order to work for the larger suicide cult which is the globalist government regime. Some people will do anything to wield power over their fellow citizens, even if it means killing themselves with a clot shot in the process.

When government ceases to “serve” the people and becomes the enemy of liberty and constitutional liberties, the people withdraw their consent. And that’s happening everywhere now. More and more people realize the FBI is an armed terrorism cartel with no constitutional authority whatsoever.

This video is an excellent demonstration of what can happen when you call the police on ATF agents who are harassing you with unconstitutional powers and threats. The best part is when the tyrannical, arrogant ATF agent claims, “I have a medical condition…” followed by, essentially, “Don’t tase me bro!”

Most of America can’t wait for local cops to start mass arresting rogue FBI agents, ATF agents, IRS agents, armed EPA enforcers and the whole lot of lawless, tyrannical, criminal bureaucrats and terrorists who are at war with the American people.

Soon, in the “free” states run by Republican governors where nullification action is taken, local police are likely to start arresting FBI agents on sight. That should be the goal of every red state: to nullify federal powers within the state, and issue arrest warrants for all federal agents that wield unconstitutional powers over the American people. This would include the IRS, ATF, DEA, EPA, FBI, DOJ, FCC and many more.

America is no longer a nation of laws. The Constitution has been utterly abandoned by the lawless Biden regime. The illegitimate occupying government is at war with the American people, and finally mainstream conservatives are sounding the alarm that those of us in independent media have been sounding for years. The American people will no longer provide consent to the tyrants and terrorists of the federal bureaucracy which has become heavily armed and weaponized against the American people (why do IRS agents need $700,000 in ammo all of a sudden?).

When we take back the House, the Senate and the White House, we must gut the entire federal bureaucracy and decrease the size of the federal government by 90 percent. Send them all packing and prosecute those who violated their oaths of office. They do not deserve our consent, our tax dollars or our cooperation. Most of them deserve to spend life in prison.