(SOURCE)    The state of Minnesota is requesting 1,000 additional National Guard soldiers as rioting broke out once again Friday night following the death of George Floyd earlier in the week.

Guard personnel already deployed in addition to state and local police just haven’t been able to control the violence and unrest that the Minneapolis-St. Paul area has seen in recent days, Walz said.

“This is the largest civilian deployment in Minnesota history that we have out there today and quite candidly right now, we do not have the numbers,” Walz said. “We cannot arrest people when we are trying to hold ground because of the sheer size, the dynamics and the wanton violence.” 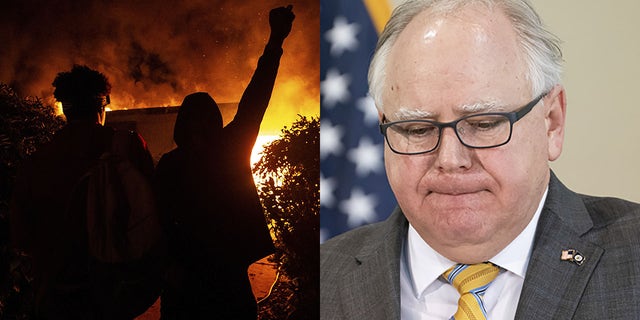 Minneapolis police said gunshots were fired at police officers near the city’s Fifth Precinct on Friday night, one night after rioters broke into and torched the Third Precinct, FOX 9 reported.

Meanwhile, the Pentagon – at the request of President Trump – has placed U.S. military police on alert for a possible rapid deployment to Minnesota, The Associated Press reported. Soldiers at Fort Bragg in North Carolina and Fort Drum in New York have been asked to be ready within four hours of a call, while those at Fort Carson in Colorado and Fort Riley in Kansas have been asked to be ready within 24 hours, sources told AP.

Floyd’s death Monday – for which four Minneapolis police officers were fired Tuesday and one of them, Derek Gauvin, was arrested and charged with third-degree murder Friday – has sparked protests and rioting across the U.S., from New York City and Washington, D.C., to Chicago; Columbus, Ohio, Louisville, Ky., and Dallas, to San Jose, Calif.; Los Angeles and Portland, Ore.

“The arrest of former Minneapolis police officer Derek Chauvin for the brutal killing of George Floyd is a welcome but overdue step on the road to justice,” Floyd family attorney Ben Crump said Friday, according to FOX 9. “We expected a first-degree murder charge. We want a first-degree murder charge. And we want to see the other officers arrested.” 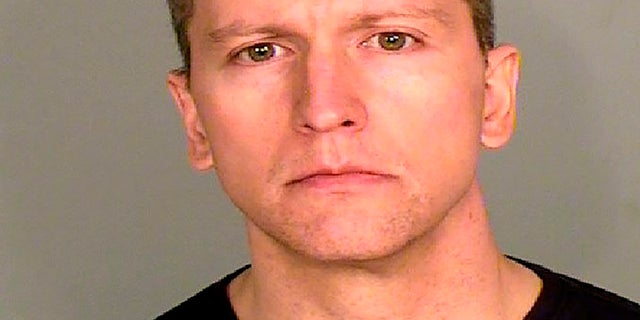 And all of it happened as the nation continues to grapple with the coronavirus pandemic, which has killed more than 100,000 Americans.

In Portland, Ore., a crowd smashed windows and sparked a fire inside the city’s Justice Center, FOX 12 of Oregon reported.

Breaking: Rioters have stormed the Multnomah County Justice Center in Portland, Oregon, and have set the building on fire. 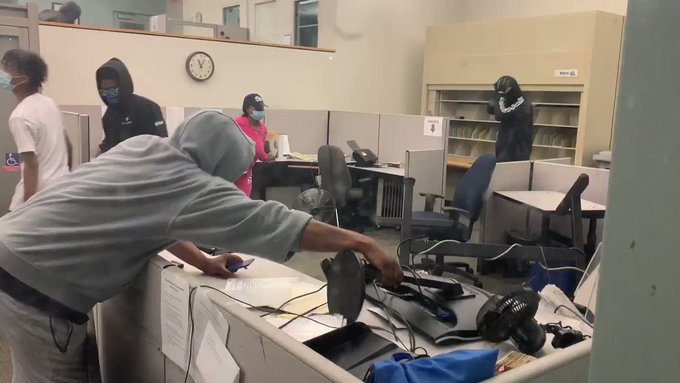 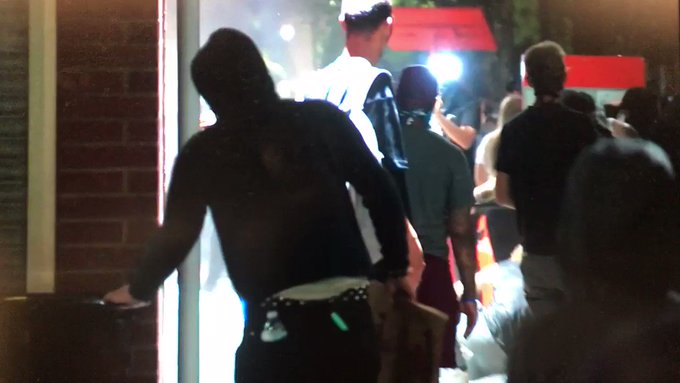 In San Jose, police officers fired on an SUV that struck at least two people, according to the Mercury News.

“The whole crowd started chasing the car but it got away,” Saul Duarte, a protester who recorded the incident on video, told the newspaper. “After that, everyone surrounded the two injured people and tried helping but the cops started tear-gassing us.”

“I got punched in the face and my cell phone was taken,” one motorist told FOX 2. 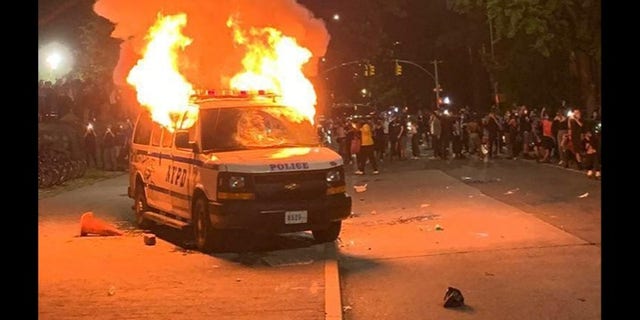 A police van goes up in flames in New York City.

In Washington, the White House was briefly placed on lockdown as crowds reached a boiling point, FOX 5 of DC reported.

In Atlanta, a crowd stormed the entrance to CNN headquarters, at one point climbing onto the TV network’s logo outside the building. 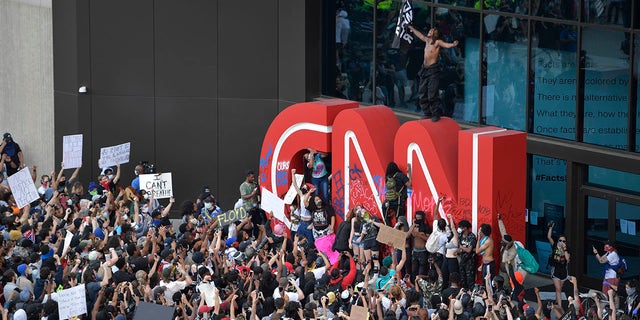 Demonstrators paint on the CNN logo during a protest, Friday, May 29, 2020, in Atlanta, in response to the death of George Floyd in police custody on Memorial Day in Minneapolis. (Associated Press)

“What I see happening in the streets of Atlanta is not Atlanta,” Bottoms said, according to FOX 5 Atlanta. “This is not a protest. This is not in the spirit of Martin Luther King Jr. This is chaos. A protest has purpose.”

“What I see happening in the streets of Atlanta is not Atlanta. This is not a protest. This is not in the spirit of Martin Luther King Jr. This is chaos. A protest has purpose.”

In Chicago, demonstrators shut down streets in the Loop, many of them chanting, “I can’t breathe,” which Floyd was heard saying on a video that went viral, showing a police officer kneeling on his neck, FOX 32 reported.

Early Saturday, Chicago police were deployed to the Trump International Hotel and Tower, where a crowd had gathered. 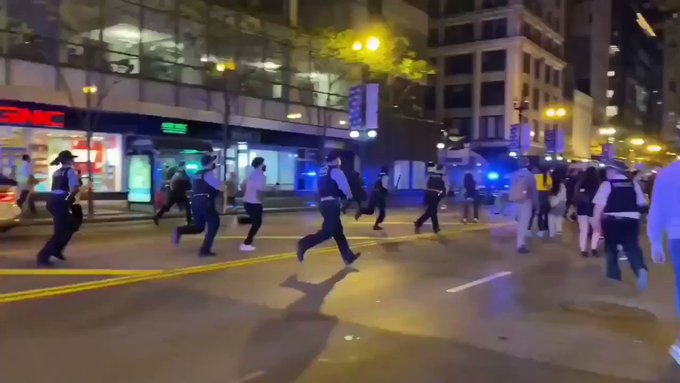 Video posted on social media showed people lying on the ground after apparently being struck by objects.

Hundreds of protesters filled the streets in Louisville, where they demonstrated for a second night not only against Floyd’s death but against the death of Breonna Taylor, an emergency room technician who was killed by a police officer in her home on March 13.

Some protesters are throwing water bottles at police in downtown Louisville, while officers are responding with tear gas. | @KatrinaWDRB 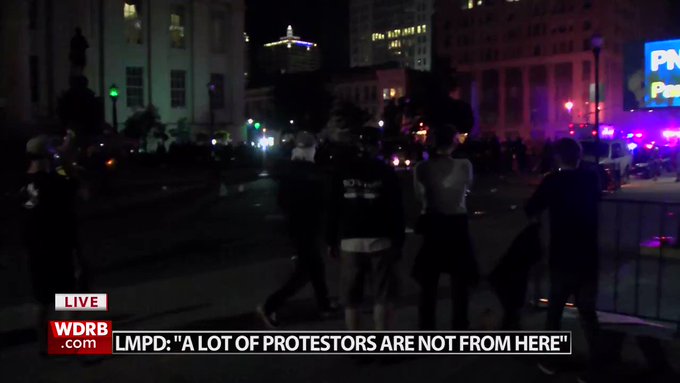 “This has been a very sad night for our city,” Louisville Mayor Greg Fischer told reporters just after 1 a.m. Saturday. “There needs to be ample recognition of the underlying inequity that causes so much of this frustration, but there is no excuse for the destruction of property we have seen this evening. This is not protest; it is violence.”

“There is no excuse for the destruction of property we have seen this evening. This is not protest; it is violence.”

Although fired Minneapolis police Officer Derek Chauvin has been arrested and charged with third-degree murder and manslaughter in connection with Floyd’s death, the three other officers who were fired in connection with the case have not been charged with any crimes – and it remained unclear when the protests and rioting would end.

The Associated Press contributed to this story.