It’s happening my friends, increased government control, censorship, and the loss of our rights and freedoms!  Sounds like the things straight out of a science fiction movie but its happening now in real life.

Do you believe for one minute that all of this just seemed to happen overnight without any fore thought whatsoever?  That all of these things, the lockdowns, the censorship, the draconian measures taken against all of the people in the world just happened at the drop of a hat without any plans ahead of time?  Well think again!

Like I have been saying since the beginning of this COVID-19 crisis, this was a man-made disease, it was released by man, and the crisis was preplanned way ahead of time, I truly believe this.  And the truth is coming out my friends, bit by bit, piece by piece, but the damage has already been done, and its not over yet, not by a long shot.

We have all been a part of a grand experiment, an agenda, a plan by the Elite to usher in a “New World Order”.  How many times have we heard that expression being used over the past several decades?  Way too many my friends, way too many!  And now its coming to fruition, the steps are being taken to usher in a One World Government, a One World Economy, a One World Religion, and a One World Currency.

This coronavirus crisis is only one step, there are many more to come!  The world is being desensitized to increasing government control, to censorship, to new laws, and yes even to the draconian measures being taken upon all of us.  Its written by design to happen this way and it is.  And anyone speaking up and out against it will be censored, the ER doctors in Bakersfield California were only among the first.

Censorship is a major step in quieting those in dissent, those who hold beliefs that are against their plans, against their beliefs.  This was a part of the plan when “political correctness” hit the scene, a part of the brain-washing techniques on a grand-scale.  Another part of the brain-washing puzzle was the main stream media and fake news, propaganda on another grand scale!  What is to happen next for those that protest against increasing government control?  Arrests, shootings, lockups?  Perhaps this was the plan for the FEMA camps and mass coffins that we all heard about several years ago.  We never thought just how they may be used back then, but now it makes perfect sense!

And what is another way to force people into submission?  Fear!  Create mass fear among the people, give them something to fear about and offer the government as the only solution.  And with the crisis being worldwide there must be a governing force that is also worldwide, a One World Government, they’ll tell us that its the only way to overcome the crisis!

They tried to do the same thing with global warming, hoping that the world would unite together as one in such a crisis, but it didn’t work, not as they hoped that it would anyway!  However, I believe that they will still use it in their tool box of crises.

So they may just ease restrictions on us a bit, at least for a little while.  But then what happens the next time if and when the virus hits in the Fall?  Will it be even worse?  Will they then begin to institute Martial Law?  It seems to have gotten close to that now in many areas of the country.

Like I said, Bill Gates is a major player in the Elite group of individuals, and according to him things won’t get back to normal until everyone has been vaccinated against COVID-19, does that mean that he wants us locked down until they can vaccinate everyone on earth?!  It sure seems that way. 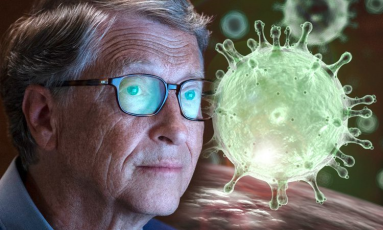 “It is fair to say things won’t go back to truly normal until we have a vaccine that we’ve gotten out to basically the entire world,”

I don’t know about you but I trust Bill Gates not even as far as I can throw him!  Bill Gates has placed himself as a world leader not because of who he is or anything that he has done, but because he is the second richest man in the world!  That’s it, nothing more nothing less.  He is a man with a global agenda, part of the Elite, part of a very sinister plan!  He is a man who desperately needs our prayers for salvation!

And if Bill Gates has his way then the entire structure of the world will completely fall apart, hence, the rebuilding of the entire world to their liking!  Sound farfetched?  Its happening now!

Why were these two ER doctors in Bakersfield California censored from YouTube?  Because what they were saying was in direct opposition to the globalist agenda!  It undermined their plans, it shined a light on the truth of the matter, it exposed the evil agenda for what it really is, and it made people sit up and really think about what is happening in the world around them.  It made people think for themselves, to wonder if just maybe what these two are saying is the truth and if all of us have been lied to!

I believe that people for the most part believe what they see on the news, they believe it and they eat it up without even questioning if what they are hearing is the truth or not.  They believe the news media, and they believe officials working for the government that tell them whatever it is they want the people to hear and believe, whether or not it just may be lies and propaganda.  They don’t believe that we could be lied to on such a grand scale.

This is where we are my friends, living in a world that has been turned upside down.  A world that is governed by an agenda, a world that has a sinister plan.  And when we see these things begin to happen then look up for our redemption draws near and the Tribulation period is getting closer!