The signs of the times indicate that we are living in the end times, the times spoken of by Jesus Christ Himself!  Not only are these signs here now in both numbers and intensity but many are calling them of “Biblical Proportions”!

Beginning in January of this year there have been massive locust invasions in Africa and now threatening Egypt as well! 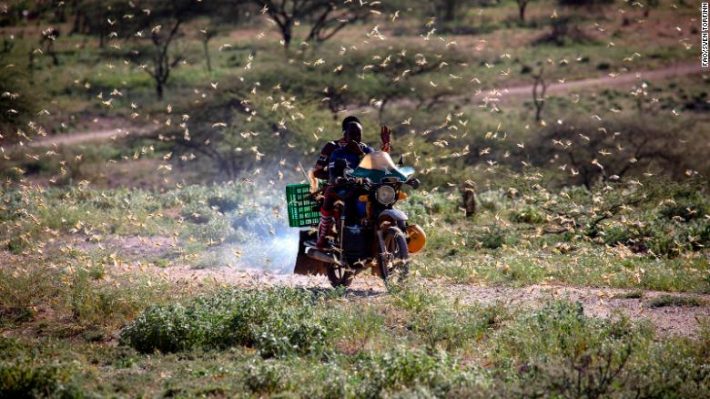 “Locust swarms of biblical proportions are threatening crops across a wide swath of Africa and southwest Asia—spurring alarm among top international officials.  A major concern is famine. The United Nations is warning that mass swarms of desert locusts are endangering food supplies in eastern Africa. In response, officials in Rome mobilized an emergency briefing yesterday in a bid to raise money—noting the situation has a high potential to devolve into a full-blown crisis…..”

But locust invasions are not the main concern and fear for most people living in the world today, no it’s not the invasion of locusts that has most people up at night but the very fast moving, deadly, and widespread 2019 Corona Virus, otherwise known as “COVID-19”.

This virus is very new and a very real threat since the beginning of the year 2020.  It has already spread from one corner of the earth in China to all four corners of the earth in a very short time span.  It seems that there hasn’t been anything that has been able to stop it from spreading thus far, and there are many unknowns about it such as just how to stop it if that is even possible!

These are two very real and deadly threats to humanity, two signs of the times of biblical proportions, both pestilence and famine!  But I would argue that there are many more my friends, many more, though some are just not quite as obvious.

Of course we can all see wars and rumors of wars all around us, they haven’t let up one bit over the past few decades, and I would argue that the threat of wars of increased intensity (the threat of nuclear war) have intensified dramatically and is a very real concern for the world today!  I truly believe that the world is closer to a nuclear war than at any other time in history, and that my friends is of biblical proportions!

How about the increase in deception?  The increase of false prophets and false teachers, of false Christ’s and those that come in the name of Christ?  Have we seen a dramatic increase in these things?  I would most definitely say yes, of course we have!  And Jesus warned us over and over again, as well as the apostles, that in the last days we would see an increase in deception, and I have to say my friends that it is rampant throughout the world, I would most definitely say of “biblical proportions”!

What about many in the church who have fallen away from the truth?  This is called “apostasy”, and we see it running rampant in the church today!  People who call themselves Christians are turning from the truth of God’s word and replacing it with fairy tales, with lies, with fables, with anything other than the truth.  We know from reading 2 Thessalonians 2 written by the apostle Paul.

“Now, brethren, concerning the coming of our Lord Jesus Christ and our gathering together to Him, we ask you, 2 not to be soon shaken in mind or troubled, either by spirit or by word or by letter, as if from us, as though the day of Christ had come. 3 Let no one deceive you by any means; for that Day will not come unless the falling away comes first, and the man of sin is revealed, the son of perdition, 4 who opposes and exalts himself above all that is called God or that is worshiped, so that he sits as God in the temple of God, showing himself that he is God.“

There are many other signs increasing dramatically, such as lawlessness, the loss of self-control, men turning away from God, men having a form of godliness but denying it’s power, wickedness and evil, turning good into bad and bad into good, etc, etc.

So when we see all of these things taking place then we know that the day of the Lord is near, that our gathering together with Him is even at the door!  And when we see these things happening in “biblical proportions” then we must be even that much closer than what we first believed!

He who dwells in the secret place of the Most High
Shall abide under the shadow of the Almighty.
2 I will say of the Lord, “He is my refuge and my fortress;
My God, in Him I will trust.”

3 Surely He shall deliver you from the snare of the fowler
And from the perilous pestilence.
4 He shall cover you with His feathers,
And under His wings you shall take refuge;
His truth shall be your shield and buckler.
5 You shall not be afraid of the terror by night,
Nor of the arrow that flies by day,
6 Nor of the pestilence that walks in darkness,
Nor of the destruction that lays waste at noonday.

7 A thousand may fall at your side,
And ten thousand at your right hand;
But it shall not come near you.
8 Only with your eyes shall you look,
And see the reward of the wicked.

9 Because you have made the Lord, who is my refuge,
Even the Most High, your dwelling place,
10 No evil shall befall you,
Nor shall any plague come near your dwelling;
11 For He shall give His angels charge over you,
To keep you in all your ways.
12 In their hands they shall bear you up,
Lest you dash your foot against a stone.
13 You shall tread upon the lion and the cobra,
The young lion and the serpent you shall trample underfoot.

We are told by Christ Himself to watch and be ready, to look for the signs, to know the season.

5 thoughts on “Signs of Biblical Proportions! Look up!”