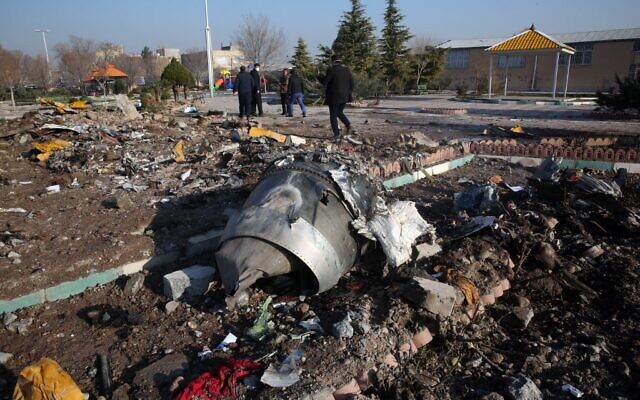 Rescue teams work amid debris after a Ukrainian plane carrying 176 passengers crashed near Imam Khomeini airport in the Iranian capital Tehran early in the morning on January 8, 2020, killing everyone on board. (AFP)

Amid speculation that accident was linked to missile barrage, Tehran officials insist engine trouble was the cause, but Boeing says 737 was in good condition with experienced crew

(SOURCE)   Iran is refusing to hand over for analysis the black boxes from a Ukrainian airliner that crashed near Tehran to the plane’s manufacturer Boeing, Iranian media said Wednesday.

The crash, whose cause is still unclear, came shortly after an Iranian missile barrage on US forces in Iraq.

“We will not give the black boxes to the manufacturer (Boeing) and the Americans,” Iran Civil Aviation Organization head Ali Abedzadeh was quoted by the Mehr News Agency as saying.

The Boeing 737 plane took off from Tehran’s Imam Khomeini International Airport at 6:10 a.m., climbed to 2,400 meters (7,900 feet), then disappeared from the radars and slammed into a field at Khalaj Abad, about 45 kilometers (30 miles) northwest of Tehran.

There were no survivors among the 176 crew and passengers, who were mostly Iranian and Canadian nationals, according to Ukraine’s foreign ministry. 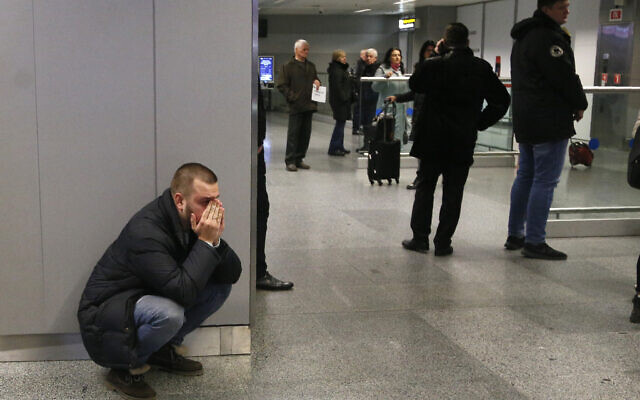 A relative of a flight attendant who was on board a Ukrainian 737-800 plane that crashed on the outskirts of Tehran, Iran, reacts at Borispil international airport outside Kyiv, Ukraine, January 8, 2020 (AP Photo/Efrem Lukatsky)

“The two black boxes of the Ukranian 737 aeroplane that crashed this morning have been found,” said the civil aviation authority’s spokesman, Reza Jafarzadeh, according to semi-official news agency ISNA.

Preliminary statements by Iranian and Ukrainian authorities suggested the plane had suffered an engine malfunction, with an Iranian official claiming the engine had burst into flames.

A statement initially posted on the website of the Ukrainian embassy also said the crash was caused by an engine malfunction and ruled out an act of terror, but that statement was later changed to say all information would be provided later by an official commission.

The airline, however, noted the plane was relatively new, in good condition, and had an experienced crew. 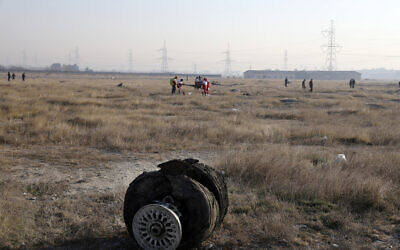 Debris is seen from an Ukrainian plane which crashed as rescue workers search the scene in Shahedshahr, southwest of the capital Tehran, Iran, January 8, 2020. (Ebrahim Noroozi/AP)

Ukraine International Airlines, the country’s biggest airline, said it had “decided to suspend its flights to Tehran starting today” and until further notice.

The airline’s representatives insisted the aircraft was fully functional under experienced pilots trained for emergencies at what they said was the “difficult” Tehran airport.

“The plane was in working order,” said UIA president Yevgeniy Dykhne. “It was one of our best planes, with a wonderful crew,” Dykhne told a briefing in Kyiv, choking back tears.

The airline said the plane had been built in 2016 and was checked only two days before it went down.

“[Chances] of a crew error are minimal, we simply are not considering them,” said airline vice president Igor Sosnovsky. “Considering their experience, it’s difficult to say that there was something wrong with the crew.”

Dykhne declined to comment on speculation linking the crash to Iran’s missile strike on US forces early Wednesday, advising reliance on official sources for information rather than social networks. 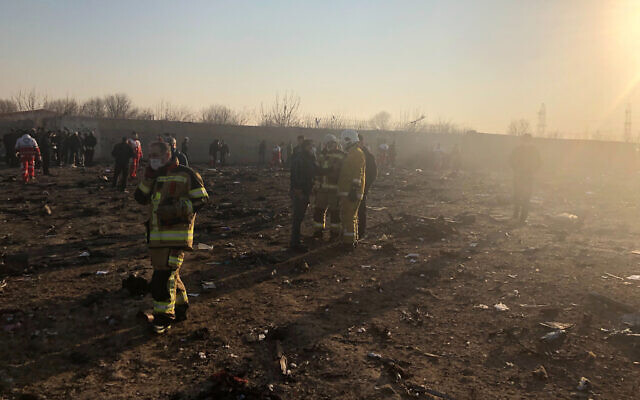 Debris is seen from a plane crash on the outskirts of Tehran, Iran, January 8, 2020 (AP Photos/Mohammad Nasiri)

Asked to say if the engine could have caught fire, Dykhne also said he would not engage in “hypotheticals” and would only give official information.

The airline was notifying passengers’ families and working with aviation authorities “to do everything possible to find the reasons for the aviation accident.”

Ukraine’s president ordered an investigation into the crash and a sweeping check of “all civilian aircraft” in the country.

Following the missile barrage, the US Federal Aviation Administration said it was banning US-registered carriers from flying over Iraq, Iran and the Gulf.

Other international carriers said they were suspending all routes passing through Iraqi or Iranian airspace.