Illustrative: French President Emmanuel Macron looks at a grave vandalized with a swastika during a visit at the Jewish cemetery in Quatzenheim, on February 19, 2019, on the day of nationwide marches against a rise in anti-Semitic attacks. (Frederick Florin/Pool/AFP)

A global poll of 9,000 adults in 18 countries shows significant numbers believe age-old tropes about Jews, including that they seek world domination

(SOURCE)    Roughly one in four Europeans harbors strongly negative attitudes toward Jews, according to a worldwide 2019 poll on anti-Semitism commissioned by the Anti-Defamation League.

While the report reflects little change in Western Europe, respondents from countries in Central and Eastern Europe showed a marked increase in anti-Semitic beliefs, with age-old stereotypes about Jews controlling business and finance, and being more loyal to Israel than their home country, still firmly entrenched.

The survey, which drew on 11 questions the ADL has used in global polling since 1964, queried over 9,000 adults in 18 countries in Europe, Canada, South Africa, Argentina, and Brazil between April and June of this year. It found that anti-Semitic attitudes have risen sharply in a number of countries: Argentina saw a 6 percent increase, Poland 11%, Russia 8%, Brazil and South Africa 9%, and Ukraine 14% since the last such survey, which took place in 2014 and was updated in 2015.

Roughly 25% of Europeans gave anti-Semitic responses to a majority of the 11 questions, putting them in the ADL’s highest category for anti-Semitism. In addition to negative attitudes toward Jews, when gauging overall anti-Semitism the organization takes into account factors such as violent, verbal, and destructive anti-Semitic incidents, self-reporting on anti-Semitism by Jewish communities, and government policy.

“It is deeply concerning that approximately one in four Europeans harbor the types of anti-Semitic beliefs that have endured since before the Holocaust,” said ADL CEO Jonathan A. Greenblatt. “These findings serve as a powerful wake-up call that much work remains to be done to educate broad swaths of the populations in many of these countries to reject bigotry, in addition to addressing the pressing security needs where violent incidents are rising.”

The survey also found that political discourse can influence anti-Semitism. In Poland, where the topic of restitution of Holocaust-era property and a law on Holocaust speech have stirred controversy in recent years, nearly half of all respondents — 48% — presented a negative view of Jews, up from 37% in 2015. Almost three-quarters of those polled agreed that “Jews still talk too much about what happened to them in the Holocaust.” In response to the same question, the Netherlands registered 31%, the UK 18%, and Sweden 15%. 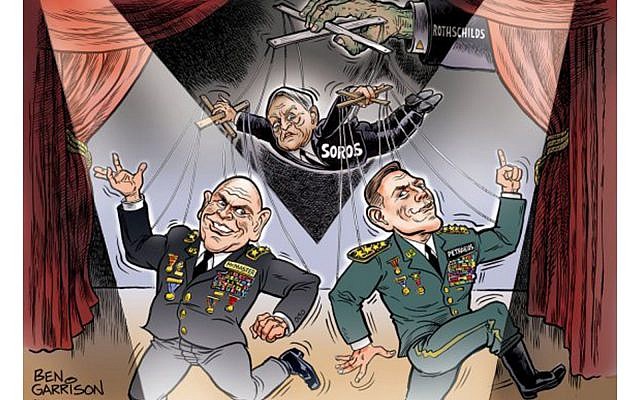 Illustrative: An anti-Semitic cartoon drawn by artist Ben Garrison depicting US government officials as puppets of George Soros and the Rothschilds. (Ben Garrison)

In Hungary, where government-sponsored anti-immigration campaigns have centered around Jewish billionaire George Soros, 25% of adults believe “Jews want to weaken our national culture by supporting more immigrants coming to our country.” Overall anti-Semitism in Hungary stands at 42%, compared to 40% in 2015.

Stereotypes regarding Jewish control of business and financial markets are extremely pervasive across the board, but are highest in countries in Central and Eastern Europe. Asked whether they agreed with the statement that “Jews have too much power in the business world,” 72% of Ukrainians answered in the affirmative, as did 71% of Hungarians, 56% of Poles, and 50% of Russians.

While European Muslims were substantially more prone to accepting anti-Semitic stereotypes — on average 300% more likely — than other European demographics in six countries tested (Belgium, France, Germany, Italy, Spain, and the UK), they averaged significantly less than respondents in the Middle East and North Africa regions in 2014. This may imply that exposure to Jews, Holocaust education, and social atmosphere have had an impact after respondents’ emigration.

Italy and Austria both boasted significant decreases in anti-Semitism, with an 11% drop in Italy along with 8% in Austria. Belgium, Germany, and Denmark remained largely unchanged, with averages of 24%, 15%, and 10%, respectively.