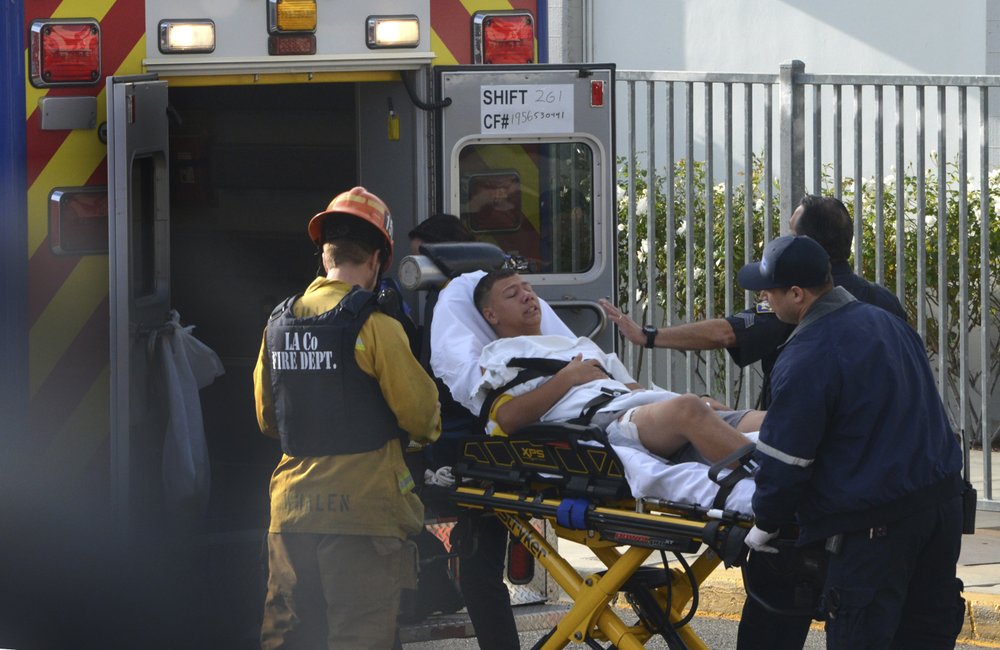 Medical personnel load an injured person into an ambulance outside Saugus High School in Santa Clarita, Calif., after a student gunman opened fire at the school on Thursday, Nov. 14, 2015. (Rick McClure via AP)

SANTA CLARITA, Calif. (AP) — A boy described as bright, quiet and “normal” pulled a gun from his backpack on his 16th birthday and opened fire at his high school before saving the last bullet for himself, authorities said.

The shooting that killed two teenagers and wounded three others Thursday at Saugus High School in a Los Angeles suburb took just 16 seconds and left the attacker hospitalized in critical condition with a head wound, authorities said.

Investigators searched the boy’s home as they sought a motive for the attack, which seemed to target students at random, Los Angeles County Sheriff’s Department Captain Kent Wegener said.

Someone posted a message under a pseudonym on an Instagram account that was reported as possibly belonging to the boy, authorities said. The message said: “Saugus, have fun at school tomorrow.”

“However, the account has yet to be authenticated,” a Sheriff’s Department statement said.

It wasn’t clear when the message was posted or by whom, Wegener said. It was deleted after the shootings, either by a hacker or someone who had access to the account, he added.

Authorities said the teenager apparently acted alone. There was no indication that he was affiliated with a group or ideology, said Paul Delacourt, the agent in charge of the FBI’s Los Angeles field office. 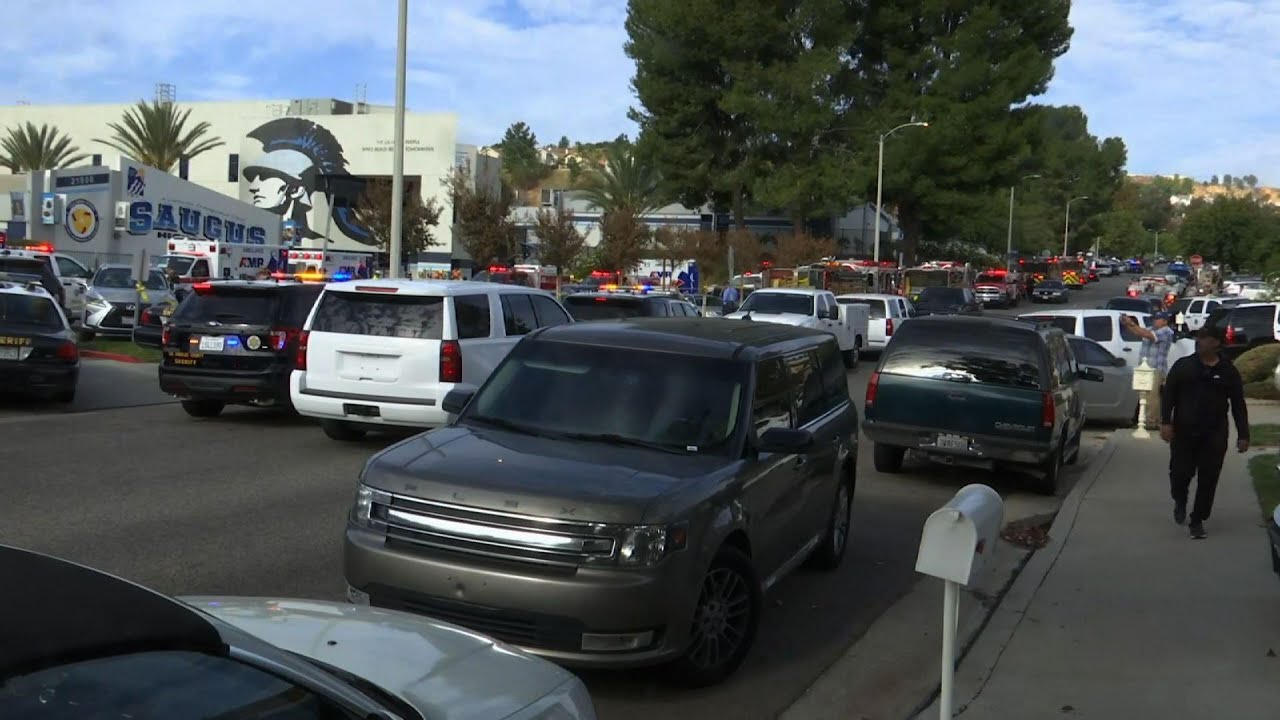 Gunfire erupted at about 7:30 a.m. as students were “milling around” and greeting each other in an outdoor quad area, Wegener said. Surveillance video showed the shooter standing still while “everyone is active around him.”

“He just fires from where he is. He doesn’t chase anybody. He doesn’t move,” Wegener said.

The suspect appeared to fire at whoever was in front of him. He had no known connection to those he shot, Wegener said.

Video showed the last thing the assailant did was shoot himself with the final bullet in the .45-caliber handgun, Wegener said. The weapon was empty when it was recovered.

Two girls, ages 14 and 15, were each in good condition after being treated for gunshot wounds at a hospital.

A 14-year-old boy was treated and released from another hospital, authorities said.

Shauna Orandi, 16, was in her Spanish class when she heard four gunshots and a student burst into the room saying he’d seen the shooter.

“My worst nightmare actually came true,” she said. “This is it. I’m gonna die.”

She was later escorted from the school and reunited with her father in a nearby park.

At a Thursday evening vigil, Lea Reas said her nephew, a 14-year-old freshman, saw his friend shot to death before he ran from the gunfire and was pulled into a room by a teacher.

“At first he thought it was a graze” but later was told his friend had died, she said.

Reas also said her 15-year-old cousin was walking onto the campus when she heard the gunshots that she said sounded “like a balloon” popping and saw the gunman.

She and her friends ran to a house across the street for safety, Reas said.

“It’s something no kid should deal with,” she said.

A sheriff’s detective and two off-duty police officers from Los Angeles and Inglewood who had dropped off children at the school ran to the shooting within moments and provided first aid, Los Angeles County Sheriff Alex Villanueva said.

Police have not publicly identified the suspect because he’s a minor. The Associated Press determined his identity based on property records for his home and interviews with three of his friends.

The boy lived with his mother in a modest home on a leafy street in Santa Clarita, a Los Angeles suburb of about 210,000 people known for good schools, safe streets and relatively affordable housing.

He was a smart, quiet boy who played chess and had been active in a local Boy Scout troop, acquaintances said.

He seemed like “one of those normal kids,” according to a student in his physics class.

One girl who knew him for years said he wasn’t bullied and had a girlfriend.

The teen’s father died two years ago. An online obituary said he loved big-game hunting. In 2015, the father had been arrested amid a domestic dispute with the boy’s mother but no charges were filed.

The Sheriff’s Department hadn’t been called to the home recently and there was no indication of “turmoil” there, Wegener said.

Saugus High has no metal detectors but it has a dozen security cameras and a fence with a limited number of gates.

All district schools hold lockdown drills three times a year, including two in the fall that have already occurred, Nielson said.

“In speaking with staff and hearing reports, students reported they knew what to do and immediately went into lockdown mode,” he said.