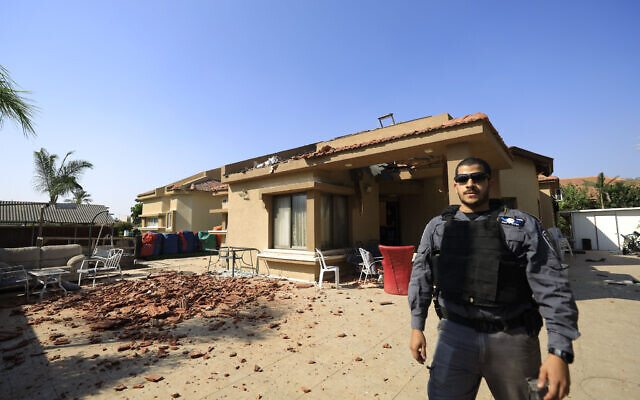 A policeman stands in front of a house hit by a rocket fired from Gaza Strip that landed in Netivot, Israel, November 12, 2019. (Tsafrir Abayov/AP)

(SOURCE)   The Israeli military on Wednesday conducted large-scale strikes against Palestinian Islamic Jihad sites in Gaza, including a major weapons manufacturing facility, as  terror groups continued firing regular barrages at southern Israel in response to the assassination of one of its senior commanders the day before.

The Israel Defense Forces said one of its aircraft also bombed a pair of PIJ members preparing to fire an anti-tank guided missile from the northern Gaza Strip. The use of anti-tank missiles — an expensive, highly accurate weapon — signifies a marked escalation by the terror group. 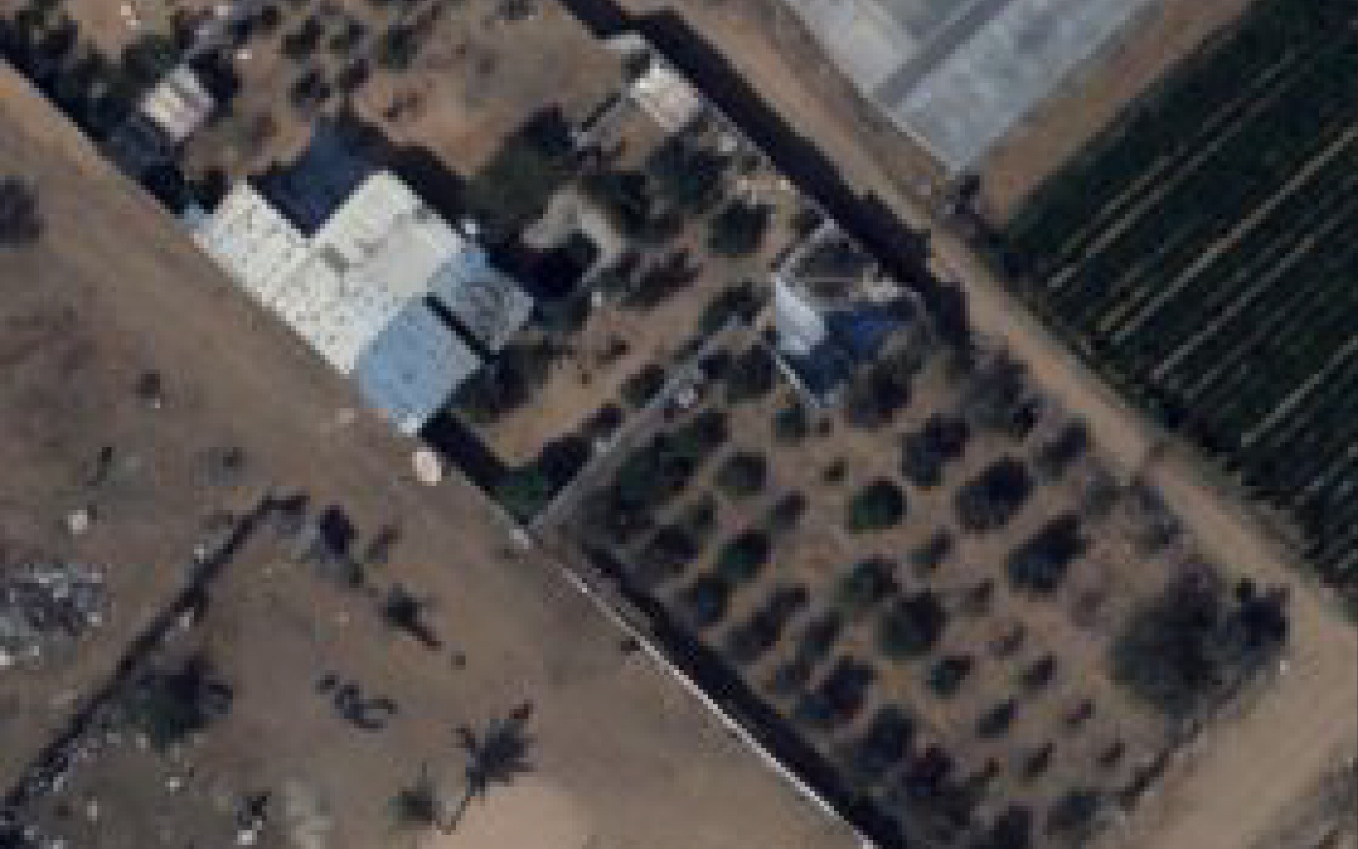 The IDF said that strike and others on the Islamic Jihad’s rocket facilities dealt the terror group a significant blow.

“The PIJ invests infrastructure and resources in its [rocket] production line, which is considered a key aspect in the organization’s abilities to rearm,” the military said. 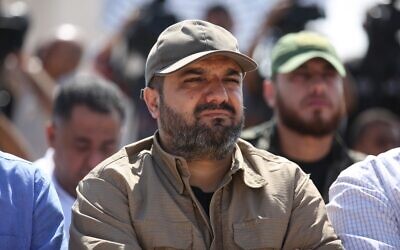 The IDF said its fighter jets and aircraft also bombed the headquarters of Islamic Jihad’s regional brigade in the city of Khan Younis and a cache of weaponry located inside the house of a PIJ operative, whom the IDF identified as Adam Abu Hadaid.

In addition, the Israeli Navy attacked several boats controlled by PIJ’s naval commando unit, as well as one of its training camps, which is also used to store weapons, the IDF said.

Since the start of the fighting, the Israeli military has carried out a number of strikes on terrorists who were preparing to launch rockets at Israel, killing several of them. 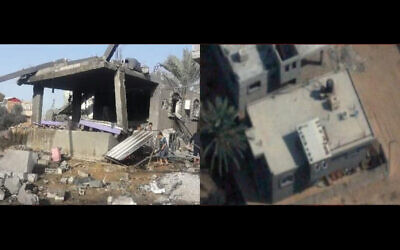 In total, at least 23 Palestinians in the Gaza Strip have been killed and 69 wounded since early Tuesday morning, the Hamas-run Gaza health ministry said.

PIJ and other terror groups in the Strip have publicly acknowledged that at least 12 of those killed were their members, though Israeli officials have indicated that the number is far higher. The Hamas-run health ministry in the Strip said three of the dead were children.

As of Wednesday afternoon, Islamic Jihad and other terror groups in the Gaza Strip had fired upwards of 250 rockets and mortar shells at southern and central Israel since the assassination of Baha Abu al-Ata in the predawn hours of Tuesday morning.

The attacks caused relatively few injuries but significant damage to property. According to the IDF, the Iron Dome air defense system intercepted the vast majority of the incoming projectiles heading toward populated areas — 90 percent as of Wednesday morning. 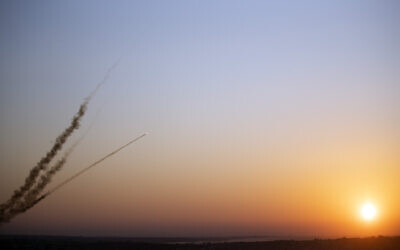 Rockets are launched from the Gaza Strip towards Israel, November 12, 2019. (Khalil Hamra/AP)

Renewed violence on Wednesday morning came as Islamic Jihad vowed to avenge the killing of Abu al-Ata. Senior Islamic Jihad officials on Tuesday evening said the “real response” to Abu al-Ata’s elimination had yet to come.

There was no statement from either side on a ceasefire, though Egyptian and UN officials on Tuesday night said were pushing for one.

Egyptian officials, who spoke on condition of anonymity, said Cairo was attempting to deescalate tensions between Israel and the terror groups. The officials added that the Egyptian General Intelligence Service stepped up communications and “opened channels” with the US and the European Union. 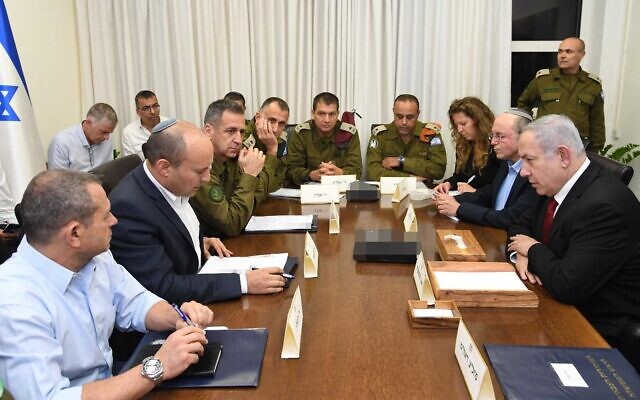 In the past year, both the Egyptian General Intelligence Services and UN Special Coordinator to the Middle East Peace Process Nickolay Mladenov have been involved in brokering unofficial ceasefires between Israel and the Gaza terror groups.

In the predawn hours of Tuesday morning, Israeli Air Force jets fired precision ammunition at a building in the Shejaiya area of Gaza City where Abu al-Ata was located, killing him and his wife, in a joint operation by the IDF and Shin Bet security service.

According to the IDF, Abu al-Ata was the true “senior commander” of the Islamic Jihad in the Gaza Strip, having ordered the group to carry out most of the significant rocket and border attacks from the Palestinian enclave in recent months and planning to carry out more. He was also identified by Israel as the primary obstacle to a long-term ceasefire agreement with Hamas and the other terror groups in the Strip. 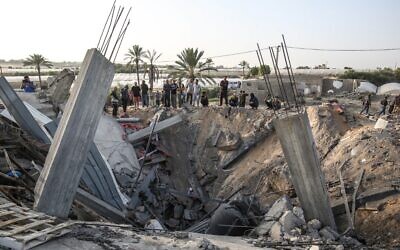 Palestinians gather around the remains of a house that the IDF says was used as a weapons cache controlled by the Palestinian Islamic Jihad, which was destroyed in an Israeli airstrike in Khan Yunis in the southern Gaza Strip November 13, 2019. (SAID KHATIB / AFP)

On Tuesday, the military said its fighter jets, helicopters and other aircraft carried out four rounds of airstrikes on Palestinian Islamic Jihad facilities, including “training compounds, including one used by PIJ’s naval commando unit, the shaft of an offensive terror tunnel in the northern Gaza Strip and a tunnel digging site in the central Gaza Strip,” as well as several underground facilities used to manufacture and store weapons, observation posts and training camps in three rounds of airstrikes.

These sites — specifically the underground ones — are seen as critical facilities for PIJ, which the terror group has invested large sums of money to construct.

Israel and Gaza have engaged in several sporadic rounds of violence over the last two years as the sides attempted to reach a long-term ceasefire.

Adam Rasgon and Times of Israel staff contributed to this report.