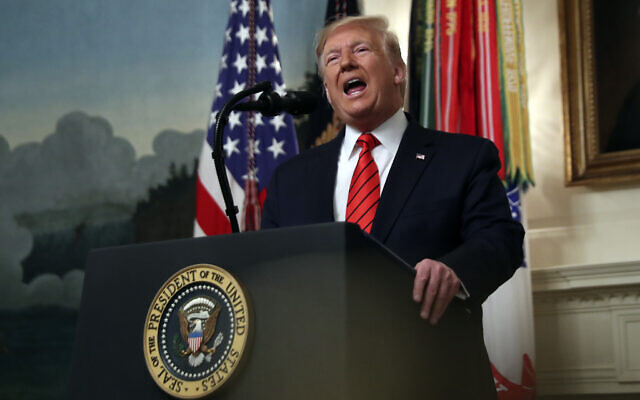 US President Donald Trump speaks in the Diplomatic Room of the White House in Washington, October 27, 2019. (AP Photo/Andrew Harnik)

US president confirms Abu Bakr al-Bahgdadi detonated suicide vest during raid, killing himself and three of his children

WASHINGTON (AFP) — US President Donald Trump on Sunday said that elusive Islamic State leader Abu Bakr al-Baghdadi was killed, dying “like a dog,” in a daring, nighttime raid by US special forces deep in northwest Syria.

Trump told the nation in a televised address from the White House that US forces killed a “large number” of Islamic State fighters during the raid which culminated in cornering Baghdadi in a tunnel, where he set off a suicide vest.

“He ignited his vest, killing himself,” Trump said.

“He died after running into a dead end tunnel, whimpering and crying and screaming all the way,” Trump said, adding that three of Baghdadi’s children also died in the blast.

Trump said that the raid — which required flying more than an hour by helicopter each way from an undisclosed base — had been accomplished with help from Russia, Syria, Turkey and Iraq.

Special forces “executed a dangerous and daring nighttime raid in northwestern Syria and accomplished their mission in grand style.”

At its height, Islamic State controlled swaths of Iraq and Syria in a self-declared state known as a caliphate, characterized by the brutal imposition of a puritanical version of Islam.

In addition to oppressing the people it governed, Islamic State planned or inspired terrorism attacks across Europe, while using expertise in social media to lure large numbers of foreign volunteers.

It took years of war, in which Islamic State became notorious for mass executions and sickening hostage murders, before the group’s final slice of territory in Syria was seized this March.

The death of Baghdadi comes as a big boost for Trump, whose abrupt decision to withdraw a small but effective deployment of US forces from Syria caused fears that it would give Islamic State remnants and sleeper cells a chance to regroup.

Trump took a storm of criticism, including from his own usually loyal Republican Party. 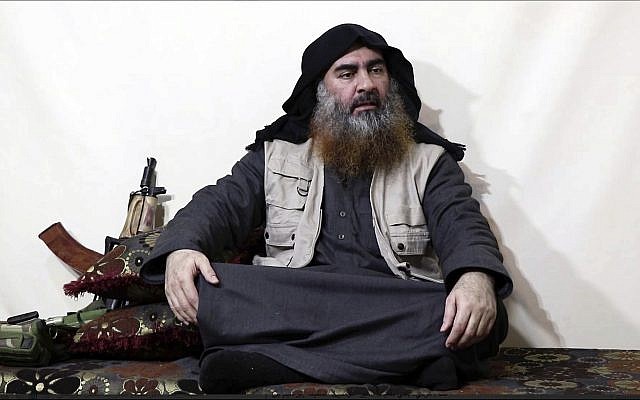 This image made from video posted on a militant website on April 29, 2019, purports to show the leader of the Islamic State group, Abu Bakr al-Baghdadi, being interviewed by his group’s Al-Furqan media outlet. (Al-Furqan media via AP)

In keeping with his liking for showmanship, Trump had teased the news late Saturday with an enigmatic tweet saying merely that “Something very big has just happened!”

A war monitor said US helicopters dropped forces in an area of Syria’s Idlib province where “groups linked to the Islamic State group” were present.

The helicopters targeted a home and a car outside the village of Barisha in Idlib province, said the Syrian Observatory for Human Rights, which is based in Britain but relies on a network of sources inside Syria for its information.

The operation killed nine people including an IS senior leader called Abu Yamaan as well as a child and two women, it said.

An AFP correspondent outside Barisha saw a minibus scorched to cinders by the side of the road, and windows shattered in a neighbor’s house surrounded by red agricultural land dotted with olive trees.

A resident in the area who gave his name as Abdel Hameed said he rushed to the place of the attack after he heard helicopters, gunfire and strikes in the night.

“The home had collapsed and next to it there was a destroyed tent and vehicle. There were two people killed inside” the car, he said.

From the outskirts of Barisha, an inhabitant of a camp for the displaced also heard helicopters followed by what he described as US-led coalition airstrikes.

Another resident, who gave his name as Abu Ahmad and lives less than 100 meters away from the site of the destroyed house, said he heard voices “speaking a foreign language” during the raid.

The AFP correspondent said the area of the nighttime operation had been cordoned off by Hayat Tahrir al-Sham, a group dominated by members of Syria’s former al-Qaeda affiliate controlling Idlib.

Between the trees, bulldozers could be seen at the site, clearing out the rubble.

Turkey, which has been waging an offensive against the US-backed Syrian Democratic Forces (SDF) in northeast Syria in recent weeks, had “advance knowledge” about the raid, a senior Turkish official said.

“To the best of my knowledge, Abu Bakr al-Baghdadi arrived at this location 48 hours prior to the raid,” the official told AFP.

The commander-in-chief of the SDF, which has been fighting IS in Syria, said the operation came after “joint intelligence work” with American forces.

Trump also said that Iraq had been “very good” over the raid.

He said no US soldiers were wounded, despite “doing a lot of shooting” and “a lot of blasting.” The only US casualty was an injured military dog in the tunnel with the trapped Islamic State leader.

Long pursued by the US-led coalition against IS, Baghdadi has been erroneously reported dead several times in recent years.

Baghdadi — an Iraqi native believed to be around 48 years old — was rarely seen.

After 2014 he disappeared from sight, only surfacing in a video in April with a wiry gray and red beard and an assault rifle at his side, as he encouraged followers to “take revenge” after the group’s territorial defeat.

His reappearance was seen as a reassertion of his leadership of a group that — despite its March defeat — has spread from the Middle East to Asia and Africa and claimed several deadly attacks in Europe.

The US State Department had posted a $25 million reward for information on his whereabouts.

In September, the group released an audio message said to be from Baghdadi praising the operations of IS affiliates in other regions.

It also called on scattered IS fighters to regroup and try to free thousands of their comrades held in jails and camps by the SDF in northeastern Syria.