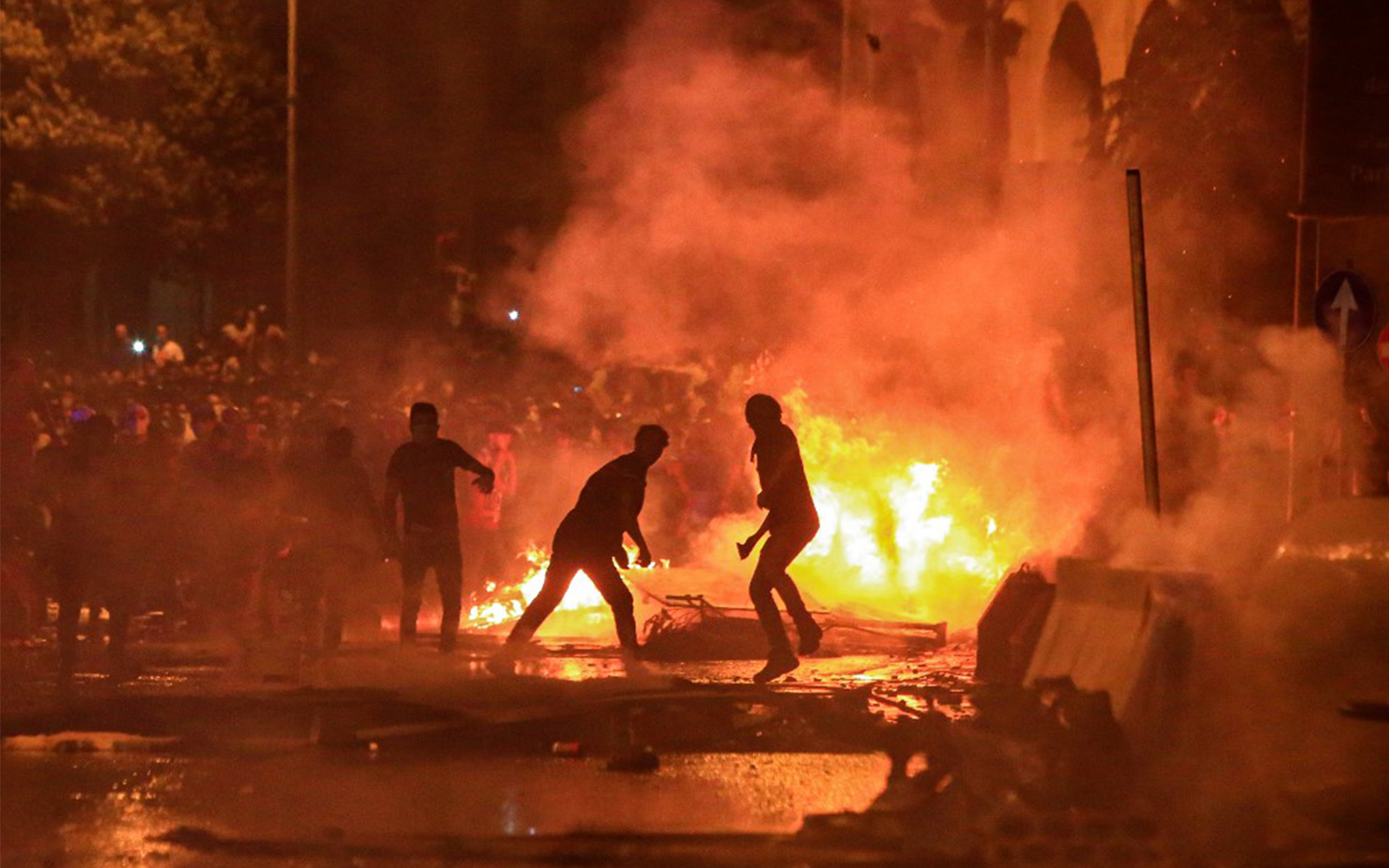 Lebanese demonstrators stand by a fire a make-shift barricade amid clashes with security forces during a mass protest at Riad al-Solh Square in Beirut on October 18, 2019. (STR/AFP)

BEIRUT, Lebanon (AFP) — Lebanon’s premier Saad Hariri on Friday gave his government three days to back key reforms, as massive protests against the political elite and austerity measures rocked the country for a second day.

“I’m setting a very short deadline” of 72 hours, Hariri said in a televised address, as thousands filled the streets of central Beirut.

“Either our partners in the coalition government give a clear, decisive and final response to convince me, the Lebanese people and the international community… that everyone has decided on reforms, stopping waste and corruption, or I will have something else to say,” he added.

Lebanon, which has one of the world’s highest debt to gross domestic product ratios, passed an austerity budget in July.

Tempers boiled over Thursday over plans to introduce a $0.20 tax on calls on messaging applications such as WhatsApp, though it was then scrapped in response to the protests.

On Friday thousands of protesters outraged by corruption and proposed tax hikes burned tires and blocked major highways in Lebanon as the largest demonstrations in years threatened the country’s fragile coalition government.

“The anger is certainly caused by living conditions, but it also stems from political behavior,” Hariri said. 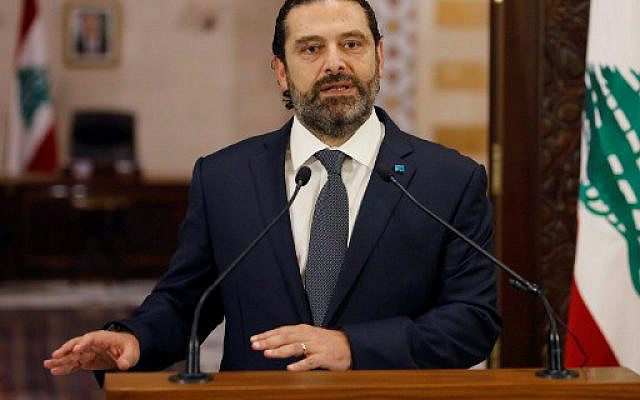 Hariri said he had spent years trying to find “real solutions” to problems ailing the country before the protests erupted.

“For months we have been waiting for our partners in the country and the government to go forward with the solution that we decided on… but there is no procrastination they haven’t tried,” he said.

Growth in Lebanon has plummeted in the face of repeated political deadlock in recent years, compounded by the impact of eight years of war in neighboring Syria.

Last year, Hariri struggled for more than eight months to form a cabinet.

Demonstrators had taken to the streets on Thursday evening, calling for an overhaul of Lebanon’s sectarian political system and voicing contempt for their leaders.

Thousands of people of all ages, sects and political affiliations brought the capital Beirut to a standstill Friday, as well as gathering in other parts of the country.

Foreign Minister Gebran Bassil, one of the most polarizing figures in Lebanon’s leadership, made an address insisting that the government’s resignation could lead to “something much worse than the current situation.”

Surrounded by smoke from burning tires, protesters flew the Lebanese flag and chanted “the people demand the fall of the regime!” — a popular refrain from the Arab Spring uprisings of 2011. 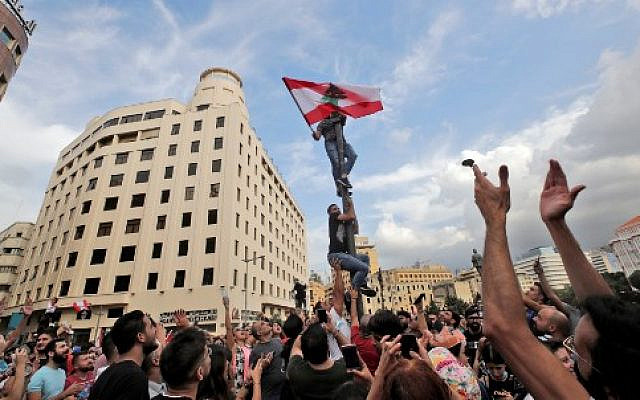 Lebanese demonstrators gather during a mass protest in the center of the capital Beirut on October 18, 2019 against dire economic conditions. (Anwar Amro/AFP)

Yara, a 23-year-old graduate, said she joined up because the protests were not sectarian.

“Today what matters is that all of the Lebanese people are protesting together.”

As dusk fell on the protests, riot police deployed en masse in central Beirut and readied for a second night of protests and rioting, an AFP correspondent said.

Lebanon, which was devastated by a 15-year civil war that ended in 1990, maintains a complicated political system based on balancing the influence of Christians, Sunni and Shia Muslims and other religious groups.

The current unity government is backed by politicians from across the political spectrum but has been hampered by a financial crisis.

Public anger has simmered since parliament passed an austerity budget in July to help trim a ballooning deficit.

Tempers boiled over Thursday over plans to introduce a $0.20 tax on calls on messaging applications such as WhatsApp, which are widely used in Lebanon. 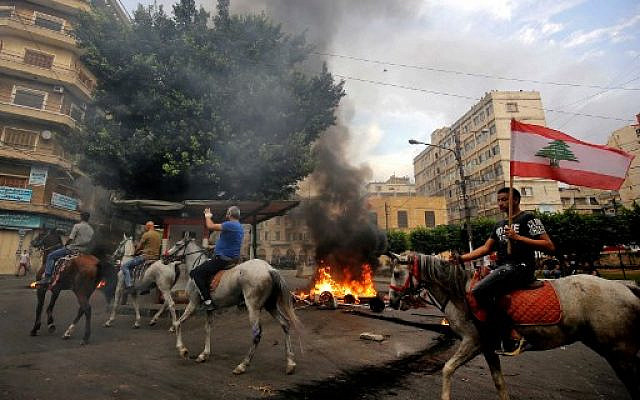 Lebanese protesters ride horses past burning tires in front of the house of former sports minister Faisal Karami, during a protest against dire economic conditions in the coastal city of Tripoli to the north of Beirut, Lebanon on October 18, 2019. (Ibrahim Chalhoubi/AFP)

The government scrapped the proposal within hours but the demonstrations carried on into the early hours of Friday.

Security forces finally dispersed them shortly before dawn, firing volleys of tear gas and rubber bullets after they had tried to storm government headquarters.

So far at least 23 protesters have been injured, according to the Red Cross, along with 60 security force personnel, according to police.

Banks, state institutions, schools and universities were closed Friday as the demonstrations spread throughout the country.

South of Beirut, travelers trying to catch their flights had to leave their luggage behind to reach the airport by hitching rides on scooters and clambering over roadblocks.

In a sign of the scale of the popular anger, demonstrations were reported in neighborhoods dominated by Hezbollah, a Shiite Muslim terror group not used to opposition in its own bastions. 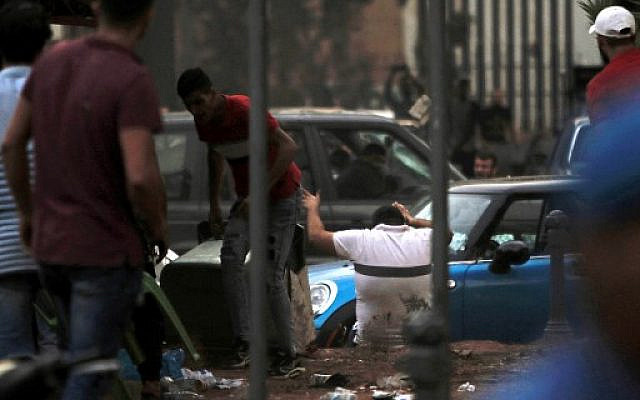 Sami Nader, director of the Levant Institute for Strategic Affairs think tank, said the protests were “totally spontaneous” and appeared to be against the entire political class.

“The protests are a result of a piling up of grievances, resulting mainly from government mismanagement,” he said.

They are the largest demonstrations since a 2015 refuse collection crisis sparked widespread anti-government protests.

“I want the streets to be lit. I don’t want to hear any more generators,” Dima Abu Hassan, 42, said. “Start there — at least some infrastructure.”

The government has also come under heavy criticism over its response to forest fires this month.

In a country with one of the world’s highest debt burdens, the government is weighing a raft of belt-tightening measures it hopes will shore up finances and secure $11 billion in aid pledged by international donors last year.

It is expected to announce a series of new taxes as part of next year’s budget, which is currently being drawn up by ministers. 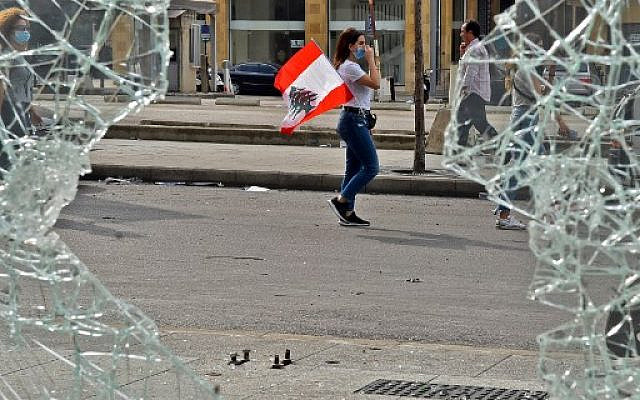 A masked woman walks with a Lebanese national flag tucked into her pocket past a broken window along a street in the center of the capital Beirut on October 18, 2019 amidst ongoing protests against dire economic conditions. (AFP)

The demonstrations come at a time of deep divisions within the government over a raft of issues, including not only the economic reform package, but also the allocation of public sector positions and rapprochement with the resurgent Syrian government.

Growth in Lebanon has plummeted in the face of repeated political deadlock in recent years, compounded by the impact of eight years of war in neighboring Syria.

“Most high-frequency indicators point towards a continuation of weak growth in 2019,” the International Monetary Fund said Thursday.