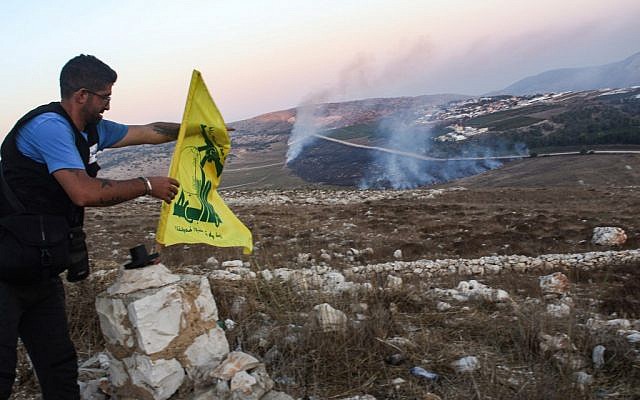 A man fixes a Hezbollah flag at the ‘Garden of Iran’ Park in the Lebanese village of Maroun al-Ras on September 1, 2019, as fires blaze on the Lebanese side along the border following an exchange of fire with Israel. (Mahmoud Zayyat/AFP)

(SOURCE)    The last few days were tense but Israel achieved all its goals, Prime Minister Benjamin Netanyahu said Tuesday, following a flareup at the northern border that started with a Sunday rocket attack by the Hezbollah terrorist organization.

Netanyahu also announced plans to hold another tripartite meeting with senior officials from Israel, the US and Russia, to be held in Jerusalem, to discuss Iran’s military presence in Syria.

“We had a few tense days on many fronts. We could have opened this week totally differently, but we acted with a combination of assertiveness and sound judgement, and achieved all our objectives,” he told his ministers at the weekly cabinet meeting in Jerusalem.

On Sunday afternoon, Hezbollah fired an anti-tank missile at Israeli military vehicles. No one was hurt, and Israel responded by attacking Hezbollah targets in southern Lebanon. The tit-for-tat had the potential to escalate as both sides vowed not tolerate fire by the other side, but a tense calm returned to the north Monday. 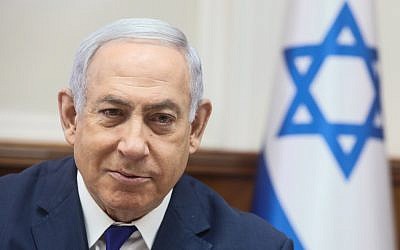 Netanyahu praised two senior Gulf officials for appearing to condemn Hezbollah and back Israel’s right to respond to Sunday’s attack.

“I welcome the statements of the foreign ministers of Bahrain and the United [Arab] Emirates against Hezbollah’s aggression,” he said, noting that they condemned the group for attacking Israel from Lebanese territory.

“This might sound like the ‘end of days,’ but it shows the principled change that is taking place in the Middle East. Also the Arab world understand that the Iranian aggression doesn’t only endanger Israel but the entire region.”

Bahraini Foreign Minister Khalid bin Ahmed Al Khalifa, who has previously expressed support for Israel’s right to self defense and has met publicly with Israeli officials, had criticized the Lebanese government for allowing the Hezbollah attack to take place.

“A state standing by, watching battles taking place on its borders and putting its people at risk, is a state that greatly neglects its responsibilities,” he wrote on Twitter.

United Arab Emirates Minister of State for Foreign Affairs Anwar Gargash also tweeted: “Our hearts are with Lebanon and the Lebanese people this evening,” noting that they always suffer from “decisions taken by a single player and the consequences,” in an oblique criticism of Hezbollah. 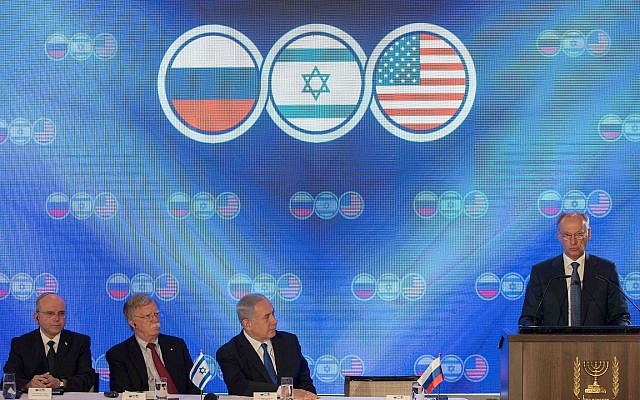 Addressing his ministers Tuesday, Netanyahu said that preparations for a second trilateral meeting between Israel, the US and Russia were currently ongoing, “to continue discussing removing Iran from Syria.”

Russia, which maintains close ties to both Israel and Iran, is seen as a potential interlocutor between the West and Tehran. But Patrushev at the time indicated that Moscow was siding with the Islamic Republic, rejecting the view that the regime represents “the main threat to regional security” and asserting that Israeli airstrikes in Syria against Iranian forces and its proxies were “undesirable.”

A spokesperson for the Russian Embassy in Tel Aviv on Tuesday did not confirm that another tripartite summit was imminent.

“After the trilateral meeting in Jerusalem the format was acknowledged as a very useful one,” the spokesperson told The Times of Israel. Certain agreements were reached, and follow-up meetings in the same format “are possible after fulfilling the previous agreements,” he said, refusing to elaborate.

Netanyahu on Tuesday also said he ordered the security establishment to focus on three main priorities: thwarting Iran’s nuclear ambitions; preventing the Islamic Republic from providing its proxies, including Hezbollah, with sophisticated weapons; and stopping Tehran and its proxies from establishing military bases on near Israel’s borders.

3 thoughts on “Netanyahu on flareup with Hezbollah: It was tense, but we achieved all our goals”