As gun violence increases the push for stricter gun control measures and confiscation of guns from law abiding citizens escalates!

It all sounds good from one viewpoint, if people are being murdered by guns then get rid of the guns!  Doesn’t it sound logical?  If guns are not available then people won’t have them to commit horrific crimes using them, right?!

However, is this truly the case, and is the true agenda of those pushing hard for the confiscation of our guns?!

The following are recent articles which represent the Leftist agenda to impose strict gun control laws which will eventually lead to taking away the rights of American citizens to own and bear arms, but also our firearms as well!  This is very scary stuff if you ask me!!! March for Our Lives, the gun control group started by Parkland survivors, announced an ambitious series of proposals that would radically change the landscape of firearm regulations, aiming to reduce gun ownership and gun-related deaths.

The plan announced on Wednesday seeks to reduce gun deaths by 200,000 (or 50 percent) over 10 years, install an apparent czar for gun violence, create a “Peace Corps for gun violence prevention,” and lower the nation’s firearm stock by 30 percent through a mandatory buyback program, according to the group.

March For Our Lives Calls for Confiscating Guns, Investigating the NRA, and ‘Reforming’ the Supreme Court 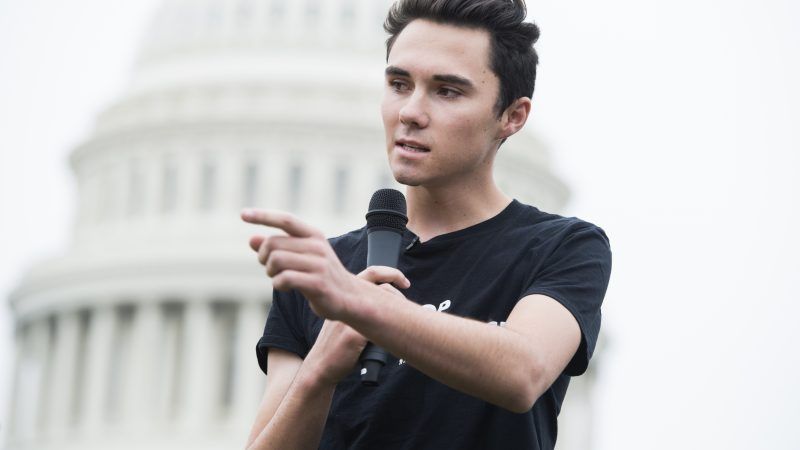 March For Our Lives wants sweeping gun control, and a lot of other things too. On Wednesday, the group released its Peace Plan for a Safer America with the ambitious goal of reducing gun deaths and injuries by 50 percent in 10 years.

“You see these shootings on TV every day and very little happening around it. It’s painful to watch,” David Hogg, a survivor of the 2018 Parkland shooting and co-founder of March For Our Lives, told the Washington Post. “I think that this plan is something that we can truly—as a country and as Americans united against violence and fighting for peace—can get behind.”

The plan Hogg expects the country to get behind includes radical changes to America’s gun laws, the federal government, and the U.S. Constitution itself. It would start by creating a national gun licensing system.

This is a Leftist agenda my friends, an agenda to control the population and the masses!  This is one of the first steps in total control of a large population of people, disarm them first!!!

What was one of the main reasons for our forefathers to include the right for citizens to own and bear arms?  It was in order for the citizens to stand against a tyrannical form of government like the one they just fought against!  And those on the Left know this, therefore they seek to not only strip American citizens of their weapons but to actually change the meaning of the Bill of Rights given to us by the founders of this nation in order for us to protect ourselves from government officials like themselves!

They want to take away our ability to defend ourselves, they know that they cannot take away our weapons right away, so they work at it bit by bit, piece by piece, an inch at a time, first off by trying to scare people about guns, then by imposing stricter gun control laws, then by taking our guns away!  They know that if they impose stricter laws then many law abiding citizens will abide by the laws, however in doing so they will actually turn many other law abiding citizens into criminals!

The Left has brainwashed and manipulated the younger generation into believing many lies and untruths, into believing that it’s the guns that are killing people and not people killing people!  They lead them to believe that if we take away everyone’s guns and their rights to own guns then all will be well and we will live in a safe utopia!  Hogwash!!!  What a bunch of malarky!

First of all even if all of the law abiding citizens were stripped of their firearms the criminals would still have their guns!  What’s to keep criminals from owning and bearing arms?!  Could you imagine what would happen if law abiding citizens didn’t own and bear arms?  It would be open season on the law abiding citizens!  Second, the world is a wicked and evil place and getting worse by the day, it doesn’t matter if people own guns or not, there is always a way to commit heinous crimes and to kill people, with or without guns!  If people are brainwashed into believing that taking away guns from law abiding citizens will make America safe then they are gravely mistaken.

A government which disarms it’s citizens is the same government that will control and dominate the very same people.  This is the plan of the Left, to control, to dominate, to join forces with the shadow government in order to usher in a One World Government led by a One World Ruler, the Antichrist!

America is one of the major obstacles in the formation of a One World Government, but that is only because Donald Trump was elected as president of the United States.  President Trump will not be president forever, and he may not win the next election, once a Leftist candidate takes control of the Oval Office then all hell will literally break loose!  Another major obstacle in ushering in a One World Government is the Conservative Right, many of whom are born-again believers in Jesus Christ!  The Shadow Government or Deep State knows that it cannot accomplish it’s mission with these people having any form of control, so they must be silenced.  One way to take away their control is to take away their ability to defend themselves, take away their rights to own and bear arms, take away their guns!

This may all sound far-fetched, but believe me when I say that all of these things are true, that there is a Shadow Government with a sinister plan to usher in a One World Government, a government behind the wings which is evil in nature, a government which in fact worships Satan!  There is a group of Elite people who are in allegiance to Satan, a group that is satanic and demonic in nature, and they are all under the umbrella of the Illuminati, the same people pushing Leftist ideologies, pushing for Socialism in America, reinterpreting the Bill of Rights and pushing for the confiscation of guns from private citizens.  Hard to believe, sounds like a science fiction movie?  Perhaps, but it’s the truth!

So this is where we stand in the world today, a government behind the scenes controlling the masses, controlling world leaders.  But just when things were going their way Donald Trump steps in and messes things up for them!  President Trump has shook the status quo, he has given us a reprieve for just a short time, because the time is soon coming for the Left to take control, and when it does then their plans for a One World Government will be even closer to coming to fruition!  Did this reprieve come from Donald Trump or did it come from God Almighty?  I believe that it came from God, He was the one who placed Donald Trump in the White House, it was God who has given us a short time to stop and think, to repent of our sins, to turn back to Him before His wrath is poured out upon the world!

The Left will have a much easier time in fulfilling their plans once they are back in the White House, but, they still have born-again believers in Jesus Christ standing in their way!  This my friends is the biggest obstacle they have in forming a One World Government and in getting America to jump on board with their sinister plan, the Holy Spirit filled church.  But once the church is removed from the earth (aka “the rapture of the church”) things will move along without any hindrance whatsoever!

Once Christians are removed from the earth then those following Satan will have free reign to implement their plans, the world will become much, much darker than it is now and the son of perdition (the Antichrist) will confirm a covenant with many for one week, the Tribulation Period!

It’s coming my friends and I don’t believe that it’s too far away!  We are merely in a holding pattern, a brief reprieve, a temporary respite until the beginning of the Tribulation period and the time of God’s wrath is poured out upon a wicked world!

Why hasn’t Satan already confirmed a covenant with the Jews?  Why hasn’t the Tribulation period already begun?  I mean what is the trigger for the Antichrist to come on stage and sign a treaty?  Could it be that it’s the rapture of the church?!  Could it actually be that the Holy Spirit filled church of Jesus Christ is keeping Satan from revealing the Antichrist?!  Yes!  I absolutely believe that it is the only thing from keeping the Antichrist from coming on stage and being revealed, if not then it could have already happened.

When you see these things begin to happen then look up for your redemption draws near!