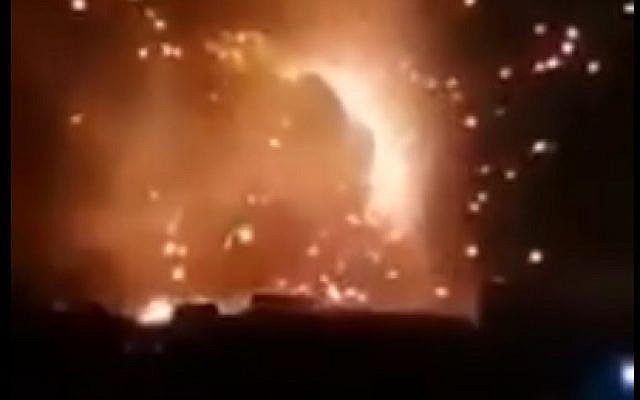 A still from a video purporting to show an Israeli strike on Iran-backed forces in Syria on August 24, 2019. (screen capture: Twitter)

(SOURCE)    Members of Israel’s top-level security cabinet warned Sunday morning that Iran should not feel safe “anywhere” after Israel took responsibility for an airstrike in Syria it said thwarted an Iranian plan to attack the Jewish state with explosive drones.
“We are taking responsibility for the attack in Syria and are saying that Iran should feel it is not safe anywhere,” Environmental Protection Minister Ze’ev Elkin told Channel 13 TV news.

“Iran is working day and night all over the Middle East in order to build an empire that has set for itself the goal of destroying Israel,” Elkin said.

Foreign Minister Israel Katz told the Kan public broadcast radio that Israel publicly took responsibility for the strike to demonstrate to Iran that it “has no immunity anywhere.”

He added: “The [Syria] action was intended to cut the head off the snake.”

As regional tensions simmered in the wake of the Syria airstrike, the Iran-backed Hezbollah terror group said Sunday that an armed Israeli drone exploded next to the group’s media headquarters, causing significant damage, and a second crashed in the Lebanese capital Beirut.

A Hezbollah official said one drone crashed and another one exploded near the ground, causing a fire in the Beirut neighborhood of Dahiyeh, a Hezbollah stronghold.

Iran’s Press TV quoted a Hezbollah official saying the two drones had been downed by the group.

Late Saturday night, the Israel Defense Forces made a rare announcement admitting it had carried out the attack in Syria against Iranian forces and Shiite militia members who been working on a plan to fly explosives laden drones into Israel.

The late-night airstrike, which triggered Syrian anti-aircraft fire, appeared to be one of the most intense attacks by Israeli forces on Iranian targets in Syria.

Lt. Col. Jonathan Conricus, a military spokesman, said forces had been put on high alert near the Syrian frontier after the attack.

“The IDF is prepared to continue defending the State of Israel against any attempts to harm it and holds Iran and the Syrian regime directly responsible for the thwarted attack,” the military said in a statement.

In a statement issued just minutes after the Israeli army announced its attack, Netanyahu hailed the military’s “major operational effort” in thwarting the attack planned by “the Iranian Quds force and Shiite militias.”

“Iran has no immunity anywhere,” Netanyahu said. “Our forces operate in every sector against the Iranian aggression.”

“I have directed that our forces be prepared for any scenario. We will continue to take determined and responsible action against Iran and its proxies for the security of Israel,” he added.

There was no immediate response from Iran following the Israeli attack. Syrian state media said it had shot down most of the Israeli missiles. Military analysts often accuse Syria of exaggerating the efficacy of its air defense systems, claiming to shoot down incoming missiles that in fact hit their targets. 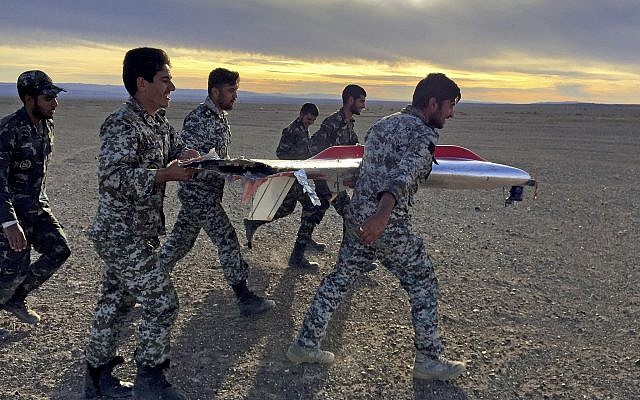 In this photo provided by the Iranian Army Monday, Nov. 5, 2018, soldiers carry the wreckage of a drone during drills in Semnan, Iran. (Iranian Army via AP)

There have been few direct clashes between Israel and Iran in Syria. In May 2018, Israel said Iranian forces fired some 20 rockets at Israel, with most being shot down or failing to reach Israeli territory. In response, Israel carried out extensive airstrikes on Iranian positions in Syria.

While Israel has acknowledged carrying out thousands of airstrikes inside Syria against weapons transfers to Iranian backed fighters and to keep Iran from gaining a foothold there, it rarely acknowledges individual strikes.

The ambiguity is part of a strategy seen as helping give Tehran and Damascus cover from needing to strike back to save face. Israel has appeared to apply the same strategy in Iraq, where the IDF has been reported to have carried out a number of strikes on Iran-backed militia positions near Baghdad.