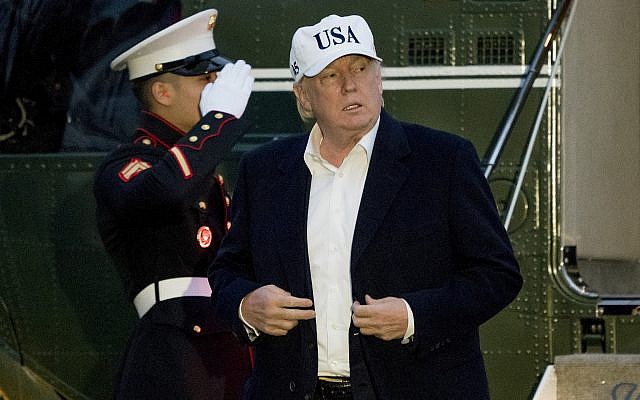 US President Donald Trump steps off Marine One on the South Lawn at the White House in Washington, December 17, 2017, after returning from Camp David in Maryland. (AP Photo/Andrew Harnik)

(SOURCE)    The United States is reportedly planning a conference with Arab leaders at Camp David, during which US President Donald Trump will roll out his plan for Israeli-Palestinian peace.

Invitations to the conference will be extended by Jared Kushner, Trump’s senior adviser and son-in-law, as he visits Israel and the Middle East this week to drum up support for the plan, the Yedioth Ahronoth daily reported Wednesday.

During the conference, which is set to be held before the general elections in Israel on September 17, Trump will outline the broad strokes of his plan without making any binding proposals, the newspaper said.

US officials have previously stated the plan would not be released until after the Israeli elections. 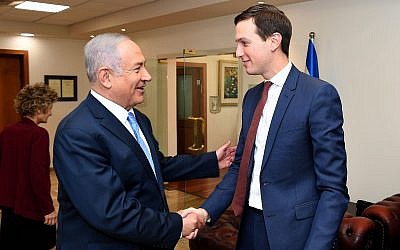 According to the report, Prime Minister Benjamin Netanyahu helped plan the meeting, which could be a boon to his reelection hopes.

Citing an unnamed US source, Yedioth said Netanyahu is not expected to be invited to Camp David, however, as his presence could deter Arab leaders from attending.

The report did not say which countries will receive an invite. Besides Israel, Kushner and the US peace team are set to travel to Egypt, Jordan, Qatar, Saudi Arabia, and the United Arab Emirates.

Such proposals would likely be rejected out of hand by Palestinian Authority President Mahmoud Abbas, who backs the establishment of an independent Palestinian state with its capital in East Jerusalem.

The US has so far kept the political elements of its plan under wraps, while the economic aspects of it were presented last month by Kushner at an American-led conference in Bahrain.

The Palestinians skipped the Bahrain conference and have rejected the peace plan outright, pressing on with their boycott of the administration since Trump recognized Jerusalem as Israel’s capital in December 2017 and cut Palestinian aid. 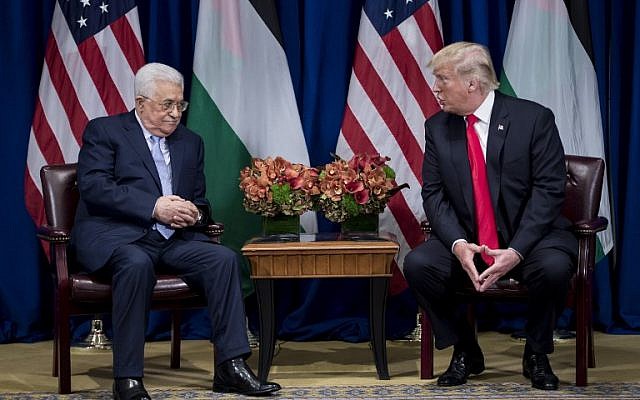 Palestinian Authority President Mahmoud Abbas listens while US President Donald Trump makes a statement for the press before a meeting at the Palace Hotel during the 72nd United Nations General Assembly on September 20, 2017, in New York. (AFP/Brendan Smialowski)

In his meetings with Arab leaders, Kushner will also tout Israel’s approval of a plan to grant 700 building permits to Palestinians in Israeli-controlled Area C of the West Bank, which the report said could help sell the US peace proposal.

The security cabinet, in approving those permits on Tuesday, also greenlighted 6,000 construction licenses for homes in neighboring settlements.

The approvals were praised by US Ambassador to Israel David Friedman, who in an interview with CNN said the administration’s plan seeks “Palestinian autonomy” and self-governance, but stopped short of endorsing the establishment of a Palestinian state.

Previewing Kushner’s trip, a US official said last week the purpose of it was to follow up on the Bahrain workshop.

“We would like to finalize the plan’s economic portion, including to discuss the potential placement of the investments,” the official said, referring to the $50 billion investment packaged for the Palestinians and the wider region proposed by the plan.

The delegation’s trip is to be understood as the conclusion of the first stage of the peace plan’s unveiling, but not yet as the overture to the presentation of the political part, the official stressed.