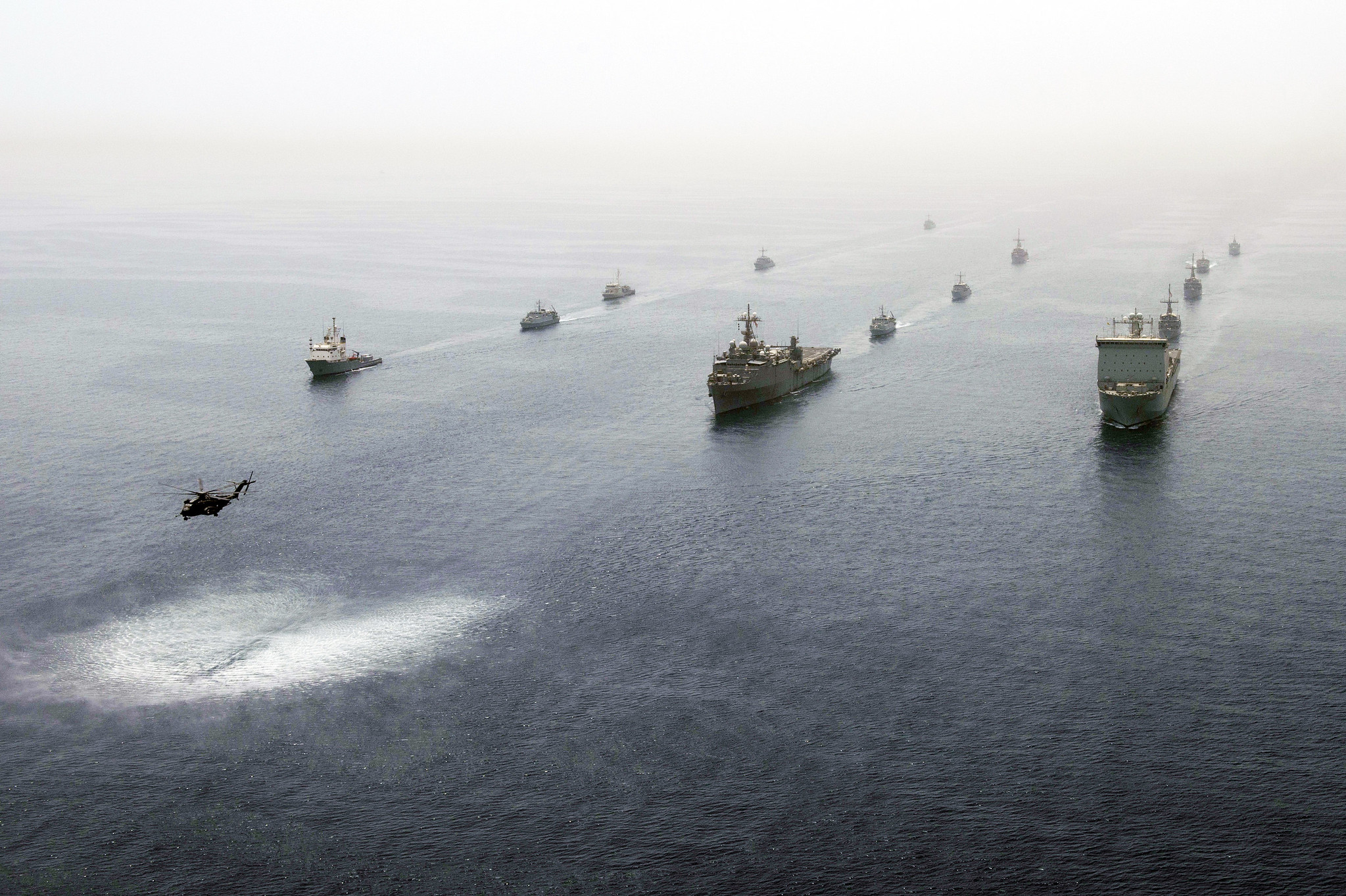 Multinational ship in formation in the Persian Gulf May 21, 2013, during an International Mine Countermeasures Exercise. (Michael Sandberg/US Navy)

WASHINGTON (AFP) — The Pentagon said Thursday it was discussing military escorts for vessels in the Gulf, one day after armed Iranian boats threatened a British oil tanker.

The White House’s nominee to become chairman of the Joint Chiefs of Staff, General Mark Milley, said Washington was attempting to put together a coalition “in terms of providing military escort, naval escort to commercial shipping,” he said.

“I think that that will be developing over the next couple weeks,” Milley told the Senate Armed Services Committee.

His statement came after London accused Tehran Thursday of deploying three military vessels to “impede the passage” of a 274-meter (899-foot) BP tanker, the British Heritage.

“We are concerned by this action and continue to urge the Iranian authorities to de-escalate the situation in the region,” a Downing Street spokesman said. 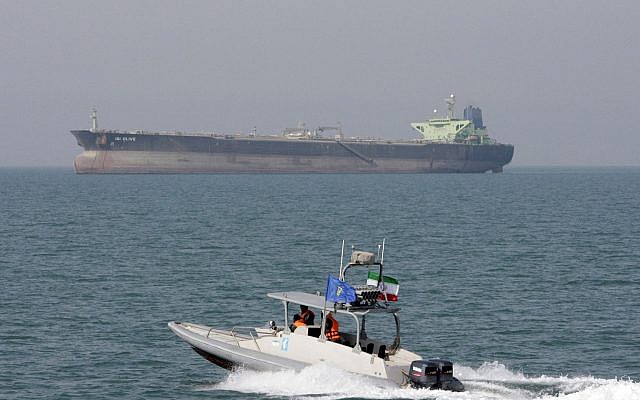 An Iranian Revolutionary Guard speedboat maneuvers in the Persian Gulf while an oil tanker is seen in background, July 2, 2012. (Vahid Salemi/AP)

Iran’s Revolutionary Guards denied involvement but also warned both the United States and Britain that they would “strongly regret” the British detention of a fully-loaded Iranian tanker off Gibraltar last week for allegedly violating sanctions on the Islamic Republic.

Officials in Britain and France would not confirm the discussions on a tanker escort operation, which comes amid heightened tensions in the Gulf after Iran was accused of using limpet mines to blow holes in ships in the Gulf area in May and June and US President Donald Trump came close to ordering an attack on Iran in retaliation.

The US, Britain and France all maintain a naval presence in the Gulf.

But both London and Paris have been reticent to join in Washington’s “maximum pressure” campaign against Iran to force it to pull back on its involvement in conflicts in Syria, Iraq and Yemen.

British media reported that the possible deployment of more Royal Navy ships to the region was “being looked at” in government meetings on Thursday in the aftermath of the newest incident.

But in France, a government official told AFP that they were not planning for the moment to expand their presence in the Gulf.

“France is on a course of deescalation,” the official said.

“Sending additional military assets to the region does not seem useful to us.” 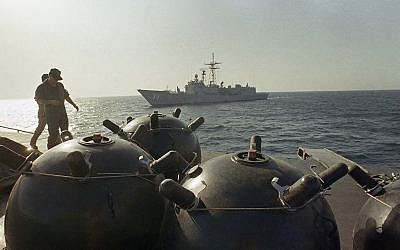 Mines aboard the ship Iran Ajr are inspected by a boarding party from the USS LaSalle in the Persian Gulf, Sept. 1987. (AP/Mark Duncan)

Earlier this week, General Joseph Dunford, the top US military officer, said the United States could lead any escort operation and provide surveillance as other countries protected tankers under their own flags.

The move would reprise the 1987-1988 US operation to protect Kuwaiti oil tankers from Iranian attacks during the Iran-Iraq war.

Up to 30 warships were deployed by Washington to the region, and five other governments joined in, including Britain and France.

Iran’s menacing of the BP supertanker on Wednesday appeared to be in retaliation for the British seizure of the Iranian tanker believed to carry crude for delivery to Syria.

British defense sources told media that the Revolutionary Guards boats attempted to first stop and then divert the supertanker towards the Iranian shore.

The HMS Montrose, a Royal Navy frigate, then trained its guns on the Iranian boats and delivered a “cease and desist” message by radio. 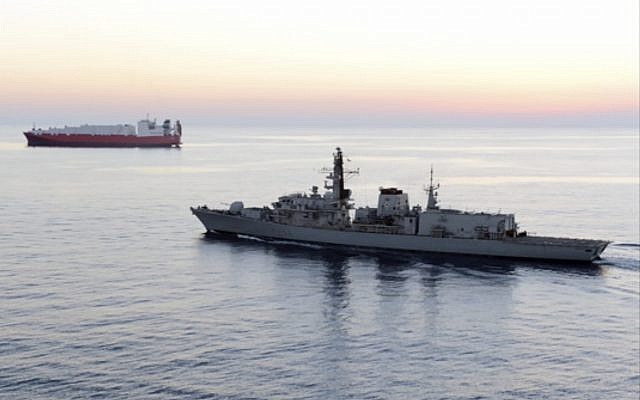 Vice Admiral Jim Malloy, commander of the US Fifth Fleet covering the Middle East, accused the Revolutionary Guards of “unlawful harassment” of the British vessel.

“We continue to work closely with the Royal Navy, along with all our regional and global partners who share in our commitment to preserving and defending the free flow of commerce and the freedom of navigation,” he said in a statement.

The Revolutionary Guards — a vast and powerful security organization that the United States blamed for the limpet mine attacks — denied threatening the British tanker. 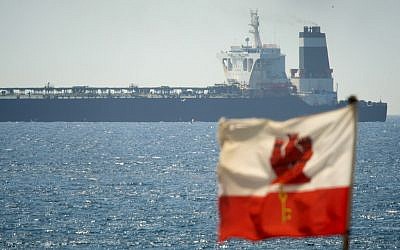 “There has been no confrontation in the last 24 hours with any foreign vessels,” the Revolutionary Guards said in a statement.

But, in a move that could add to the tensions, Gibraltar police announced the arrest on Thursday of both the Indian captain and officer of the seized tanker.

The rapid chain of events further complicates Britain and other European allies’ efforts to salvage the 2015 JCPOA nuclear agreement with Iran from which Washington pulled out more than a year ago.

With the US pressuring European allies to fall in line and enforce a strict embargo on Iran, Britain and other European nations have been trying to preserve the deal by setting up their own independent trade mechanism that evades US sanctions on Tehran. 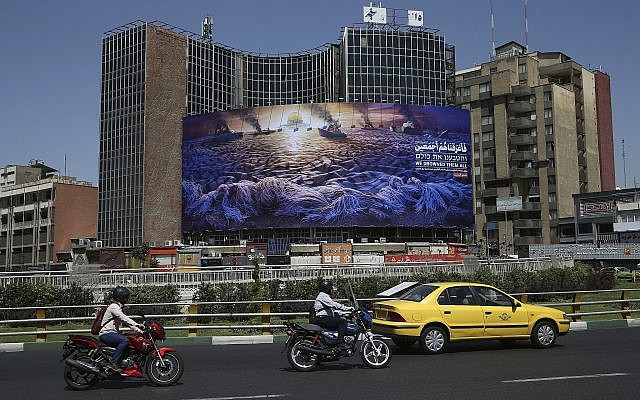 In this Wednesday, May 29, 2019 photo, People drive at Vali-e-Asr Square in downtown Tehran where an anti-Israeli billboard showing burning US and Israeli vessels is place ahead of the Al-Quds, Jerusalem, Day, Iran. (AP/Ebrahim Noroozi)

In recent weeks, Tehran has increased uranium enrichment in response, consciously breaking its own obligations under the JCPOA pact in hopes that it can counter Washington’s moves.

But that is putting the European strategy under strain.

European parties to the agreement issued a tough joint statement on Tuesday saying Iran must return to full compliance “without delay.”

Fellow deal sponsors Russia and China lay the blame for the confrontation on the United States.