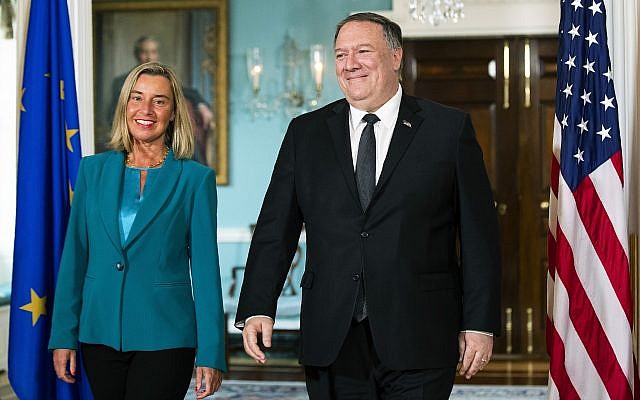 In Washington, Mogherini tells Pompeo the union views survival of Iran nuclear deal as ‘key to preserving stability and security in the region’

(SOURCE)    The European Union on Wednesday signaled willingness to cooperate with the US administration’s effort to broker an Israeli-Palestinian peace deal, as long as it includes a clear commitment to the two-state solution and other internationally endorsed parameters.

Federica Mogherini, the EU’s foreign policy czar, during a meeting in Washington Tuesday with Jared Kushner, a senior adviser to US President Donald Trump, “underlined the fundamental interest of the European Union for lasting and sustainable peace and stability in the region,” according to a readout of the meeting provided by Brussels.

“In this context, the EU is ready to work with the US administration on the basis of its longstanding position, including the commitment to a negotiated two-state solution and agreed international parameters.”

The EU’s position calls for the establishment of a Palestinian state in the West Bank and Gaza, with Jerusalem a capital of both Israel and Palestine.

The union will send a representative to next week’s economic peace conference in Bahrain, Mogherini said earlier this week, though it remains unclear at what level the EU will participate in the event, which is boycotted by the Palestinians.

Israeli officials were not invited because US officials did not, they said, want to politicize the event. However, a small number of Israeli businessmen and others are expected to be present at the so-called Peace to Prosperity workshop in Manama.

“We are considering the level of attendance that might be most likely a technical level. We are always interested in getting more insights on possible steps or plans that can be put forward,” Mogherini said Monday at a meeting of the EU-Jordan Association Council in Luxembourg.

“But I can tell you this casts no shadow whatsoever on the strong and clear European Union commitment shared by all member states on the need to have a political solution for the creation of a Palestinian state. As I said, living side by side with the Israeli state, with a clear status for Jerusalem, and with respect to the international parameters that are clearly known.”

The EU sending a representative at the “technical level” to the Bahrain workshop “does not infringe on any of these very clear commitments,” Mogherini stressed. Brussels “is and remains a strong supporter of the internationally agreed parameters for the solution of the Middle East peace process, no doubt on that,” she said.

In DC on Tuesday, Mogherini also met with US Secretary of State Mike Pompeo, discussing with him various international and regional developments, including the recent attacks on an oil tanker off the coast of Oman, the Western Balkans, Venezuela, Afghanistan, Libya, Moldova, Russia and Ukraine.

In what the EU described as a “positive and constructive conversation,” Mogherini stressed the union’s abiding commitment to the Iran nuclear deal “as key to preserving stability and security in the region and as an essential component of the global non-proliferation architecture.”

Last year, the US unilaterally quit the 2015 landmark pact between six powers and Iran, leading the Islamic Republic to vow to increase uranium enrichment by next week.