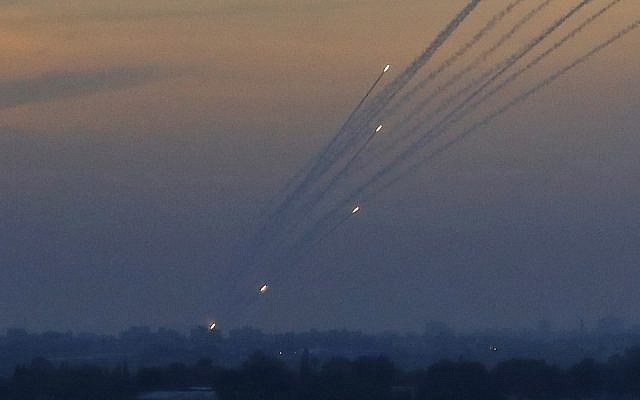 Illustrative. A picture taken on May 5, 2019 from the Israel-Gaza border shows a barrage of rockets being fired from the Hamas-run Palestinian enclave. (Jack Guez/AFP)

(SOURCE)   Israeli aircraft hit a Hamas underground facility in the Gaza Strip early Thursday after a rocket fired at southern Israel was shot down in the first such attack since Israel and terror groups in the coastal enclave fought a vicious two-day battle last month.

The Israel Defense Forces said its fighter jets bombed “underground terror infrastructure on a base belonging to the Hamas terror group in the southern Gaza Strip.”

The army said the strikes came in response to the rocket that was fired at Israel earlier in the night, noting that Israel holds the Gaza-ruling Hamas responsible for all violence emanating from the Strip.

Earlier in the night the Israeli military said it shot down a rocket from Gaza heading toward southern Israel shortly after midnight Wednesday.

The incoming projectile triggered sirens in the community of Nirim in the Eshkol region, east of Gaza, at approximately 12:15 a.m. on Thursday. Residents of the area reported hearing sounds of explosions.

“One launch was detected from the Gaza Strip toward Israeli territory. It was intercepted by Iron Dome soldiers,” the army said in a statement, referring to the air defense system.

Residents said the rocket caused no injuries or damage.

“There were no impacts inside a community. Searches are being conducted in the area,” an Eshkol spokesperson said in a statement.

The attack came hours after Israel announced it was imposing a full naval closure of the Gaza Strip, not allowing local fisherman access to the sea, in response to the wave of arson and explosive attacks from the coastal enclave throughout the day.

At least six fires in southern Israel were blamed on incendiary balloons launched from the Strip, and another balloon with a bomb attached to it exploded over an Israeli town. There were no reports of injuries. The arson attacks caused significant damage to area farmland. 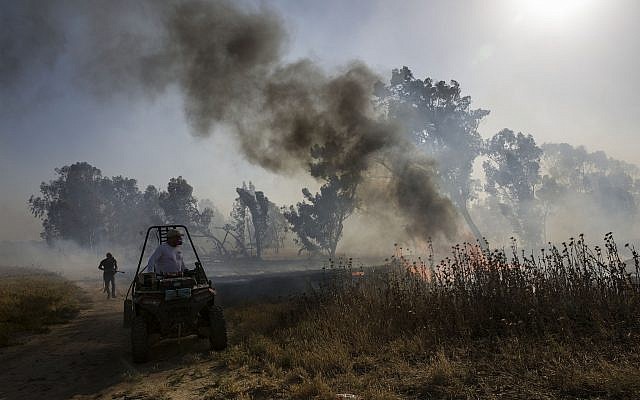 Illustrative: Israeli firefighter battles a fire started by an incendiary device launched from Gaza Strip, near the Israel and Gaza border fence, May 15, 2019. (AP/Tsafrir Abayov)

“Due to the continued fires and flying of incendiary balloons from the Gaza Strip, it was decided this evening to impose a naval closure on the Strip until further notice,” the Defense Ministry’s liaison to the Palestinians said in a statement.

The arson attacks appear to be a violation of an unofficial ceasefire reached in early May between Israel and Gaza’s Hamas rulers that ended two days of intense fighting between the Israeli military and Palestinian terror groups.

According to Israel’s Channel 12 news, the agreement includes a Hamas obligation to halt violent incidents along the border fence, maintaining a buffer zone 300 meters from the border; an end to the launching of incendiary balloons at Israeli communities and nighttime clashes between Gazans and security forces; and a stop to flotillas trying to break through the maritime border between Gaza and Israel.

In return, Israel expanded the fishing zone and agreed to enable United Nations cash-for-work programs, allow medicine and other civil aid to enter the Strip, and open negotiations on matters relating to electricity, crossings, healthcare, and funds.

The balloon-borne bomb Wednesday was the first armed attack from the Strip since that round of fighting ended on May 5.

Also Wednesday, an unexploded rocket exploded in a cemetery in a town outside Ashdod. There were no reports of injuries.