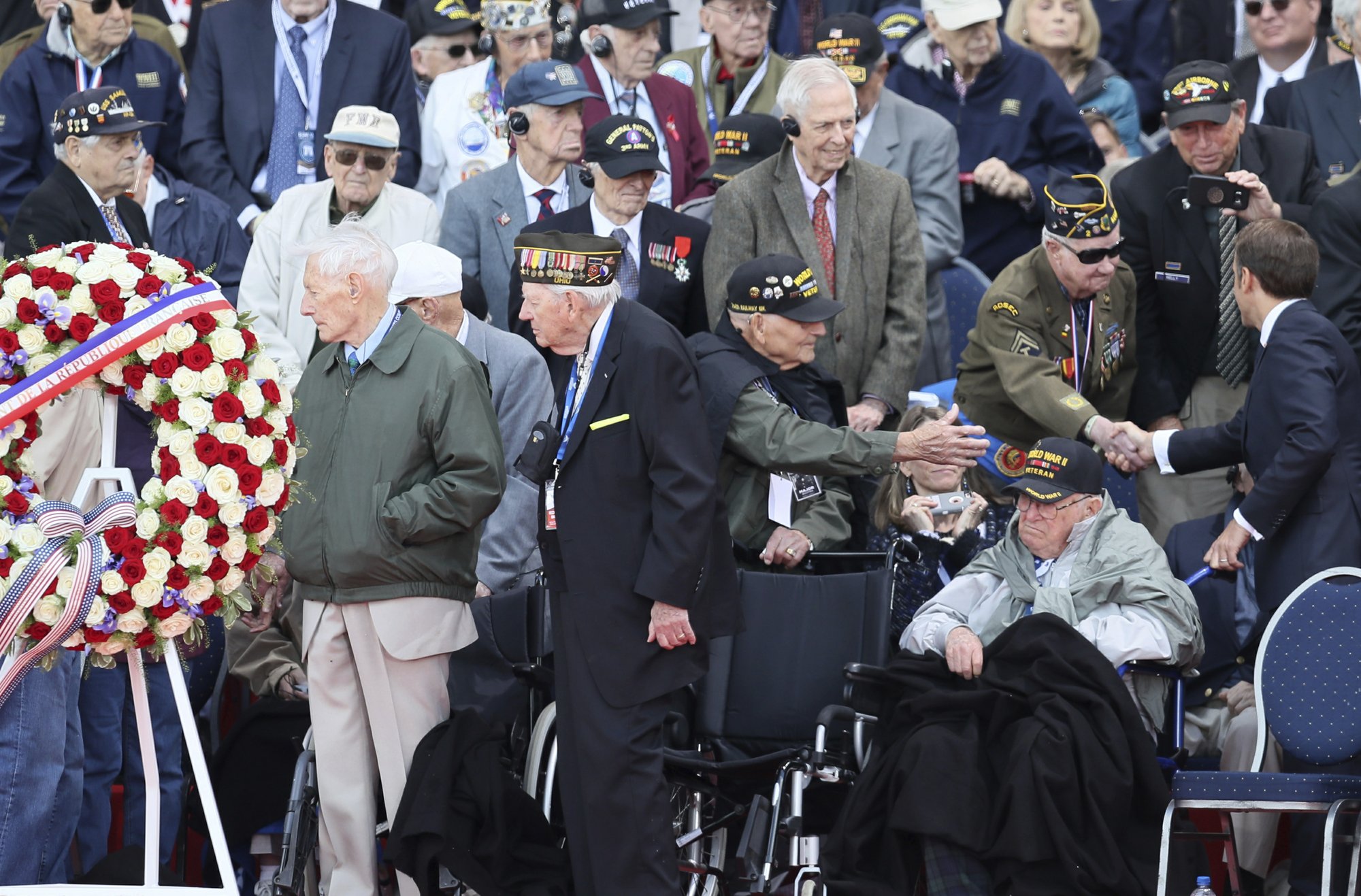 OMAHA BEACH, France (AP) — With the silence of remembrance and respect, nations honored the memory of the fallen and the singular bravery of all Allied troops who sloshed through bloodied water to the landing beaches of Normandy, a tribute of thanks 75 years after the massive D-Day assault that doomed the Nazi occupation of France and portended the fall of Hitler’s Third Reich. 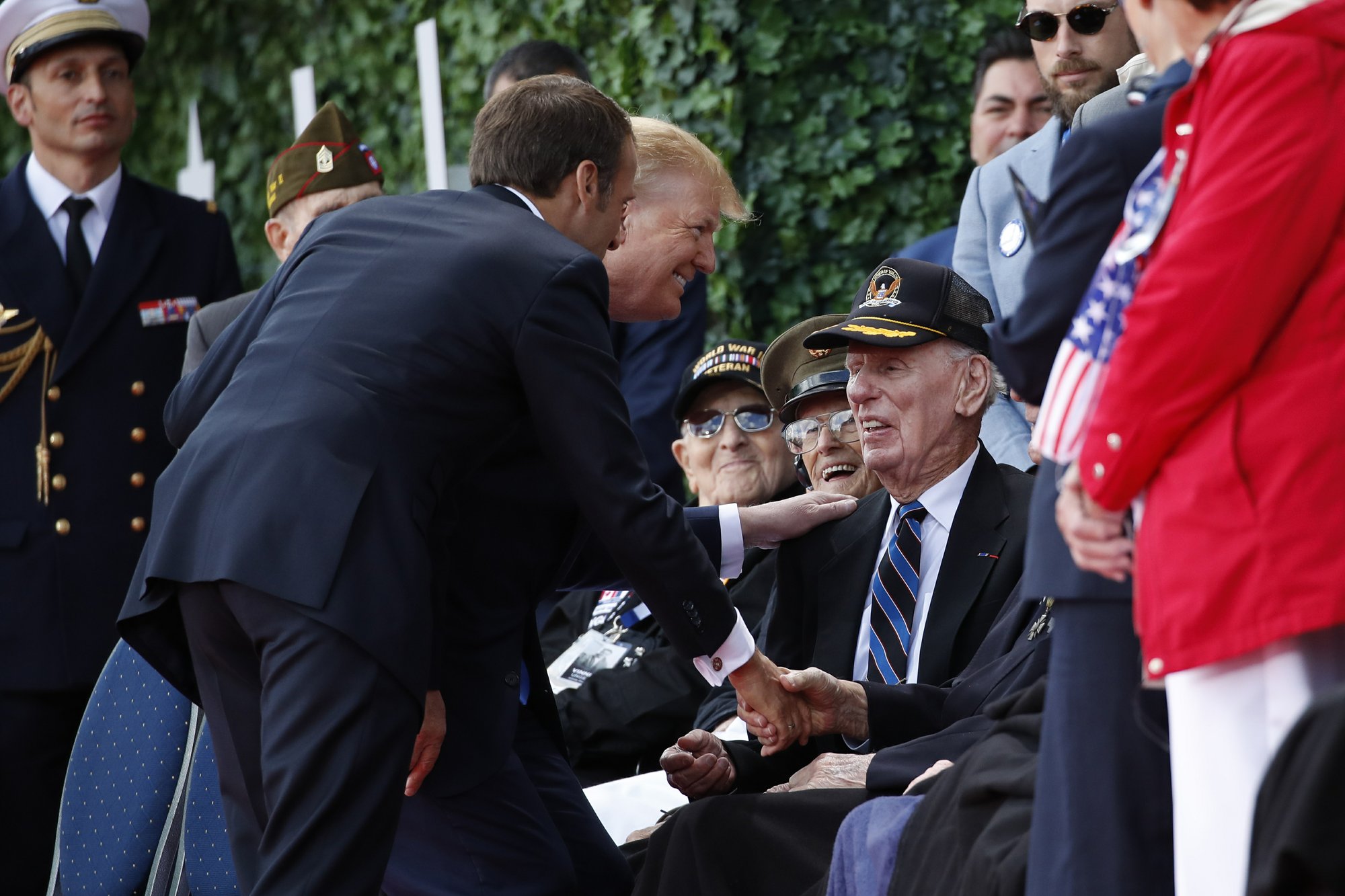 French President Emmanuel Macron and President Donald Trump praised the soldiers and airmen, the survivors and those who lost their lives, in powerful speeches Thursday that credited the June 6, 1944 surprise air and sea operation that brought tens of thousands of men to Normandy, each not knowing whether he would survive the day.

“You are the pride of our nation, you are the glory of our republic and we thank you from the bottom of our heart,” Trump said, of the “warriors” of an “epic battle” engaged in the ultimate fight of good against evil.

In his speech, Macron praised the “unthinkable courage,” ″the generosity” of the soldiers and “the strength of spirit” that made them press on “to help men and women they didn’t know, to liberate a land most hadn’t seen before, for no other cause but freedom, democracy.”

He expressed France’s debt to the United States for freeing his country from the reign of the Nazis. Macron awarded five American veterans with the Chevalier of Legion of Honor, France’s highest award.

“We know what we owe to you vets, our freedom,” he said, switching from French to English. “On behalf of my nation I just want to say ‘thank you.’”

The second day of ceremonies moved to France after spirited commemorations in Portsmouth, England, the main embarkation point for the transport boats.

Leaders, veterans, their families and the grateful from France, Europe and elsewhere were present for the solemn day that began under a radiant sun. 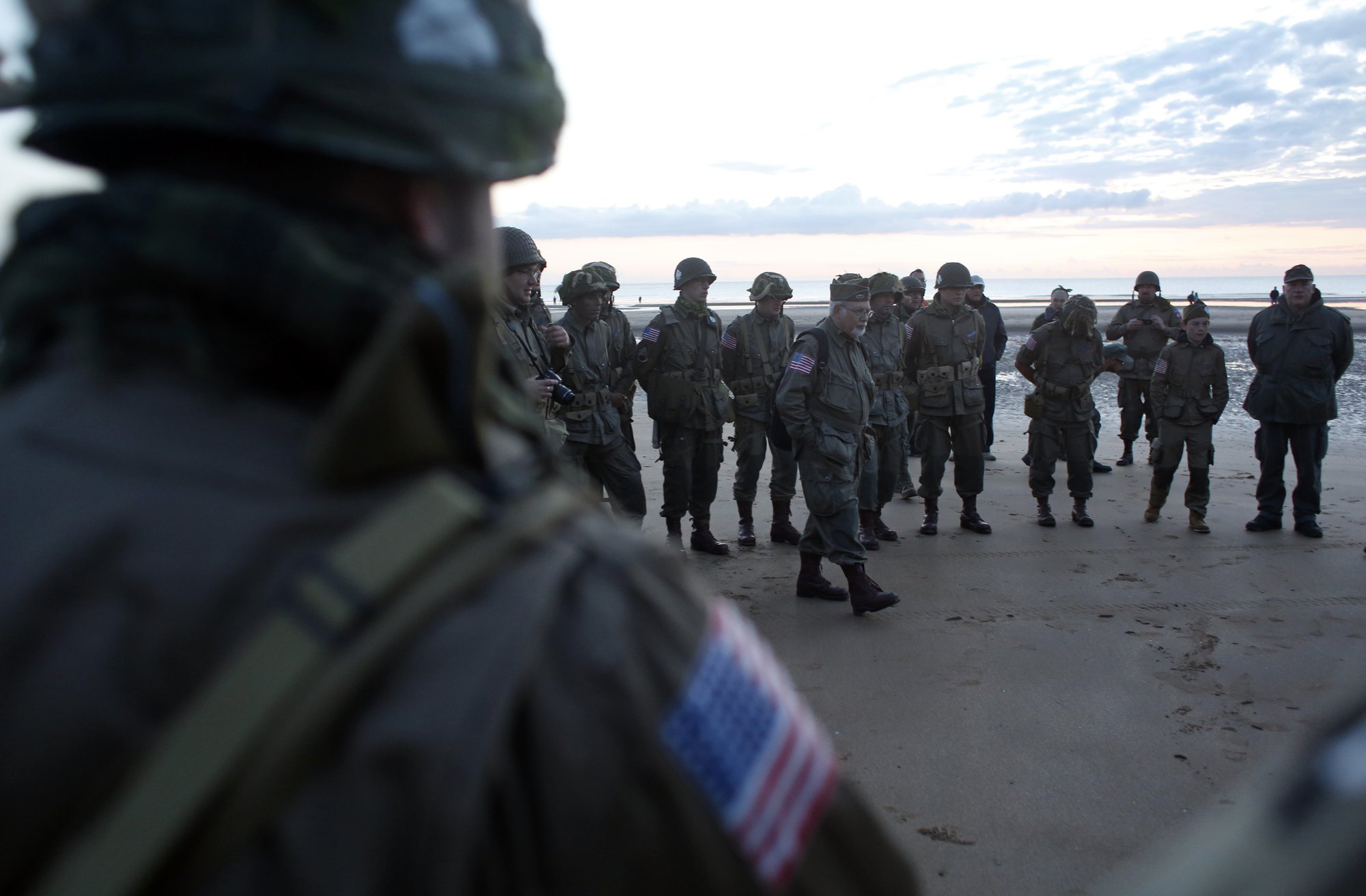 At dawn, hundreds of people, civilians and military alike, hailing from around the world, gathered at the water’s edge, remembering the troops who stormed the fortified Normandy beaches to help turn the tide of the war and give birth to a new Europe.

Dick Jansen, 60, from the Netherlands, drank Canadian whisky from an enamel cup on the water’s edge. Others scattered carnations into the waves. Randall Atanay, a medic’s son who tended the dying and injured, waded barefoot into the water near Omaha Beach — the first of five code-named beaches where the waters ran red the morning of June 6, 1944. 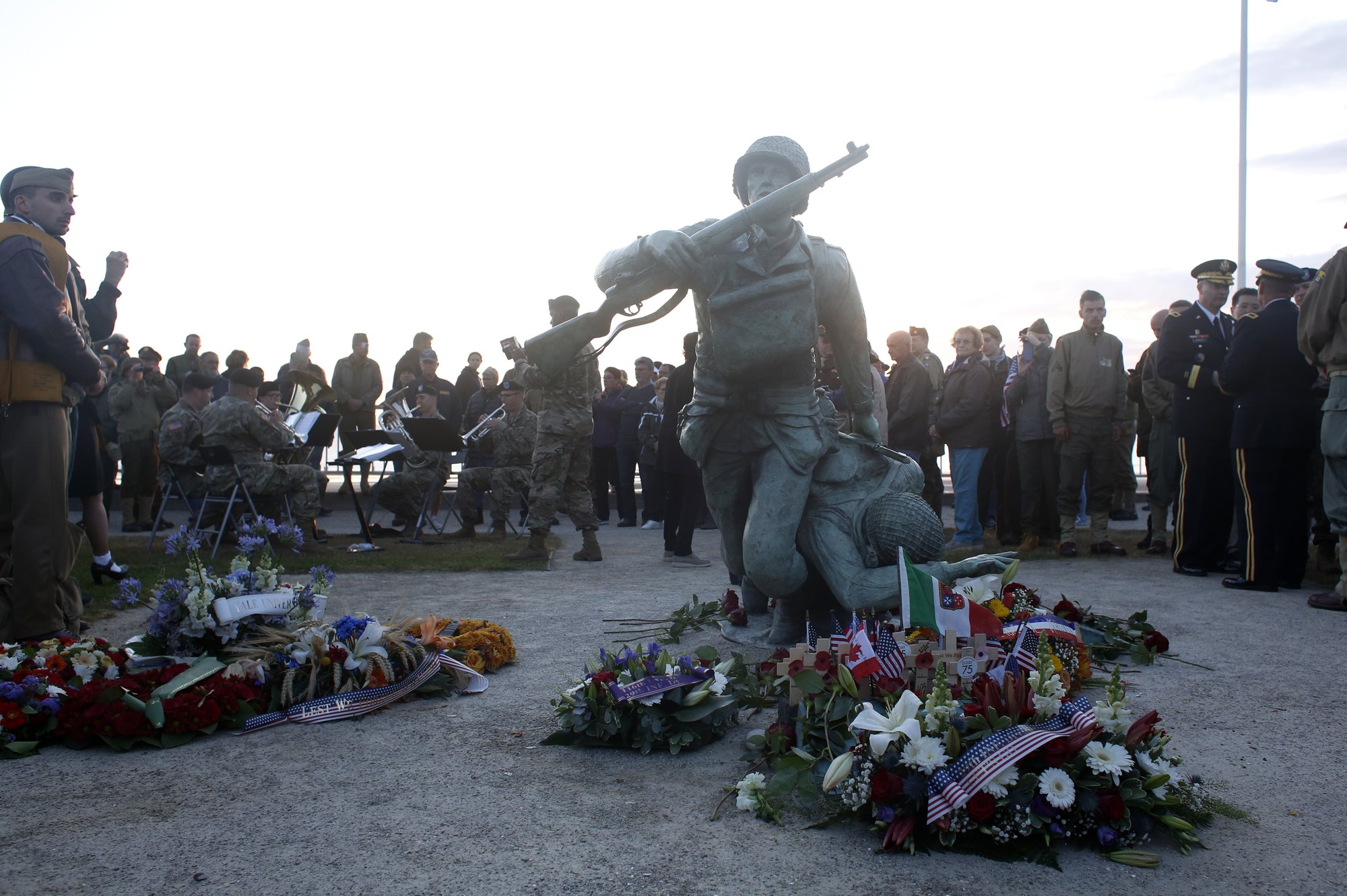 floral tributes are placed at the National Guard Monument Memorial as members of the USAREUR band plays in the background near Omaha Beach, in Normandy, France, Thursday, June 6, 2019 during commemorations of the 75th anniversary of D-Day. (AP Photo/Thibault Camus)

Up to 12,000 people gathered hours later at the ceremony at the Normandy American Cemetery, where Macron and Trump spoke. U.S. veterans, their numbers fast diminishing as years pass, were the guests of honor.

Rows of white crosses and Stars of David where more than 9,380 of the fallen are buried stretched before the guests on a bluff overlooking Omaha Beach.

Britain’s Prince Charles, his wife Camilla and Prime Minister Theresa May attended a service of remembrance at the medieval cathedral in Bayeux, the first Normandy town liberated by Allied troops after D-Day. Cardinal Marc Ouellet read a message from Pope Francis with a tribute for those who “gave their lives for freedom and peace.” 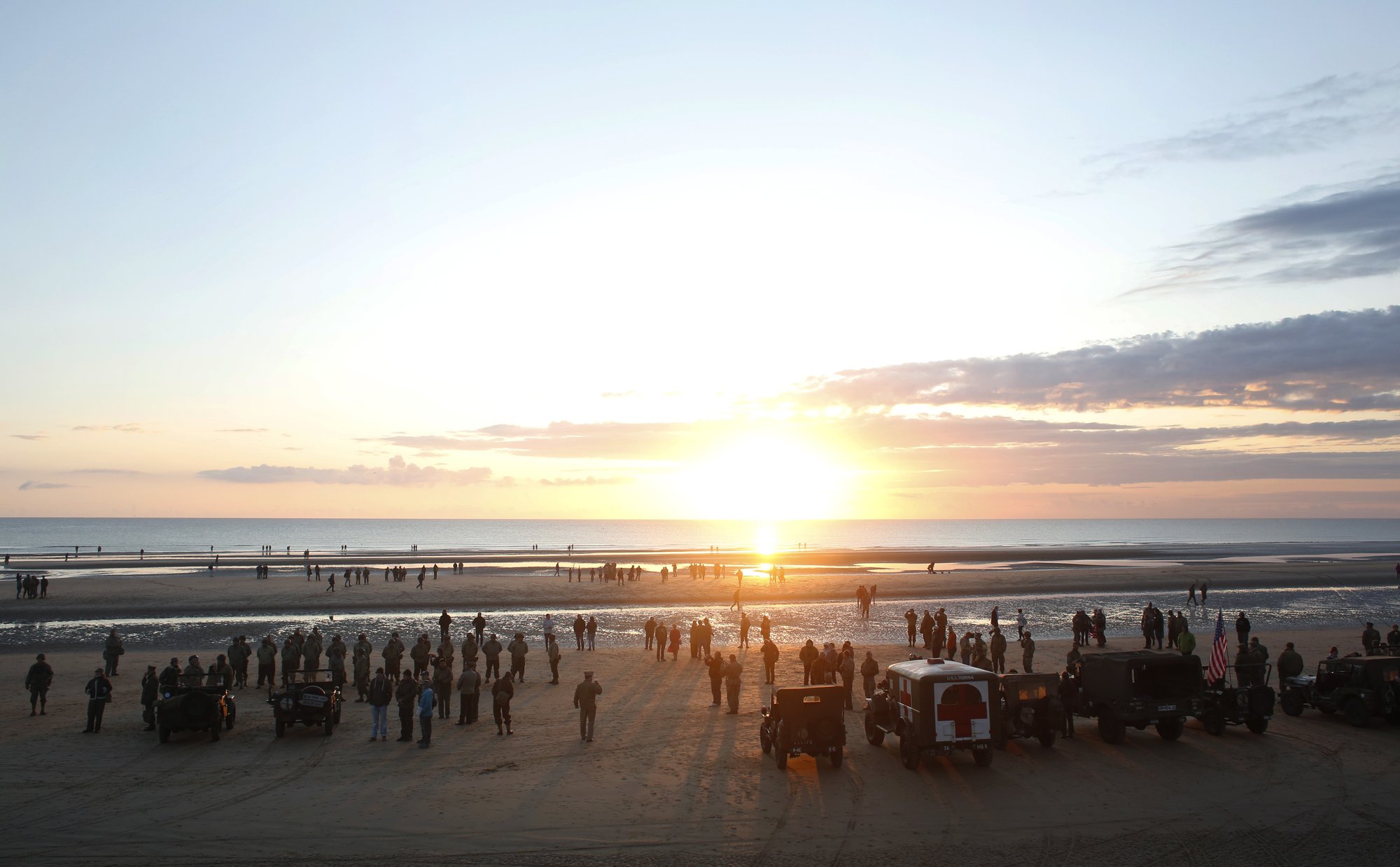 “It is sobering, surreal to be able to stand here on this beach and admire the beautiful sunrise where they came ashore, being shot at, facing unspeakable atrocities,” said 44-year-old former U.S. paratrooper Richard Clapp, of Julian, North Carolina.

Gratitude was a powerful common theme.

Macron thanked those who did not survive the assault “so that France could become free again” at an earlier ceremony overlooking Gold Beach with British Prime Minister Theresa May and uniformed veterans to lay the cornerstone of a new memorial that will record the names of thousands of troops under British command who died on D-Day and ensuing Battle of Normandy.

“If one day can be said to have determined the fate of generations to come, in France, in Britain, in Europe and the world, that day was the 6th of June, 1944,” May said.

“As the sun rose that morning,” she said, not one of the thousands of men arriving in Normandy “knew whether they would still be alive when the sun set once again.”

A group of five Americans parachuted into Normandy on Wednesday as part of a commemorative jump, and showed up on the beach Thursday morning still wearing their jumpsuits, all World War II-era uniforms, and held an American flag. All five said they fear that the feats and sacrifices of D-Day are being forgotten.

“I have all kinds of friends buried,” said William Tymchuk, 98, who served with the 4th Canadian Armored Division during some of the deadliest fighting of the brutal campaign after the Normandy landings.

“They were young. They got killed. They couldn’t come home,” Tymchuk, who was back in Normandy, continued.

“Sorry,” he said, tearing up. “They couldn’t even know what life is all about.”

The biggest-ever air and seaborne invasion took place on D-Day, involving more than 150,000 troops that day itself and many more in the ensuing Battle of Normandy. Troops started landing overnight from the air, then were joined by a massive force by sea on the beaches code-named Omaha, Utah, Juno, Sword and Gold, carried by 7,000 boats.

In that defining moment of military strategy confounded by unpredictable weather and human chaos, soldiers from the U.S., Britain, Canada and other Allied nations applied relentless bravery to carve out a beachhead on ground that Nazi Germany had occupied for four years.

“The tide has turned! The free men of the world are marching together to Victory,” Gen. Dwight D. Eisenhower predicted in his order of the day.

Still, that single day cost the lives of 4,414 Allied troops, 2,501 of them Americans. More than 5,000 were injured. On the German side, several thousand were killed or wounded.

From there, Allied troops would advance their fight, take Paris in late summer and march in a race against the Soviet Red Army to control as much German territory as possible by the time Adolf Hitler died in his Berlin bunker and Germany surrendered in May 1945.

The Soviet Union also fought valiantly against the Nazis — and lost more people than any other nation in World War II — but those final battles would divide Europe for decades between the West and the Soviet-controlled East, the face-off line of the Cold War.

Sylvie Corbet in Colleville-sur-Mer, France and Milos Krivokapic and Adam Pemble in Ver-sur-Mer and Elaine Ganley in Paris contributed to this report.